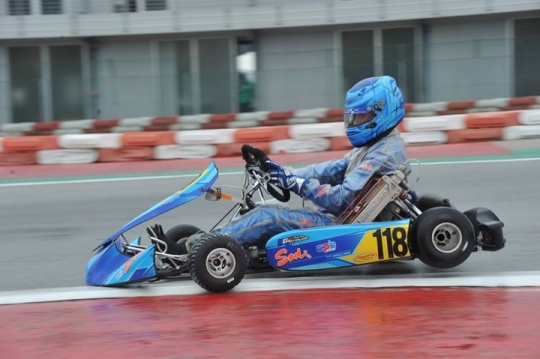 Author: Vroomkart International
The WSK Final Cup closes its doors on the season with the year's last round taking place in Adria. Under the pouring rain, Lorenzo Travisanutto (OK), Taylor Barnard (OKJ), Alex Powell (Mini) and Adrien Renaudin (KZ2) take home their respective Titles.
60 Mini - Al Dhaheri wins, then penalized - Powell is Champion
In the Mini finale, rain has no effect on Rashid Al Dhaherym who practically dominates from start to finish. The Tony Kart driver wins the race but then has to say goodbye to success thanks to a 10-second penalty for an early start and is, consequently, relegated to a ninth final position. The victory then passes into the hands of the surprising Joel Bergstrom, already the race's pole man. Behind the Swede, Kirill Kutskov and Alex Powell finish on the podium with seven and three positions respectively gained during the race. With Ean Eyckmans in fourth place, the Jamaican Powell ensures his conquest of the title of Champion with a 42-points margin, 239 points against the Belgian's 197.

OKJ – Super Minì together with Barnard
In the Junior finale, no hope for Gabriele Minì's opponents. The Sicilian dominates the final taking the lead of the race just after the start. Unbeatable pace for the competition more than two seconds from the vice champion of Europe and the world. Smiling again is also Kirill Smal, who recovers three positions and closes in second behind his Italian colleague. On the third step of the podium, the excellent James Wharton who initially lead the race. With the fourth place finish, Taylor Barnard takes home yet another season title for Dino Chiesa and Nico Rosberg, and tops the general standings with 235 points, 41 more than Minì at 194, and Smal third at 172.

OK - Rosso takes win but Travisanutto is Champ
Soon off to F4, Andrea Rosso celebrates Adria in the best possible fashion by imposing himself in the final after starting from third. Initially, Anderutti and then Travisanutto had set the pace, commanding the race. The World Champion, leader up to three laps from the end, withdrew from the race. Space open to Rosso from Turin, third until then, and soon leader to the checkered flag. Behind the Italian, Kas Haverkort returns to the upper floors with four positions gained, third Leandro Anderutti. Despite the good fourth place of Dexter Patterson, Lorenzo Travisanutto again graduates as Champion, thanks to the absolute domination between heats and pre-final. The Italian scored 203 points against the 182 of Haverkort and 157 of Anderutti. Bad weekend for Nielsen, out of the Final even before the start due to technical problem

KZ2 - Renaudin dominates and wins again
Adrien Renaudin ends the year in the Final Cup 2018 with yet another victory in KZ2. The European Champion is faultless, again setting the pace after Castelletto di Branduzzo. Fifteen seconds ahead at the end of the race on Dylan Davies for DR Racing, third Jean Luyet under the checkered flag. Of note, the second place of Axel Bengtsson who, however, was relegated to sixth for the spoiler release and the 3-sec penalty. Only eighth Emilien Denner. Renaudin closes at 243 points, second Denner at145 and third Davies at 121 points.