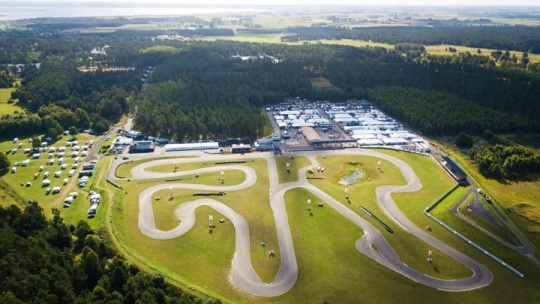 Author: Vroomkart International
Kristianstad's kart track is the battleground for the OK and OKJ World Championships. First clashes via stopwatch for all the drivers, led by Lorenzo Travisanutto (OK) and Gabriele Minì (OKJ).
OK - Travisanutto wastes no time
After closing the European Championship a frontrunner, in one way or another, Lorenzo Travisanutto sets the pace for the World Championship race. The Italian starts strong setting the best time in the category (50.716), valid for pole of group A. Behind him, the other six group pole positions starting from Dexter Patterson, still at the top after Essay, followed by Luigi Coluccio and Axel Saarniala for group D. Last three poles in the hands of Jorge Pescador, Tijmen Van Der Helm and Yannick De Brabander, from groups E to G. Only eighth overall, European Champion Hannes Janker, in the same group as Travisanutto, 16th David Vidales, 24th Pedro Hiltbrand, third and fourth in their respective groups.

OKJ - Gabriele Minì firmly on pole
Hard-fought battle for the racers in Junior where, Gabriele Minì, runs ahead of the competition. The Sicilian set the best lap in 52.443, almost three tenths ahead of rival Taylor Barnard. Kai Askey resurfaces with the third best time and pole for group C, followed by Victor Bernier, Dino Beganovic, Luca Griggs and Guilherme De Figueiredo for group G. Further back, the other two "medal holders" of the European with Gabriel Bortoleto in 14th, and Paul Aron in 15th. The Brazilian will be second for Group G, the European Champion third in Group A.

Our next appointment is for tomorrow (Saturday, September 22), with a busy program of direct clashes, which already started today thanks to the large number of competitors.