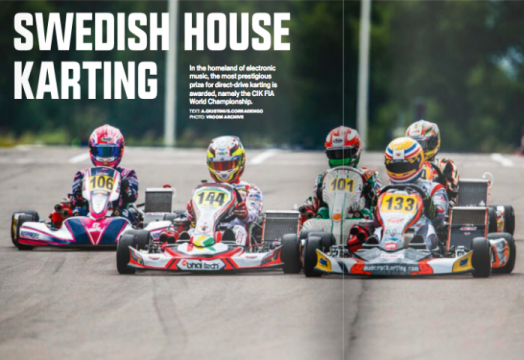 Author: Vroomkart International
In the homeland of electronic music, the most prestigious prize for direct-drive karting is awarded, namely the the CIK FIA World Championship.
With the CIK FIA World Championships for the OK and OKJ classes scheduled on 23 September, the Asum Ring marks the fifth consecutive appearance on international calendars, proving that the circuit in the Scania region enjoys a high reputation in the karting scene. The pride of the circuit is its infrastructure, which makes the on-track experience comfortable, and its layout which requires a great dose of skill and talent.

OK - KR against everyone in Sweden

The recent victory of the European championship, plus those in the WSK Super Master Series and in the Winter Cup, makes Hannes Janker and the brand Kart Republic the Number 1 candidates for world success. Janker, however, will have to deal with a very long list of suitors to the crown, starting from Lorenzo Travisanutto, his brand partner who, however runs for Rosberg Racing, while the German for the German division, that is TB Racing. On several occasions this year, the Italian spoke of his good feeling with the Swedish circuit, which saw him victorious in KFJ in 2014.

Another candidate for the top spot on the podium, given his dominating Essay, is Dexter Patterson, the current OKJ World Champion. Moreover, with the victory in OK, Patterson would become one of the few drivers to the list of consecutive successes of a Junior in Senior in their debut year.  The world championship challenge, however, will not be limited to Kart Republic drivers; David Vidales and Pedro Hiltbrand, respectively the standard bearers of Tony Kart and CRG, will try to put the word "end" to the fasts that have afflicted them since the beginning of the season.

Thanks to the generational change, given by the passage of many protagonists into OK, the roster of favorites almost completely changed from last season. Eyes on Ricky Flynn Motorsport at home, thanks to the new European Champion, Paul Aron, among the main candidates for success. Behind him, the great surprise of the season, Gabriele Minì, ready to make the first big hit at his debut. The Sicilian, among the rookie of the category, certainly needs no introduction, given what he showed on track.

Only three points separated the Italian from the title, more than ever indicative of his talent. European bronze medal for Gabriel Bortoleto, standard bearer of CRG, ready to put into practice what was done during the open race, in Kristianstad, during the Swedish Championship. The Brazilian, clearly improved compared to 2017, aims high with an almost overwhelming dominance in the preparation race. Behind the three "medalists", here is the list of outsiders to watch for the final battle. With the great weekend of PFI and the victory caressed on the weekend of Essay, Victor Bernier is projected towards a leading role for the World.