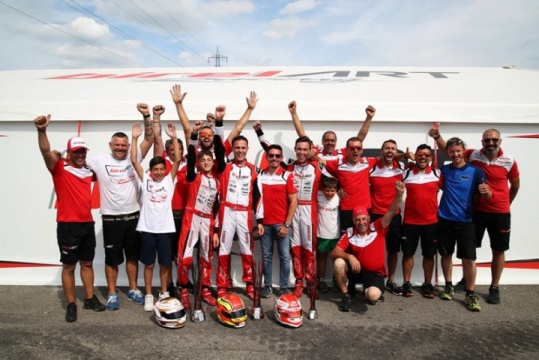 Author: Vroomkart International
The WSK Open Cup weekend is colored red and white with two wins signed BirelArt. Longhi and Coluccio illuminate KZ2 and OK.
Super weekend for the folks at BirelArt, absolute masters of the trophy, taken home in two of the four different categories available. A success built right from the start of the match to the very final act.


OK - Coluccio dominates
Luigi Coluccio dominates in Senior with an almost clearcut path. After a qualification ending in third place overall, in the direct matches, he took a third, a fourth and a tenth place. Sixth place for the pre-final and off to the Italian's masterpiece, able to gain five positions in the prefinal, and then first place, never questioned, at the end of the twenty-one final laps. Two seconds on his opponents and leadership from start to finish.

At the end of the race, the Italian commented: «It's been a practically perfect weekend right from the start. It wasn't especially difficult to find the right setup, because it was already well-suited to the track. With Birel we're developing a lot. Now we're always very competitive with the whole package. I didn' texpect to win so far ahead. I didn't feel I could do it and instead I did it. Let's say that, after winning the pre-final, I believed it even more. That victory, it allowed me to start first for the final ... this clearly allows you to stay out of trouble and go away, especially in the first few laps. From then on I managed, I always went with the same times».


KZ2 - Longhi launches challenge for European Championship
Second pearl of the weekend, the one "packaged" by Riccardo Longhi. The man from Emilia, always on the top floors of the standings, starting from the first place in qualifying, did well in the heats, all ending in second place. A magic Sunday for him, too, with success in Prefinal B, securing second place on the grid for the final. The second and last masterpiece would come later with a Longhi immediately dangerous against Ardigò, then astute in overtaking him already on the second lap. Triumphal end of the race for driver number 129, three seconds on the direct opponent, alone under the checkered flag. In light of the success just won, Longhi automatically places himself in a leading role during the last leg of the CIK FIA European Championship.

Of note, also, the third trophy and the great performance of Marijn Kremers, bronze medal of the final, from fourth place.

Longhi on the weekend: «It was a tough race but dominated at the end! I was at the top all weekend, making the absolute pole position, won pre-final and final both with a fast lap. On Saturday I committed, in all the heats, errors at the start, closing them all with a second place. I expected to be competitive ... honestly on Saturday I saw that with Ardigo, it could be very hard. I had a good race pace, but on Sunday morning maybe we found a little something more. Also I expressed myself at 110%, which Saturday, maybe, I couldn't. Taking home this WSK title, and after having beaten the KZ drivers, I have a lot more drive! I know that we'll race with different tires but, I think if everything's in right place, I'll be as fast as ever in Lonato! Even in Salbris I was in front but, because of my bad mistake, I compromised the race. I absolutely want to make up for it again».