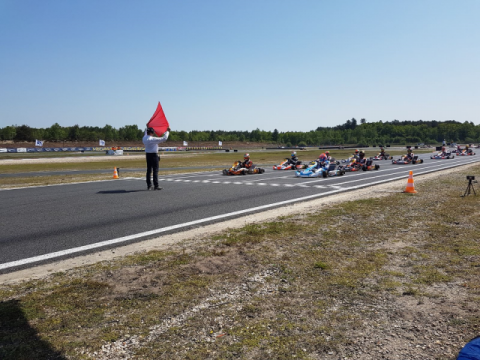 Author: Vroomkart International
In Salbris, a sunny but windy Saturday was the setting for the first heats that will establish the starting grid for the Kart Grand Prix of France in the KZ and KZ2 categories.
While KZ had only two heats, due to the limited number of participants, the KZ2 was busy with 12 batteries. In the "queen" class, success went to Jorrit Pex in both cases, while in KZ2 the drivers with the highest number of first places at the moment are Riccardo Longhi and Pierre Loubert at 3 apiece.

KZ2 - Twelve heats in KZ2. Lots of activity on the track and the first important results for the standings. Despite the last three direct clashes scheduled for Sunday, it is already a close fight at the top between Pierre Loubere (Praga / TM) and Riccardo Longhi (BirelArt / TM). The three wins each lay the groundwork for a hard-fought battle in the Final. Among the other winners of the day, the Italian Giuseppe Palomba (Intrepid / TM) with two successes. Behind the third pretender to the French throne, Petit (Sodi / TM), Vidales (Tony Kart / Vortex), Renaudin (Sodi / TM) and Nomblot (Sodi / TM) end Saturday in KZ2, winners. As said, the last three heats are set for Sunday, starting at 09.55, and then the Final of the first European round.

The drivers did not fail to underline how track conditions were not at their best; along with a "green" surface, with little rubber, was the tire factor, the LeCont tires yet to be discovered by the drivers, hence their not  expressing themselves as they might have liked to.

The appointment is for Sunday with the latest batteries and the Finals that will award the first points in the European for the KZ and KZ2 racers.