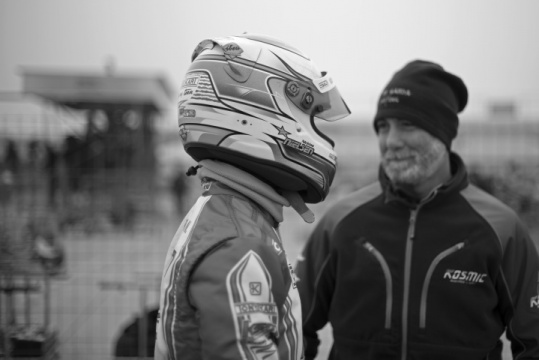 Author: Vroomkart International
Some words by Nicklas Nielsen after the 23rd edition of Winter Cup.
After the Winter Cup race we interviewed Nicklas Nielsen (Tony Kart / Vortex) to ask about a weekend that saw him among the top players.

The Dane was one of the favorites for the final success not just for the impressive record he has established since his return to karting in the second half of 2017, but also for the two successes in the two-year period, 2015 and 2016, when he wore the colors of the factory Tony Kart team.

After 2nd place in Qualifying Tests, Nielsen was 3rd in the ranking at the height of the Heats and the Super Heats. This allowed him to start from the less humid lane in the Final and so, after a few hundred meters, he took the lead of the race, indeed. From his lap times, however, it was clear that the KSM Schumacher driver would not be running off; on the contrary, the danger posed by his direct opponent Hannes Janker (KR / Parilla) began to loom large.

The key moment was on lap 14: Nielsen, grappling with a problem clearly visible even on TV screens, turns his attention to the carburetor area, opening the door to Janker who slips past him at the last corner. The German crosses the finish line in first place, followed by Nielsen who holds things together to the checkered flag despite the technical problem.

"First of all I want to thank the mechanics and all KSM for their support," commented Nielsen. "We were very fast and I won't hide my frustration about having to succumb to the problem. But this is also part of races."

"I realize that Kart Republic puts really good material on the track, especially in the conditions that have presented themselves so far. Are we far from them? Not at all. I think the products of the OTK Group are extremely competitive and I believe we are going to face a really exciting season."

"For the next races our goal is to continue improving, especially when track conditions are not perfect. I am convinced that we will be able to hold our own in all the races coming up, starting from the Super Master Series but especially in the CIK FIA races," he concluded.