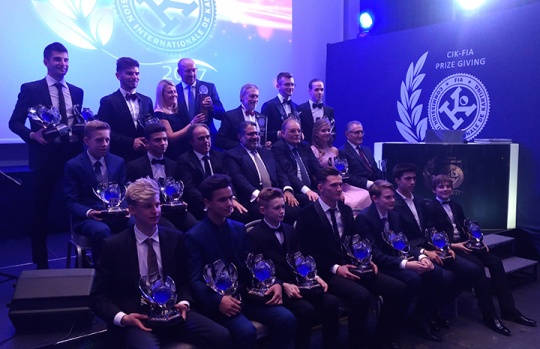 Press Release by: FIA Karting
The 2017 CIK-FIA Champions were celebrated on Saturday, December 2nd, 2017 at the Excelsior Hotel Gallia in Milan (ITA) at a moving ceremony organised by WSK Promotion in the presence of Sheikh Abdulla Bin Isa Al- Khalifa, President of the CIK-FIA, Vice President Kees Van De Grint and many guests.
The three 2017 CIK-FIA World Champions received their trophies to the applause of the audience: Danny Keirle (GBR) in OK, Dexter Patterson (GBR) in OK-Junior and Paolo De Conto (ITA) in KZ. They will all be guests at the upcoming FIA Awards Ceremony on 8th December in Paris (FRA). The European Champions, the winner of the International Super Cup, the top three of the CIK-FIA Karting Academy Trophy as well as the CIK-FIA Endurance Champion team were also rewarded. In addition to his CIK-FIA European Championship title, the young Moroccan Sami Taoufik was awarded the “CIK-FIA Rookie of the Year“ Trophy. Jenny Susann Jakobsen (NOR) won the FIA Commission "Women in Motor Sport" and CIK-FIA award for having achieved the best female performance in the 2017 CIK-FIA Karting Academy Trophy.

The “Best Event of the 2017 CIK-FIA Championships“ Trophy was awarded to the Trent Valley Kart Club, represented by its President Nigel Edwards (GBR) for the very high quality of the CIK-FIA World Championship and World Junior Championship organisation, at the British circuit of PF International.

The CIK-FIA wished to award Roberto Baroni (ITA) with the “Special Tribute“ Trophy to salute his exceptional longevity as a driver, having been faithful to the original values ​​of karting for 50 years. Paul Fletcher (GBR) received the Trophy "In honour of his long and outstanding contribution to Karting" for his commitment to the development of the discipline for many years. Finally, WSK Promotion received a special award, presented to its President Luca De Donno, after a fruitful five-year collaboration as Promoter of the CIK-FIA Championships from 2013 to 2017.

The guests then proceeded to the election of the best photo of the year. French photographer Philippe Kalmès of the KSP Reportages agency won this 11th “Best Photograph of the Year“ Trophy organised by the CIK-FIA.

The evening was punctuated by the projection of spectacular videos, retracing the past sporting year. The guests received the traditional "Best-Of" published by the CIK-FIA, a superb collector's book of more than 140 pages in large format, retracing by text and image the highlights of the 2017 season.