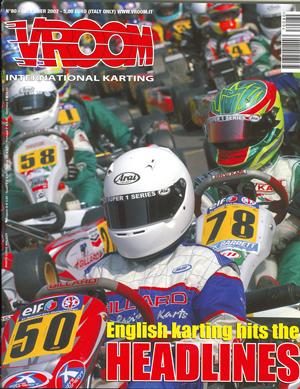 MONDOKART
FROM KART TO F1 – Kimi Comet
He’s World F1 champion, and whatsmore, with Ferrari! His picture has hit the headlines everywhere and the Press, surprised by this unexpected ending, delve into his past trying to find to find out as much as they can about Kimi’s racing career.
SPECIAL
– English Karting hits the headlines
A year after the media explosion of sports phenomenon Hamilton, we go back to take a closer look at today’s karting situation in the UK.
FACTORY – Inspired heads
Arai, one of the best helmet manufacturers, has given us the opportunity to visit their European branch situated on the outskirts of Amsterdam, where the AIC Arai Inspiration Centre is. This a wonderful technological site where you can really feel and understand the philosophy that has inspired Japanese manufacturing right from the early years of Hirotake Arai.
FACTORY – VAMEC – The arm and the mind
Visiting Vamec means finding yourself in front of a modern factory where enormous resources have been invested for maintaining the technological aspect update, and it’s mainly thanks to Vincenzo Vannini.
TALKING TO – Mogens Jessen
They have been going for twenty years now, but the enthusiasm is still there. Mogens Jessen and Claus Mortensen are the mind and soul of Unipro, a Danish company that developed and made the first data acquisition system.
X – RAY OF VORTEX – Ace takes all
The undisputed protagonist of the 2007 karting season, the very first season with the new KF engines. KF1 World Champion, European KF2 and KF3 champion and several other titles won, already steadfast, despite its brief career, just like the drivers it’s the first year, an incredible one, maybe unrepeatable too, as managing directors of the factory in Pavia say; but in the meanwhile they sit back and enjoy this great success and start to think about the coming season. Let’s take a look and find out what lies behind such success.
TALKING TO – Giovanni Corona
“We have made a brand new engine, invested lots of hard work and resources, but it’s been worth it. Besides the engine is small, light and compact; about 1.8- 2.0 kg less than its rivals.”
TRACK TEST – Over the top
This time our track test was carried out in Lonato, where Tonykart gave us the karts, but not only, also the men – first and foremost Marco Ardigò – who was really outstanding during the international titled events.
NATIONS – Usa, Spain, Hungary, New Zeland, Japan
TECHNICAL SIDE – ...and the valve goes down
Once again we are going to look at one of the elements that characterise engines used for karting in the future. Regulations for the KF class foresee a shutter power valve on the exhaust port.
CARTOON – “ Tardy braking”