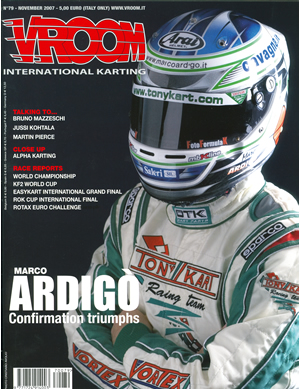 MONDOKART
TALKING TO – Marco Ardigò
2007 World Champion, Marco Ardigò finds his significant standing in a season that has been full of incognito, that might have put in discussion the credibility of firm and drivers, but has instead found the umpteenth confirmation of the Brescian driver’s skill.
TALKING TO – Bruno Mazzeschi
Next year, MIR will be celebrating its 25th anniversary in motorsports, and the last 20 have nearly all been dedicated to karting. We talked to the proud owner, Bruno Mazzeschi, of The factory situated in Tuscany, a wonderful day that we spent trying to find out the secret that has made a family business stay at the top with important well-known brands of sportwear.
CLOSE UP – Innovation is the key
After 30years of activity, the French chassis manufacturer keeps an eye on innovations and development to sterngthen its position both in the French and international karting.
TALKING TO – Jussy Kohtala
Finland, one of the smallest European countries in terms of population, but one of the most active when it comes to racing, producing many talented drivers this northern part of the country, and talked to Jussi Kohtala Sports team owner, mechanic, instructor and truck driver all in one person!
TALKING TO – Martin Pierce
In 2007, former British Rotax Champion Martin Pierce teamed up with WildKart and they broke into an increasingly competitive class at international level. The 31- year – old Design Engineer now living in Dublin, tells us how it all happened and where it’s leading...
WORLD CHAMPIONSHIP KARTING – Ardigò and Tony...Catt
Nothing changes under the sky in Mariemburg. Like a “dèjà vu”, Marco Ardigò, at last but not least, graduates as world champions ahead of Britain’s Gary Catt. So a brilliant end for a very good racing season for the Italian driver and Vortex powered TonyKart.
- Ryall a winning bet
In the end the win was taken by someone that one hadn’t even thought of. Michael Ryall is a British driver who races with a Belgian licence, because he’s been trained by GSK located in Genk and captained as usual by the old cunning Lemmens.
RACE REPORT – Easykart no frontiers
More than 330 drivers came to the HappyValley circuit in Cervia for the sixth edition of the international final of Easykart brand Trophy.
-Italians more powerful
The Rok International Final gets more and more successfull each time.
- Van den Brand pulls it off
The Dutch driver, after a difficult weekend, takes the Junior Max title for Intrepid.
NATIONS – England, Denmark, Finland, Brazil, Usa
ON THE TECHNICAL SIDE – Magna...Pump
The water pump is one of the elements that characterises KF engines, not so much for the technology as this maintains the basic working principles, even if in the most cases an important step forward has been made as far as efficiency is concerned, but for the new position, now completely integral with engine.
CARTOON – “First Podium”