Author: Vroomkart International
For the Energy Corse Team, the WSK Euro Series finished with a title in KZ2 conquered by Paolo De Conto and a second place in KF2 for Nicolaj Moller-Madsen. Other excellent results rolled in for the Italian brand, in the German and French Championships as well as in the qualifying rounds for the European KF2&KF3 Championships.
WSK: De Conto Succeeds 9 Times out of 10!

Nine victories and a third place as worst result in 10 races (5 pre-finals + 5 finals): this is the incredible result achieved by Paolo De Conto in KZ2, WSK Euro Series. "You cannot get such results without perfect equipment and mine was perfect at each meeting, no doubt. The atmosphere in the team is great and karts are prepared meticulously. Everybody takes their job very seriously and with professionalism, no detail is neglected", the Italian driver commented. Therefore, the WSK finished in beauty for Energy in Sarno, with the first podium for Joel Johansson who has discovered KZ2 only recently. Energy Corse also won the Eurocup (the teams' classification). 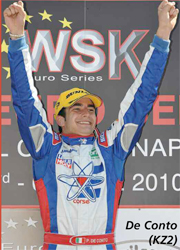 In the last two races, there were also a pole position conquered by Dennis Olsen in Genk in KF3 and some excellent performances by the trio Sami Luka-Paul Loup Chatin-Nicolaj Moller Madsen in KF2 in Belgium as well as in Italy, not to mention the competitiveness of JRP's driver Jordan King. Luka has recently joined the Energy Team and has been able to quickly celebrate his best result in 2010 by gaining a fifth place in Sarno. As for Moller-Madsen, he concluded with a second place in the overall standings, in a WSK more hard-fought than ever.

Already German Champion in 2009, it did not take Nicolaj Moller-Madsen long to find again his way to victory lane in KF2, in this top-level championship. The Danish driver made it onto the second step of the podium in Kerpen, and then dominated the meeting in Oschersleben. Moller-Madsen set the pole position, made the difference in the Sprint race, won the long final race with a significant advantage and became leader of the Championship. Not bad… Paolo De Conto also won in the KZ2 category.

Several drivers equipped with Energy chassis won their ticket for the final of the European KF2 & KF3 Championships, to be held in Genk in July. In Belgium, drivers from Great Britain, Germany, Finland and Norway will race with their Energy chassis, proving that the Italian brand is much appreciated all over Europe, both by drivers and by numerous teams.

French Championship: Pesce on the Podium

The MP Racing-Energy France Team was ready for the opening of the French Championship in Varennes sur Allier, the circuit that will host the last meeting of the European KZ2 Championship. Yan Pesce, third and then second in two races, is already second in the Championship standings. "The performances of my equipment got better and better throughout the weekend. It is very promising, both with a view to the rest of the GPO series and Europe", Yan declared. At the wheel of their Energy chassis, Julien Goupy and Mathieu Gaillard also entered the top 10.

"Over the last few weeks, we found very different circuits and weather conditions from one weekend to the other, but 2010 developments of our Kinetic chassis in KF and Eclipse chassis in KZ proved to be fully satisfactory. I would like to thank GKS in KF and Rizzi in KZ for their hard work, which allowed our drivers to race with very high-performance TM engines. Energy Corse has nothing to envy to larger teams, in terms of equipment, technical know-how and organisation".
DOWNLOAD THE PRESS RELEASE