Author: Vroomkart International
The wonderful day for Tony Kart colours is sealed by a double-success of Paul Spencer’s Team, Tony Kart Junior Team. Our “junior” team once more put on the track its technical’s best material and since the free practices it was manifest that Tony Kart Junior Team’s drivers would have been the most dreaded title’s pretenders, both in KF2 and KF3 categories.

5th trial of WSK EURO SERIESJune, 3th to 6th, INTERNATIONAL CIRCUIT OF NAPLES, SARNO (ITALY)
At the end of the qualifying round Chris Lock, in KF2, and Loris Spinelli, in KF3 category, started in the first row, as regards the English in KF2, and in second row of KF3 as for the young Italian.
The Team assiduously worked between the Prefinal and the Final and the two drivers got at their disposition well balanced Racer EVR chassis for the various path of the circuit and fast Vortex RAD engines for the back straight of the Italian circuit. 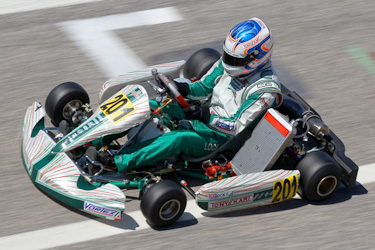 Lock and Spinelli had to race a very similar path in their respectively categories, during the rounds they were at the top and actually Lock won one.
The British driver succeeded then in the Prefinal and during the very Final he was so fast that any other could bother him. The same as for Spinelli in KF3 category that, once leader of the race, kept this position during all the competition ending up with a high gap on other competitors.
The success for both Tony Kart Racing Junior Team’s preparatory classes, KF2 and KF3, is a clear confirmation of the technical material’s value, moreover chassis and engines proved to be able to reach high performances even with different technical configurations.
We remind that differences between the two classes include the minimum weight, tyres (Vega in KF2 and Dunlop in KF3), and different are also engines’ rpm and consequently their usage parameters that varies significantly.
In such so distant contexts the “success” at the same time assumes a unique value. The crowding of Tony Kart in all top charts is the other way of thinking that gives even much more importance at this Sarno’s week end.
Tony Kart Junior Team confirms itself to be once more one of the most important teams of the WSK Euro Series, ending with a second position in KF2 Euro Cup’s classification.
A clear purpose of Paul Spencer is that of maintaining this competitiveness level forward in the season, beginning from the very début of the WSK World Series in Portimao, on next July, 1st to 3rd.

Paul Spencer –Tony Kart Racing Junior Team’s Team Manager
“I am very satisfied of this performance, it gave prominence to the team and we had the confirmation of our good material by reaching top technical levels.All our drivers raced in a good manner, thanks to a perfect team’s organization, too. I congratulate with all of them and now I am expecting the best results.”