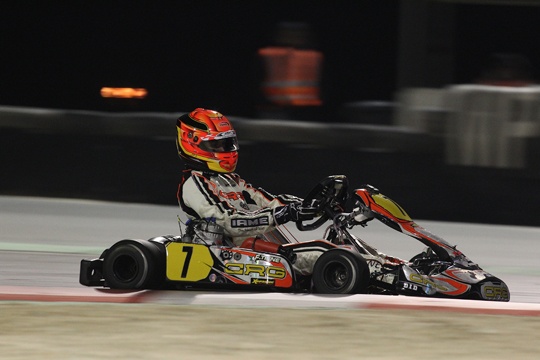 Press Release by: CRG
In the picture, Felice Tiene in KF
The next sportive season of CRG will be starting from Spain with the Rotax race of Campillos.  Eliseo Martinez will join the team in KF Junior for the 2014 International season, while Pedro Hiltbrand will be racing in KF, Daniel Formal and Yannick De Brabander (EGP) in KZ.  Maxter will provide KZ (Savard) engines, while TM the units used in KF and KF Junior (GFR and Galiffa).

Season 2014 is about to start and CRG's works team is ready to get on track with its drivers for the first round of the season: the Rotax Winter Cup to be held in Spain at Campillos' karting track in the weekend of the 16th February.

As already announced, CRG will officially partake in the International Rotax rounds in a racing programme that will not only involve the Winter Cup of Campillos but also the Rotax Euro Challenge, series run in 4 rounds to be held in Genk (Belgium, 6th April), Castelletto (Italy, 1st June), Zuera (Spain, 20 July) and Salbris (France, 7 September).

SEASON OPENER IN CAMPILLOS WITH THE ROTAX. CRG will get to Campillos with the Spaniard Eliseo Martinez in the Junior Max (the driver will be at his debut in the higher category after dominating the last year's edition of WSK Euro and Master Series in category Mini) and the as much competitive young Spanish driver Mauricio Van der Laan. CRG will also be taking on track the Spaniard Matthias Hobart and the American Jack Weprin in the Senior Max, while the German driver Luka Kamali will defend the teams' colors in DD2.

Some more interesting drivers will join forces with CRG starting from the Rotax Euro Challenge round of Genk, such as the American Daniel Formal who will be lined up in DD2. After a very good experience with PSL Karting he will officially be part of the CRG team in KZ2 also for the WSK and CIK-FIA rounds.

ALL CRG 2014 DRIVERS.  After the race of Campillos, CRG's commitment on track will continue the following week with the Winter Cup to be held in Loanato on 23rd February. In the occasion, Eliseo Martinez and Archie Tillett will be racing in KF Junior, Dionisios Marcu, Felice Tiene and Pedro Hiltbrand in KF, Jordon Lennox-Lamb, Alex Palou and Fabian Federer in KZ2. Davide Forè will also be present with team DTK.

CRG will then take part in the WSK rounds, but the team will mainly be focused on the European and World CIK-FIA Championships in this season as it is the reigning champion in the European KF and KZ as well as in the KZ World Championship. In KZ CRG will also line up the new-entry Daniel Formel, while Yannick De Brabander will be racing with team EGP led by Wim Eyckmans, and Jorrit Pex will wear the colors of CRG Holland. CRG's 2014 lineup is still to be finalized but the Greek driver Konstantinos will also be part of the team in KF Junior, while the Japanese Fuma Horio will make his debut in KZ.

GIANCARLO TININI'S COMMENT. CRG's President Giancarlo Tinini commented in this way the forthcoming season: “It is not going to be easy to repeat the great success of 2013, but we will try and do our best as always. This year we will also be competing in Rotax –  a series that is very important to us and in which we count on doing good things – among the other International commitments, where we aim at getting the maximum result.  We have 2/3 drivers on average on every category and several youngsters to raise. Predictions are not easy ,especially due to the new tires employed in the International categories. We will be using Maxter engines developed by Savard in KZ and TM units for KF and KF Junior categories, developed by GFR and Galiffa. As regarding chassis, we will start the season with our cutting edge Road Rebel in KZ, while we will use the Black Star in KF and KT1 in KF Junior, but they will certainly be developed throughout the season.”