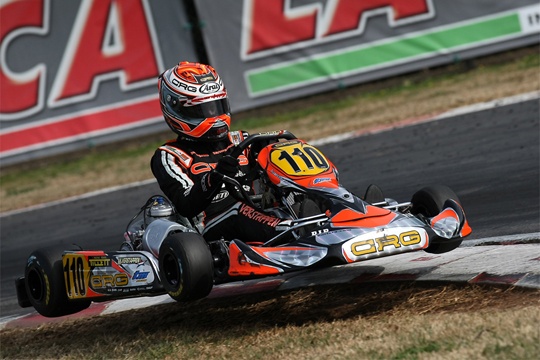 Press Release by: CRG
In the picture: Max Verstappen in action in KZ2 at the recent WSK Master Series in La Conca(Photo CRG Press).

IN KZ1 THERE IS THE DEBUT OF VERSTAPPEN AND LENNOX. ON TRACK ALSO THONON, FORE’ AND FEDERER. WITH CRG HOLLAND PEX AND VAN DER RAAD. IN KF THE FIRTS RACE OF THE YEAR FOR TIENE, PALOU AT HIS DEBUT. EXCELLENT CHANCES IN THE KF JUNIOR WITH THE PRIVATE DRIVERS. THE MINI AT THE FIRST ROUND OF THE SERIES.


Lonato del Garda (Brescia - Italy). After the first two events - the WSK Master Series of La Conca and the Winter Cup of Lonato -, CRG official Team goes back to La Conca of Muro Leccese for the first round of the WSK Euro Series, this time at its best in all the categories.

IN KZ1 THE TEAM IS SET TO ATTACK. In KZ1 the novelty is represented by the debut, in the top performing category, of Max Verstappen; he is ready to take this further step after his double success in KZ2 in the WSK Master and in KF2 at the Winter Cup. Verstappen will race on CRG-Tm in a challenge that is going to be really gripping; he will battle against the other top drivers of the category and his teammates led by the four-time world champion Jonathan Thonon on CRG-Maxter. At his debut in KZ1 also the other CRG champion Jordon Lennox-Lamb, last year's winner of the KZ2 World Cup, besides the 5-time World champion Davide Forè, they both on CRG-Maxter. At the start also Fabian Federer, on CRG-Modena, and the fast CRG Holland duo, Jorrit Pex, KZ1 European champion, and Sinan Van der Raad, both on CRG-Tm.

Together with the CRG top drivers several other private drivers who can perform at high level. Drivers such as Lorenzo Camplese, Andrea Dalè and Giambo in KZ1, than the Polish Bartosz Idzkowski, Giuseppe Amodeo and Daniele Delli Compagni of the Team Galiffa in KZ2.

IN KF TIENE'S "PREMIERE". In the KF category, with CRG official team Felice Tiene, KF2 world champion, and the Spanish Alex Palou - at his debut in this category after last year's KF3 brilliant season - , race for the first time this year. With them also the Brazilian Vitor Baptista, the Finnish Niclas Nylund, the Japanese Fuma Horio and the Canadian Zachary Claman DeMelo. Among the private drivers great expectations for the English Mark Littchfield of the PF International Team, who made himself conspicuous during the recent Winter Cup.

The team proposed by the LH Racing Team,  with the performing LH chassis by Lewis Hamilton, is particularly interesting thanks to its drivers Kevin Rossel, Igor Walilko, Jussi Kuusiniemi, Johannes Heinonen and Pedro Hiltbrand Aguilar.

KFJ AND MINI. Among the young drivers of the KF Junior, great expectations for the performance of the American Devlin De Francesco with the DFR Team, as well as for theperformance of the Russian Robert Shwartzman and the English BillyMonger of the Forza Racing Team. With CRG Holland the young Stan Pex, with M2 Racing Karts Team the Spanish Marta Garcia, with LH Racing the Finnish Niko Kari and the Belgian Matteo Raspatelli.

Also the presence of private teams with CRG is excellent in the tiniest category of the WSK Euro Series, the 60 Mini, for the first out of two rounds dedicated to this category - the second round is scheduled for 21st April in Sarno -. With the Gamoto Team Eliseo Martinez and Abdul Gafar Muizz, already great protagonists in the WSK Master, besides Nazim Azman. With the AB Motorsport Team  Bogdan Fetisov and Kostantinos, with Forza Racing Ronan Graves.

ON TV. Sunday 3rd March, from 11.20am, live streaming on the WSK website www.wskarting.it and the Stop&Go website www.stopandgo.tv with the images of the final phase. Pre-recorded boadcast of the event on Rai Sport2 Monday 4th March at 09.00pm. Friday 8th March on Rai Sport2 WSK TV Magazine.