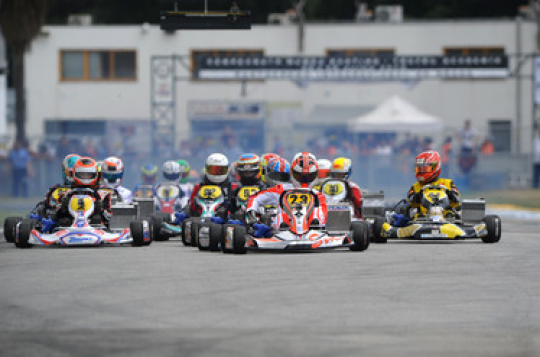 The CIK-FIA U18 World Championship and Academy Trophy got down to the nitty-gritty on Saturday with Qualifying Practice and the first Qualifying Heats on the Braga circuit. Henry Easthope made a strong impression in the U18 category (for those under 18 years of age) and George Russell is currently dominating competition for the Academy Trophy. But these two Britons know perfectly well that there is still a long way to go this weekend …

A surprise was in store for Saturday morning, as Qualifying Practice was about to start for the First Round of the U18 World Championship. Although sun and warmth are usually the order of the day in Portugal at this time of year, the weather is proving somewhat changeable this year, to the extent that rainfall during the night had soaked the Braga circuit. So it was on a track rather damp in places that the 71 Drivers in the U18 World Championship, divided into three Series, took to the wheel for Qualifying Practice. The fastest of them all, the Briton Henry Easthope (Sodi), was ahead of the Finns Ville Mäntylä (Energy) and Juho Valtanen (PCR), who posted the best times in the two other Series. In the overall classification, the Top 10 was completed by the Dane Martin Mortensen (FK), the Italian Marco Maestranzi (PCR), the Briton Sam Webster (ART GP), the Australian Joseph Mawson (Top Kart), the Spaniard German Villanueva (FK), the Frenchman Jules Gounon (Sodi) and the Brazilian Thiago Vivacqua (Zanardi). So 8 nationalities and 7 different makes of chassis were among the first 10!

Following this Qualifying Practice, 7 Qualifying Heats (out of a total of 10) were contested on Saturday. These gave Henry Easthope the chance to confirm his form today, as the British Driver, fifth in the Championship in 2011, had so far remained unbeaten. If he were to have a good result in his last Qualifying Heat, he would take pole position for the first Prefinal and the 25 points promised to the Driver leading the classification after the Heats. Among the other high-profile Drivers were the Dane Martin Mortensen, winner of two Heats, and also the Australian Joseph Mawson and the Finn Juho Valtanen, both of these two Drivers winning one Heat each. Although he did not fully assert himself, Jules Gounon was still in the leading bunch, like the Russian Georgy Antonov (MS Kart), only 26th after Qualifying Practice. Good runs were also made by Charles Leclerc (ART GP), in a distant 50th position against the clock and required to perform extremely well if he wanted to take his place among the 34 finalists.

Academy Trophy: Russell shines as expected
Considered by observers to be the man to beat in the CIK-FIA Academy Trophy, George Russell decided to prove them right. Just 1 thousandth of a second from the lead in Qualifying Practice, the United Kingdom representative then won his three Qualifying Heats to take pole position for the first Race. Fastest in Practice, the Polish Adrian Rozycki did well to take second place. Flying the female flag brilliantly, the French girl Adeline Prudent was impressive, taking 3rd place ahead of the Briton Alex Gil and the Finn Joonas Lappalainen. If he had not been penalised for a jump-start, the Belgian Amaury Bonduel would have been in the Top 3, but he ended up in 8th position, behind the Spaniard Javier Cobian and the Swiss Felix Hirsiger, but ahead of the Norwegian Martin Ellegard and the Dutchman Stan Pex. Although he was expected to be among the leaders, the Austrian Max Hofer was only in 15th place after being excluded in one Heat for a non-compliant clutch. Like his adversaries, he will be able to join the hunt for points in the two Races on the programme for the 28 finalists on Sunday.