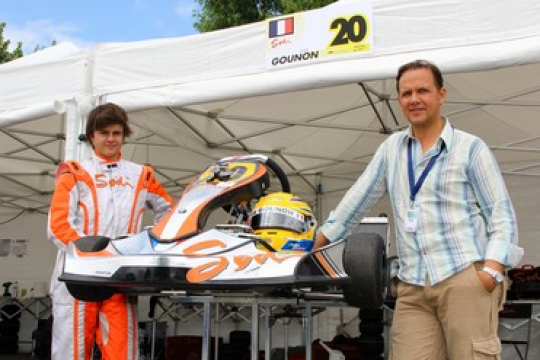 The 2012 editions of the CIK-FIA U18 World Championship and the Academy Trophy are launched officially. This Friday, in Braga, Drivers attended the briefing and then took part in the Edukart educational programme before discovering, or in some cases rediscovering, the Portuguese track.

The atmosphere is friendly but the pressure of racing is already there and everyone is preparing as well as they can for Qualifying Practice on Saturday morning.

The paddock, with its uniform arrangement of identical team tents, is already setting the tone: the U18 World Championship is different to other championships. Introduced in 2010, this world competition for under 18 year olds is in its third season this year, but still gives that breath of fresh air to international karting with its original concept: maximum cost reduction, the same chances of success for everyone and education for young Drivers.

In the Braga paddock, where this weekend the first of the three Rounds of the U18 World Championship is being fought, smiles are the order of the day … and restlessness prevails on Friday afternoon. Each driver is trying to find the best settings for Qualifying Practice and the Qualifying Heats scheduled for Saturday. In one tent, Jean-Marc Gounon is carefully analysing the timings. Former Formula 1 driver (9 Grand Prix in 1993 and 1994) and official representative of the Mercedes, BMW and Audi Endurance marks, the Frenchman is today following the career of his son Jules. “I never really wanted Jules to go karting,” recalls the man who finished second in the Le Mans 24 Hours in 1997. “But he was so insistent that I had to give in. And starting at the age of 15½ he of course had a certain disadvantage compared to many of his adversaries. But he is incredibly motivated and works very hard. He never lets go, he wants to learn about everything and to take his chance at any cost. I believe I must have been like that once … anyway when you aren’t well off it is the only way to be!”

With all his experience, Jean-Marc has a keen eye for the U18 World Championship which Jules first entered last year. “It really is a brilliant concept,” he explains. “Here it is not an arms race. Costs are considerably lower than for other categories. You have the same engine as your adversaries, and it is up to you to make the most of it. And then there are many great favourable aspects, like starting on Friday afternoon, which limits cost, and the second Prefinal for which the starting grid is reversed. At least that enables a Driver who is unlucky in the Qualifying Heats to make amends. In addition, a good driver is not only fast, but must also cope in the pack. All of this leads me to say that this Championship is not only a great school, but it also allows real talent to show itself!”

As is customary in this competition, Friday morning is reserved for the briefing given by the Race Director and the Edukart programme. After receiving the subject for study, Drivers are invited to answer multiple-choice questions relating to the regulations, combating drugs or the history of karting. The three Drivers who correctly answer all the questions in the fastest time are awarded podium positions (and cash prizes) on Sunday. For the U18 World Championship, these are the Italian Armando Iannaccone, Bahrain’s Ali Mohammed Al-Khalifa and the Briton Sam Webster. As for the younger competitors for the CIK-FIA Academy Trophy, the top scorers were Thomas Michael Bale, representing the United Arab Emirates, the Italian Enrico Pillon and the Russian Alexander Maslennikov.

In the afternoon, Non-Qualifying Practice confirmed what observers had expected: the contest will be extremely open in the U18 category, in which the Finn Ville Mäntylä (Energy) and the Briton Henry Easthope (Sodi) were fastest. But the Frenchman Anthoine Hubert (FK), the Briton Matthew Graham (Zanardi), the Monegasque Charles Leclerc (ART GP) and the Frenchman Jules Gounon (Sodi), to mention just a few, confirmed that they will also be in the reckoning. For the Academy Trophy, the Briton George Russell has already established himself as the man to beat, but the young Finn Joonas Lappalainen also showed his pace. In reality, many Drivers can dream of leading positions, from Qualifying Practice on Saturday morning … so there will be no lack of suspense for the opening competitions before the Championship moves on France (Angerville, 24-26 August) and Bahrain (Sakhir, 8-10 November).