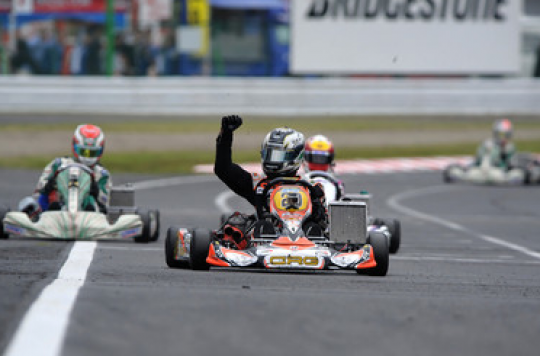 The battle for the World KF1 Championship began at the Suzuka circuit with plenty of thrills for karting fans. Although Flavio Camponeschi took control of the competition with three wins in four Races, the success of the four-times World Champion Davide Foré in the last round confirmed just how open the challenge is. With three trips to the podium, the Japanese driver Daiki Sasaki also made a strong impression at his home venue.

After the first day’s racing on Saturday, when Flavio Camponeschi won both Races, competitors in the World KF1 Championship set the clock back to zero for qualifying on Sunday morning.

The fastest time was recorded by the young Max Verstappen (14) who added a touch of originality by placing his Intrepid-TM machine in pole position for the qualifying heats, but with the Japanese driver Daiki Sasaki (Kosmic-Vortex), Karol Basz (Birel-BMB) from Poland and the Italians Felice Tiene (CRG-BMB) and Flavio Camponeschi (Tony Kart-Vortex), five drivers with five different chassis, all within 101 thousandths of a second.

The qualifying heats ran without any major incident and it was finally Felice Tiene who took pole position for Race 1 in front of Verstappen, Sasaki, Camponeschi and Basz.

The third Race of the World FK1 Championship was a treat for the spectators. Although there was a three-lap yellow-card procedure as the result of a collision at the start (costing the ambitions of Arnaud Kozlinski (PCR-TM), Dave Blom (FK-TM), Yannick de Brabander (FK-TM) and Philo Paz Patric Armand (Kosmic-Vortex), among others), the suspense was complete. Led by Max Verstappen, there was very quickly a break-away group of four drivers including Felice Tiene, Flavio Camponeschi and Daiki Sasaki. Despite all his efforts, Verstappen had to bow to the authority of an in-form Daiki Sasaki a little after the half-way mark. A few hundred metres further on the son of the former Formula 1 driver from the Netherlands also succumbed to attacks by Flavio Camponeschi and Felice Tiene.

First over the finishing line, the sky fell in for Daiki Sasaki when he received a three-second penalty for jumping the start. The Japanese driver suddenly found himself relegated to fourth position and Flavio Camponeschi took his third victory of the weekend. Felice Tiene and Max Verstappen joined the winner on the podium.

Following the thrilling first Race, the fourth and last confrontation of the day was even more exciting. The initial leader, Flavio Camponeschi left the track unaided and fell back to 14th place. In front of him, the battle for victory was between Felice Tiene and Max Verstappen, closely watched by Daiki Sasaki and Davide Foré. Leading earlier in the Race, the Dutchman tried to recover the lead at the start of the very last lap. Felice Tiene resisted however and the two collided… Hit by an out-of-control Max Verstappen, Daiki Sasaki found himself in the lead for a few hundred metres but with his chassis crumpled he was unable to fend off the final attack by Davide Foré. Four years after his last major international success, the KF1 World Cup also fought in Suzuka, the Italian four-times World Champion again tasted the winner’s champagne.

As happy as a newcomer to the podium, Davide was accompanied by Daiki Sasaki and… Flavio Camponeschi, who fought back incredibly after his misfortunes on the first lap. Karol Basz also fought back well, from 28th to 4th position, recording the fastest lap whilst doing so, after an engine failure in Race 3. The Polish driver took with him the Indonesian Philo Paz Patric Armand (only 29th on the grid but in the top 5 in this last joust). The top 10 also included Tom Joyner (LH-BMB), Carlos Gil (Tony Kart-Vortex) from Spain, the Finnish driver Markus Teemu Petjoi (Tony Kart-Vortex), Matthew Graham (Zanardi-Parilla) and Jordon Lennox Lamb (CRG-BMB).

In the championship, with three results of the four retained (as the Regulations provide), Flavio Camponeschi naturally leads the parade with three wins and therefore maximum points (75). Second on three occasions, Daiki Sasaki (60) logically occupies the same position in the Championship, ahead of Felice Tiene (49), Davide Foré (47) and Karol Basz (35). As a result of failing to finish the last Race, Max Verstappen (32) is back in 6th place. The top 10 is completed by Tom Joyner (28), Jordon Lennox Lamb (26), Philo Paz Patric Armand (19) and Matthew Graham (18).

After this exciting opening meeting in Suzuka, the Championship will be concluded in Macau, from 17 to 20 October. In the heat of battle, the contestants for the title will need to combine speed and skill to take the prize for which they are all fighting, that much coveted World Crown!