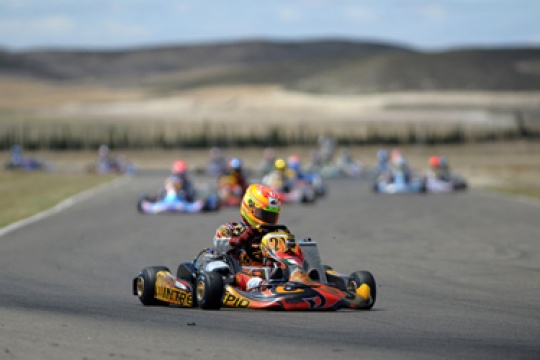 No fewer than 105 drivers of 23 different nationalities will confront one another at Varennes-sur-Allier this weekend for the first round of the KF3 European Championship. The battle between these Juniors, aged 13 to 15, promises to be thrilling!

Initially, the event at Varennes-sur-Allier which will mark the start of the CIK-FIA karting season (Superkart began at Hockenheim last week) this weekend in France should have been both the opening round of the KF1 World Championship and the first of the two rounds of the KF3 European Championship. Unfortunately, a lack of entries, together with the withdrawal of several manufacturers at the last minute, obliged the CIK-FIA to cancel the European events of the world championship for the leading category, thus limiting this meeting at Varennes-sur-Allier to the Juniors category only. Which does not mean that this meeting will be uninteresting, quite the contrary!

On the Jean Brun circuit, the best Juniors aged between 13 and 15 will do battle for the first race in a redesigned European Championship. In recent years, the European title in KF3 has been run over a single meeting, the crown going to the winner of the Final. A formula that favoured suspense, but which in sporting terms could sometimes be cruel. Indeed, it is not rare to have seen a driver dominate the field for a whole weekend and then lose everything in the Final due to a racing incident or following a mechanical problem…

Starting with this 2012 season, the system will change. As is the case for KF2, the Hopefuls category, the KF3 European Championship becomes a competition in two stages offering four possibilities for scoring points and, at the end, counting three results. After this opening round in Auvergne, it is in Great Britain, on the PF International circuit in Brandon, that the KF3 European Champion will be crowned. But before that fateful date of 22 July, all the favourites must already make their mark in France.

With 105 drivers entered, coming from 23 different countries, the fight will be fierce on the fast Jean Brun circuit. To score points, they first have to be among the 34 finalists invited to take part in the two Races scheduled for the Sunday afternoon. Throughout the weekend, they will have to combine speed and strategy on a track that favours the phenomenon of slipstreaming, and thus very closely bunched racing where everything is decided in the very last lap.

It is hard to make a forecast by analysing the entry list, even if there are obviously a few favourites who stand out. The British racer George Russel (Intrepid-TM) will stake his title with the firm intention of keeping his crown. But the list of outsiders is as long as your arm. The French will be there in force to impress their home crowd. Dorian Boccolacci (Intrepid-TM) is among the best of them, along with Paolo Besancenez (Sodi-Parilla), Valentin Naud (Formula K-TM), François Bécamel (Kosmic-Parilla), Gabriel Aubry (Birel-TM), Arthur Lehouck (Sodi-Parilla) and Thomas Landais (Sodi-Parilla), not to mention the former Junior Champion of France, Jérémy Demarque (Sodi-Parilla).

In wet conditions, as announced for this last weekend in April at Varennes-sur-Allier, the British drivers should feel right at home. Besides George Russel, there are many others aiming for the two victories at stake before the second meeting, which for them will take place at home. Names that spring to mind are Callum Ilott and Dan Ticktum (both in Zanardi-Parilla) and Connor Jupp (Energy-Vortex).

The countries of southern Europe should not be outdone either. Along with the Spaniards Alex Palou (CRG-BMB), Guillermo Russo (FA Kart-Vortex) and Albert Gil (Tony Kart-Vortex), we shall also see the Italians, led by Alessio Piccini (Kosmic-Vortex), the son of the former World Champion in karts with gearboxes.

But what is so special about karting is that it can also allow small countries to excel on the international scene. Finland, Belgium, Croatia, to mention just a few, have just as much of a chance to shine as Russia. And we must not forget the Canadian Lance Stroll (Zanardi-Parilla) and the American Dalton Sargeant (Tony Kart-Vortex), determined to make a name for themselves in Europe!

Unless… unless a newcomer, ignored by the bookmakers, reveals his talent to the world, treading in the footsteps of a certain Sebastian Vettel, Junior European Champion in 2001 in a competition that also comprised two meetings. And that is something that cannot fail to inspire the 105 candidates for this prestigious title of European Champion!