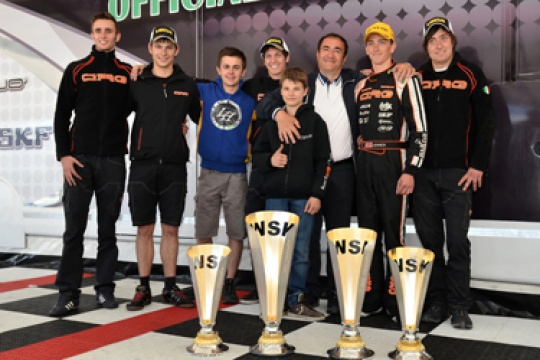 For CRG and Maxter, the 2012 WSK Master Series 2012 finished as it had started, with a victory! But not only that: Jordon Lennox-Lamb was crowned KZ2 champion, Fabian Federer and Jorrit Pex claimed the two first places in the two KZ1 finals, while Felice Tiene took another KF2 podium.

On the technically challenging 7 Lake circuit at Castelletto di Branduzzo, the Italian make lived up to the expectations of its drivers.
KZ1: Pex-Federer Feat
Motivated by his victory last week at the Andrea Margutti Trophy (Lonato), Fabian Federer repeated his prowess at a higher level in KZ1. "The level is incredibly high in this category and winning Saturday's Final 1 was a great satisfaction to me. I would like to pay tribute to the team, which prepared a top-performing CRG-Maxter kart for me. I also set the fastest lap time during the race and I won my two heats", the Italian driver commented.
Jorrit Pex's weekend (TM-CRG Holland) was also excellent. First, the Dutch driver took his third pole in three races! Second on Saturday behind Federer, Pex shifted to higher gear on Sunday and climbed onto the top step of the podium. Federer secured the second double success in a row for CRG. A perfect score!

KZ2: A Deserved Title
Jordon Lennox-Lamb knew he could afford no mistakes if he wanted to win the WSK Master Series. The Briton was the fastest on Saturday during timed qualifying and in the final, where he conquered an excellent second place. On Sunday, a fastest lap time came again to reward his performance, which led him to the third step of the podium. This result was largely enough to allow him to conquer the title in this very hard fought series. "Winning in KZ with a kart coming straight from the factory is a major recognition", Jordon confessed.

KF: Three Top 10s, One Podium
The CRG-BMB/KVS karts were back again on the centre stage in both KF2 and KF3. The weekend of the "Juniors" was marked by the progression of the Canadian driver Zachary Claman De Melo. After qualifying within the same hundredth of a second as his team mate Alex Palou, he managed to carve his way up to reach the front runners after some difficult heats. Considering that at that point he was only 41st, it can rightly be said that his recovery up to 9th was really a remarkable performance. The Spaniard Palou finished two places behind. But after his third place achieved in the semi-final he would have deserved a better result.