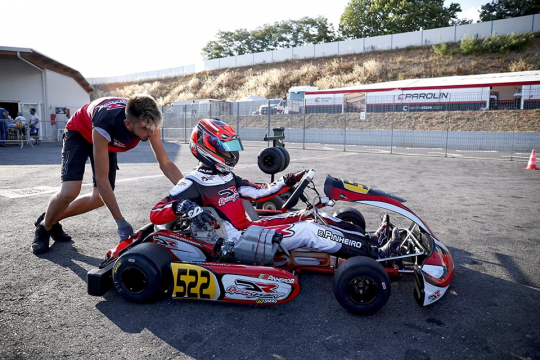 Author: Vroomkart International
Having decided on the OK-N engine’s admission to the national market starting next year, shall ACI Sport be able to guarantee its success by addressing the (alas) recurrent solutions of the past?
As you may have already known on the occasion of the third round of the European Championship in Franciacorta, with titles won by Kean Nakamura-Berta (KR/Iame) in OK and Anatholy Khavalkin (Parolin/Tm) in OKJ, a first test on the track with the OK-N engine was organized, as Vroom has amply written about in the last two months; its aim, to restore substance to the national supply chain.

From the meeting between ACI Sport and the engine manufacturers in Franciacorta, the parameters that are important to make this promising initiative work better still, however, remain in doubt. The crucial point is the modification to be adopted to use the same engine for the two categories involved: the Senior and the Junior.

The OK-N Senior, as already mentioned, has undergone a reduction in performance with a control unit limited to 15,000 rpm (against 16,000 of the OK), the weight brought to 155 kg (including the driver), and the combustion chamber volume to 10 cc, while for the carburetor it should be the Ø 24 diaphragm model. The limitation to 15,000 rpm is a valid solution, but also a dangerous double-edged sword as the usual “wise guys” could use the ECU of the international OK to steal 1,000 rpm, a sad spectacle we also witnessed at the world finals level, with a driver who, despite using a pinion with one less tooth, did not lose too much on the long straight to the finish line! The external color is not enough, as these same wise guys handle and mishandle ECUs with great skill. Just re-mix the control units before the start to solve the problem definitively. The 155 kg of weight is instead a stupid solution because, in addition to a safety problem, they generate a greater consumption of tires and brakes and negatively affect the duration of the frame (today, as we know, some manufacturers supply frames that last 1 or 2 races before becoming unnerved or cracked). A light kart is a safer kart, always and in any case. A higher combustion chamber volume reduces the compression ratio, decreasing performance and reducing the engine’s mechanical stress, so it is a sensible intervention, like the adoption of the diaphragm carburetor. To say it all, the float carburetor in all categories, including the 60, should disappear from single-speed karting. In addition to a very low-quality level, speaking of these carburetors, it is unacceptable that you have to wait for the "Magician" on duty to get the right carburetion and at a high price! The driver must manage the carburetion with the 2 screws to be ready for international races and to be able to manage more variables in the economy of a competition (look at the steering wheel of an F1 and tell me if it is too difficult to manage the carburetion, which they have done for decades, people of the caliber of Senna, Schumacher (father), Prost and company. The float chamber carburetors leave them to KZ!

For Junior, on the other hand, the issue is more delicate ... Various solutions have been proposed for undercutting or decreasing power, starting from the reduction of the section of the exhaust manifold, to the number of revs of the control unit and so on. From the tests carried out, the best solution is that of the exhaust manifold: cheap, easy to replace with a view to changing category, and easy to check, verify. A control unit with an even lower rotation speed would create further possibilities for intervention and should not be taken into consideration, as would a smaller carburetor, which on the latest generation reed motors, unless drastic Venturi reduction, would not lead to any benefit, if not to make the change of category more expensive. With the correctly throttled manifold, all problems are solved brilliantly, as demonstrated in the tests, at a sustainable cost.

Now the hot potato will pass into the hands of the federal president Raffaele Giammaria, who will have to decide which solutions to adopt to avoid future problems to the detriment of the success of the single-speed "supply chain" or feeder system.

This national project will make sense when the teams and practitioners will have a single engine to use from the OK Junior to the OK Senior, adopting very few changes in a 5-year path ... A solution already adopted by branded trophies (see Rotax Max and Iame X30) and therefore a model metabolized by kart drivers who have already experienced this type of path from Cadets to Senior.

Speaking of the single-brand trophies, our hope is that OK Junior and Senior will become the only two single-speed categories titled for the Italian championship, reducing the national finals of the single-make brands to mere end-of-season trophies! Reading here and there "world champion" or "Italian champion" when talking about a single-brand trophy is unacceptable and unfair in relation to true champions.

The aspect of costs to be controlled remains another important crux of the matter, but thanks to the questionable regulations of the past, today it should be easier to avoid certain unfortunate intuitions, precisely because we have already been there and have paid the consequences at the national level.

For OK we hope a choice based on the best quality/price ratio of the tires, today in the dock because of the absurd prices at which they are sold compared to the poor quality demonstrated in the field, with real embarrassments at the international level.

From the first tests that took place on Thursday at the weekend of the European Championship in Franciacorta, the OK-N with different engine and carburetor solutions run in a range of 49"/ 50", while the Junior (with only the exhaust choke) scored times of about 1 second higher: a noteworthy result. Comparing these chronometric results with the standard OK engine used in FIA Karting, the gap around the second that should be recorded is considered acceptable: that is to say, the accounts add up!

Today our National Sports Association has the task of presenting the best regulatory compromise for the OK-N, which then seems it shall be taken up by all the national federations with the approval of the FIA. Thus, as was the case a long time ago, the Italy structure has the opportunity to re-conquer the international scene, as it is logical that it is with a container so rich in key players and protagonists. The Made in Italy is a sector that can manage professional and amateur karting at will, which is why it is essential to have a Federation with an authoritative guide who knows how to indicate the right path for the good of this sport and all its key players, starting with the kart drivers, of course. We just have to wait for further news on this and hope that obvious negligence will not take over and that will end up jamming the mechanism even before it starts. Fingers crossed.

How would you like it to be? Do you agree with their proposals?

PARTECIPATE IN OUR SURVEY