Author: Vroomkart International
After a well-deserved summer break, we’re back at the racetrack. Marco Ardigò is KF1 European Champion shortly after taking the WSK KZ2 title. But Flavio Camponeschi is the revelation of the month! At the European KF2 Championship he grabs it all, dominating the category now more than ever under Vortex supremacy. 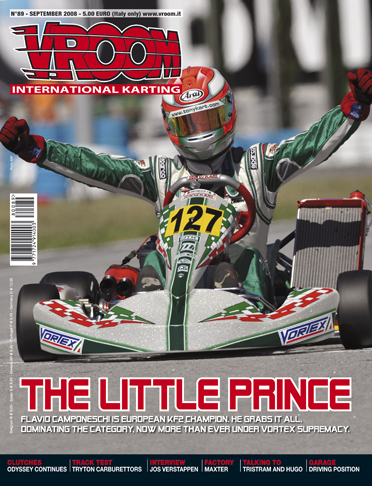 In the end your sins will find you out. And when they are consequences of wrong decisions (if not bad faith), they hit you quite hard. We’re talking about the special clutches mounted for international races, but however by now, we can’t pretend that it doesn’t boil down to one thing: the new 125 KF engines that have taken over from the old well-known 100cc.
It’s now a case of absolute chaos in international races, the same International Federation doesn’t really knowing if it will be able to guarantee technical- sports discipline for the World Championship. Where as from now we can say that we won’t know who the winner is for sure, until half an hour after the race, that is, when (and if) the technical control is over and done with. This however, shouldn’t be allowed, in a sports environment. Anyway, let’s take one this at a time. Do you remember why centrifugal clutches were introduced in karting? Because – they said – that if they were mounted, drivers could re-start after going into a spin, so their race wouldn’t be ruined by a mistake. Apart from the fact that anyone could see from the start that this might have been a good idea for beginner classes (60cc and 100 Junior), where drivers wouldn’t have been able to re-start by themselves, but it wouldn’t be the same for higher classes. When a driver fights against his rivals in titled races, if he goes into a spin, he’s ruined his chances anyway, despite being able to get back into the race. Not only, being able to re-start together with the excitement of the race makes him risk getting back into the race while others are coming along, risking being hit, and therefore also ruin his rival’s chances of winning too. Great! And don’t tell us that the difficulty encountered by Ardigò, Forè and company was due to the fact that they weren’t able to re-start, when they raced with the 100cc…. In the field of amateur-single-brand karting, though, the advantage is being able to move the kart just by pushing it, no need to have anyone else to help you start: but these aren’t problems for drivers who race in Cik events who have mechanics on the spot to help them sort out any problem they may have. So, how are things going? They are adopting a series of measures that end up having a boomerang effect to stop people tampering of cheating when they mount “special” clutches. And just think, it would have been enough to know more about scooter races, where centrifugal clutch skid is important to maintain engine coupling and understand from the start what the technical evolution in this field would be. Don’t think that the people who put down the technical regulations actually know anything about racing engines, now let’s see what’s happening. They are now talking about checking clutches when the race is over, and perhaps bring clutch regulations for “coupling” point down from 5000 to 3000 revs. Apart from the fact that at3000 revs there’s the risk that the engine may not be able to start and you run more risk (already high in KF classes) to stall the engine, the ridiculous thing is control after the race. Clutches are, in fact, elements that wear out, so you can’t exactly foresee how they react after about thirty laps raced at high revs. Besides the fact that after a race you might be disqualified because brake pads are too worn out (these wear out too…), you must remember an important thing: already now with the normal clutches, which are bought together with the engine, if you go into a spin it’s easy to “burn them” when you re-start; two spins and you won’t be able to finish the race. Anyway, at this point the clutch engages well when above 5000 and that’s your disqualification for sure. Can you hear a bell ringing in your head? Sure! Summing up things, from start to finish: clutches were introduced  (compulsory) with the excuse that they would enable drivers to restart after going into a spin. Secondly: should you spin, at the moment, you get disqualified when the race is over, and the risk is very high even if you personally don’t make any driving errors. Friends, the circle is closed! The incongruence is evident: clutches only create another difficulty and are really of no help to those who mount them, but only problems. However, the same can be said for the electric start, all the wires that you find on KF engines, plus balancing countershafts and so on. Well, KF engines are a big bluff. It’s far too easy to miss the 100cc, the same engines that never give any clutch problem, simply because, they didn’t have one! Some say that this sort of nostalgic feeling doesn’t take you anywhere. Maybe they’re right. But then, don’t forget that nostalgic feelings determine that before things used to work but now they don’t. Aware that we have reached a point of no return, with KF engines (and we’ve only looked into one of the many existing problems), this could be the first step towards resolving the actual situation. Some say that these engines we have and these we keep. Ok, fair enough, but there are ways and ways to go about things. Pursuing the same route with our heads down, as though nothing is happening, or as though everything is fine, is an attitude that could in the end take us to a “cul de sac” as far as these new engines are concerned. The first thing that manufacturers should do is hold a meeting to discuss the situation and find a solution that suits all concerned, avoiding the possibility (or abandoning the idea, for those who have any intentions) of cheating, and look beyond special “personal” interests. Will they be able to do so? 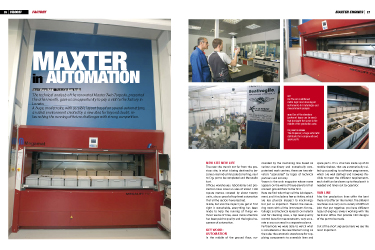 FACTORY - Maxter   The technical analysis of the renovated Maxter Twin Torpedo, presented the other month, gave us an opportunity to pay a visit to the factory in Lonato.
A huge, modern site, with sensible layout based on several automatisms, an ideal environment created by a new idea for beyond doubt, re-launching the running of future challenges with strong competition. 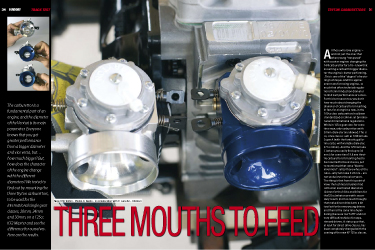 TRACK TEST – Tryton carburettors   The carburettor is a fundamental part of an engine, and the diameter of the Venturi is its main parameter. Everyone knows that you get greater performance from a bigger diameter and vice versa, but… how much bigger? But, how does the character of the engine change with the different diameters? We tested to find out by mounting the three Tryton carburettors, to be used for the international single gear classes, 20mm, 24mm and 30mm, on a 125cc KF2 Maxter and see the difference for ourselves.
Here are the results. 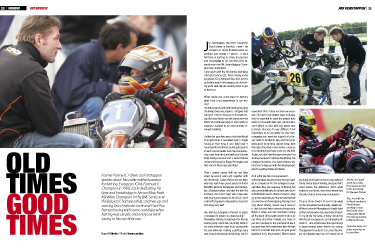 INTERVIEW – Jos Verstappen   Former Formula 1 driver Jos Verstappen speaks about his undiminished passion for karting. European ICA & Formula K Champion in 1989, Jos is dedicating his time and knowledge to his son Max, fresh MiniMax Champion in the BNL Series and the Belgian Championship, and two up and coming Dutch talents: Jorrit and Yard Pex. Remembering with some nostalgia when karting was simple, and everyone went racing in his own little van. 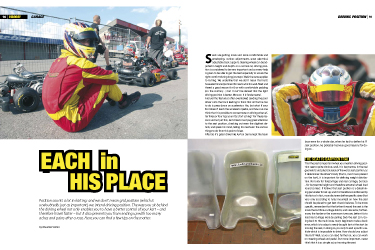 GARAGE – Driving position   Position counts a lot in karting: and we don’t mean grid position (which is undoubtedly just as important), we intend driving position. The way you sit behind the driving wheel not only enables you to have a better control of your kart – and therefore travel faster – but it also prevents you from ending up with too many aches and pains after a race. Here you can find a few tips on the matter. 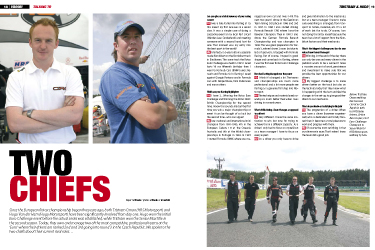 TALKING TO – Tristram & Hugo   Since the European Rotax championship began five years ago, both Tristram Oman (HRS Motorsport) and Hugo Van der Ham (Hugo Motorsport) have been significantly involved from day one. Hugo won the initial Euro Challenge event before the actual series was established, while Tristram won the Senior Max title in the second season. Today, they own and manage two of the most competitive, professional teams at the ‘Euro’ where their drivers are ranked 2nd and 3rd going into round 3 in the Czech Republic. We spoke to the two chiefs about their current rival roles… 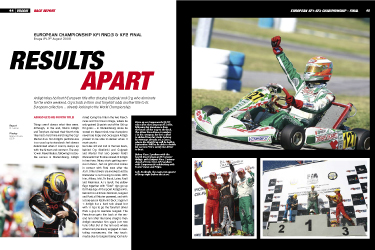 RACE REPORT – European Championship KF1 Rnd.3 & KF2 Final   Ardigò takes his fourth European title after chasing Kozlinski and Crg, who dominate for the entire weekend. Crg is back in form and TonyKart adds another title to its European collection… already looking to the World Championship. 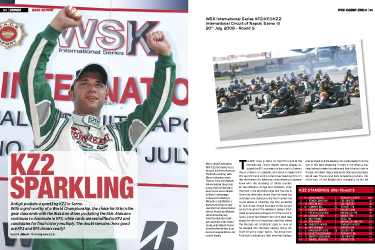 RACE REPORT – WSK rnd.5   Ardigò pockets a sparkling KZ2 in Sarno.
With a grid worthy of a World Championship, the chase for title in the gear class ends with the Brescian driver pocketing the title. Maisano continues to dominate in KF3, while cards are reshuffled in KF2 and candidates for final victory multiply. 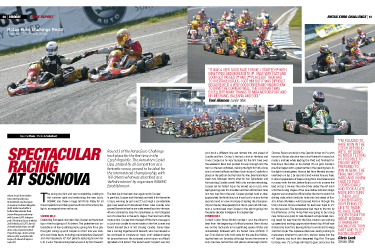 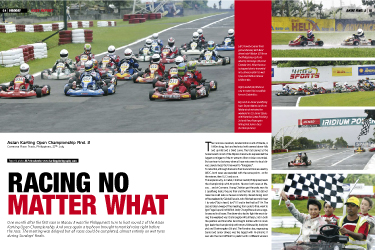 Also, the Rotax Euro Challenge stops in Czech Republic for round 3 on the spectacular Sosnova circuit, and the Carmona Race Track in the Philippines hosts AKOC rnd.2 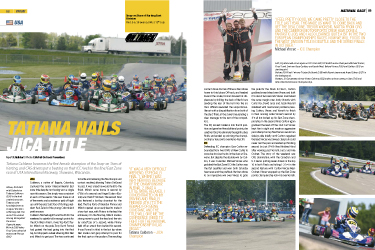 NATIONAL RACES   Stars of Karting in the USA crowns Tatiana Calderon, first female champion ever of the series, in JICA. In England, the Rotax Super One series gets a top performance by Paul Granger. 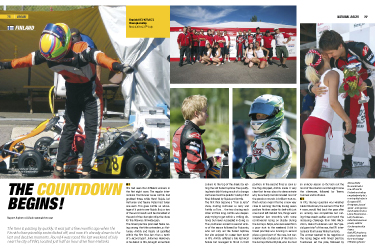 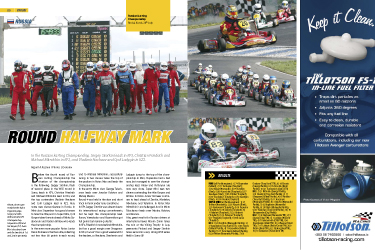 In Finland Rask gets another double for Spirit in Finnish KZ2 Champs rnd.4; while Russia and Czech Republic are through halfway mark in the national championship. From East Asia, Sasaki gets a brilliant double in Japan’s KF1 Championship, and Bira hosts Superkart Thailand Championship Round 4.


COLUMNS – Mondokart, October national racing calendars   The News section opens with the never-ending clutch issue. Following CIK communication right before the European Championship in Braga, and some controversial decisions during the racing weekend, we spoke to CIK Executive Secretary Vincent Caro to understand CIK position. Plus, Unipro releases the Acceleration Sensor, aka G-force sensor. Also, October national racing calendars, with over 30 dates from 16 countries around the world.


CARTOON – Why wear a helmet   Tardybraker’s late braking gets him in trouble again… good job Tense, his mechanic, tells him to put his helmet back on, just on time!