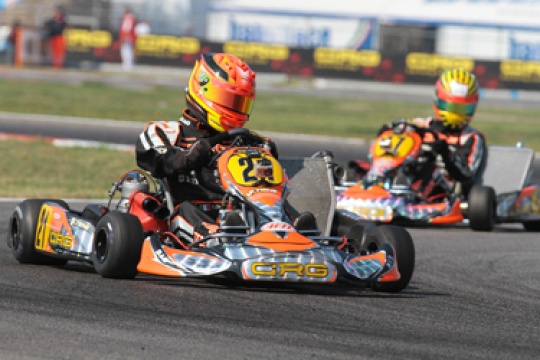 THE WEEKEND OF THE WORLD CHAMPIONSHIP IN SARNO COMPROMISED BY TIENE'S DISQUALIFICATION: HE HAD CONQUERED A WELL DESERVED SECOND PLACE IN FINAL 3. THE KF3 WORLD CUP SLIPPED OFF VERSTAPPEN'S HANDS BECAUSE OF AN OFF-­‐TRACK EXCURSION IN THE FINAL. JOYNER CRASHES IN KF2.

In the picture Tiene preceding Lennox

Sarno (Salerno -­ Italy). The fourth round of the CIK-­FIA Championship which took place in Sarno, together with the two KF2 and KF3 world cups, will be remembered in CRG for the good results achieved on the track and for the competitiveness shown by the chassis of the Italian manufacturer in every moment of the race: from the fast laps recorded during the time trials and the race to Verstappen’s several wins in the qualifying heats of the KF3, without forgetting the outstanding performances of CRG drivers in KF1 thanks to the more and more evolved Maxter engines.
A weekend which had begun very well and that could end even better. On the contrary, this time things did not go as expected and the CRG official team is greatly disappointed. Felice Tiene, the local ‘idol’, was disqualified. A decision which raised more than a doubt and which snatched the cup out of Tiene’s hands; a cup he deserved for his second place in the first of the two finals of the KF1 world championship on Sunday. Moreover, Verstappen could not tackle Leclerc’s overtaking attempt for a problem in his engine when the CRG driver was second and fighting for the win of the KF3 world cup. These are rather disappointing situations and Tiene’s disqualification has prolonged the ‘shadow’ which has been cast on the team since the outrageous disqualification of Andrea Dalè for the notorious case of the irregular fuel in the world championship in Germany. 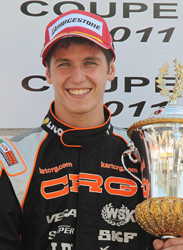 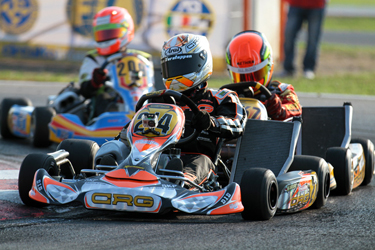 Left, Tiene on the KF1 championship podium before his disqualification. Right, Verstappen in the KF3 world cup final just before his off-­‐track excursion.

IN KF1, TIENE OBLIGED TO STEP DOWN THE PODIUM. In KF1, the disqualification of Felice Tiene spoilt the weekend of Sarno after the rejoicing for his terrific second place in the final 3 of the world championship. A second place enhanced by the fastest lap of the race and built up little by little, thanks to an outstanding performance and to a great recovery from the seventh place. The driver from Naples was disqualified after the race for an alleged clutch sliding during the first of the fifteen laps in schedule: the disqualification, of course, jeopardized Tiene’s last final of the weekend. The other two CRG-­Maxter drivers Jordon Lennox-­Lamb and Laura Tillett got involved in an accident in the initial phases of the race. This is how the 2011 world championship ends for CRG; still, there is the awareness of the great performing qualities of the equipment produced by the Italian manufacturer, both with the CRG chassis and with the new competitiveness progress made with the Maxter engines.

VERSTAPPEN OFF-­TRACK IN KF3. After being one of the major protagonists of the KF3 world cup since the time trials and throughout all the qualifying heats thanks to his five wins and a second place, Max Verstappen in the final did not manage to get what he deserved. In the final, the CRG driver had some troubles after starting on the outside front row. Verstappen was third after the first bend, but he was soon very close to the leading drivers. While second and ready to attack the leader, he was obliged to go off-­‐ track when Leclerc, at the fourth lap, drew up alongside him in the inner part of the fast hairpin bend before the fast bend which leads to the finishing line: it was right then that the Dutch driver’s engine did not respond as it was supposed to do for an electrical failure. It is a shame that for the nth time Verstappen has to renounce to conquer a CIK-­‐FIA title for no fault of his. 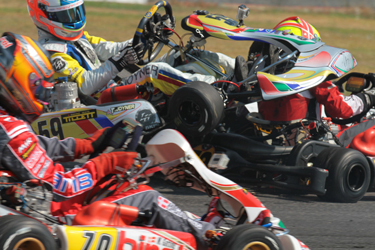 JOYNER CRASHES IN KF2. In the KF2 world cup Tom Joyner (in the picture), eventually, did not get the result he deserved. The young and fast CRG English driver, who raced on a LH chassis, abandoned all hopes for a win after a crash at the first bend of the pre-­‐final (picture above). Also his teammate, the Portuguese David Da Luz -­ the winner of the KF2 world cup in 2009 -­, was rather unlucky; he did not manage to qualify for the final because a series of troubles in the qualifying heats.

The Kick-Off gets the Green Light to go racing!