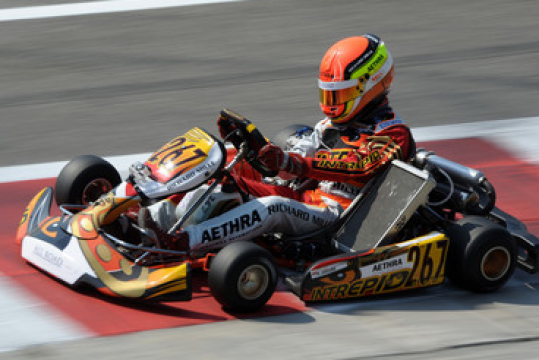 Sunshine everywhere, temperatures of over 30°C… The participants in the CIK-FIA World Cups for KF2 and KF3 held this weekend at Sarno have not been surprised by the conditions prevailing during the first powerful moments of the meeting on this Friday morning, namely timed practice.


It was however all about surprises in the hierarchy of KF2! After the different qualifying sessions Alessio Guazzaroni (on astonishing Tony Kart-BMB equipment) indeed proved fastest. The 19 year-old Italian accomplished a real feat. “I did not expect at all to get pole here”, he said in a smile. “We are in a small family team with limited means. For example, we sleep in our lorry and have just one chassis – and even then, it has been lent to me! I don’t know how I managed to achieve pole-position but I did it, and I am on top of the world! But the weekend is only just beginning…”

Even though this is a beautiful story, the Italian is right to put matters in perspective as the 94 competitors, separated into 6 groups, will now get down to running in their qualifying heats, and only the top 34 will be eligible for the Final. Behind Guazzaroni, the other leading Drivers further to qualifying practice are Thailand’s Tanart Sathienthirakul (Tony Kart-TM), who thus confirms the form he showed in the European Championship, the Frenchman John Filippi (Exprit-Vortex), the Italians Loris Spinelli (Tony Kart-Vortex) and Antonio Maria Giovinazzi (PCR-Parilla), the Brit Sam Macleod (FA Kart-Vortex), the Dane Christian Sorensen (Tony Kart-Vortex), the Italian Paolo Ippolito (Tony Kart-Vortex), Britain’s Sam Snell (Energy-TM) and Italy’s Giuliano Niceta (Intrepid-TM), who won the World Cup for KF3 2 years ago on this very track. As a token of the intensity of debates, 70 Drivers were within the same second… and some favourites – like the European Champion Sami Luka (Energy-TM), 46th in the classification – must already start what is likely to be a long chase as a result of a poor qualifying session.

Five KF3 Junior (13-15 years old) Drivers ended their own qualifying session within the same tenth of a second. But it was Charles Leclerc (Intrepid-TM) who had the last word. “It was all functioning fine and I concentrated well”, explained the Monaco competitor. “Up until now, I had never been lucky on the circuit of Sarno but it is apparently different this year.” Second in practice, the Dutchman Max Verstappen (CRG-Parilla) has confirmed that one would have to count on him since he finished ahead of the Italian Alessio Lorandi (Tony Kart-Vortex), Denmark’s Nicolai Sylvest (Tony Kart-Vortex), the European Champion George Russel (Intrepid-TM), the Italian Speedy (alias Antonio Fuoco, Tony Kart-Vortex), Britain’s Matthew Graham (Zanardi-Parilla) and Harrison Scott (Intrepid-TM), France’s Dorian Boccolacci (Birel-BMB) and the Briton Callan O’Keeffe (FA Kart-Vortex). For them and for all these KF3 Drivers (102 in total!), the long list of qualifying heats begins this Friday afternoon and will end on Sunday morning. For them also, only 34 places will be available in the Final. It all promises to be quite hot at the foot of the Vesuvius!

It is worth noting that, in accordance with the new World Championship format, KF1 Drivers will compete in two identical racing days on Saturday and Sunday, with qualifying practice in the morning and two races in the afternoon. Thursday and Friday are however used for free practice and everyone prepares for battle prior to the first timed session, to be held on Saturday at 10h55.

RGMMC, Champions Of The Future - Antonelli and Kutsov on top in Spain