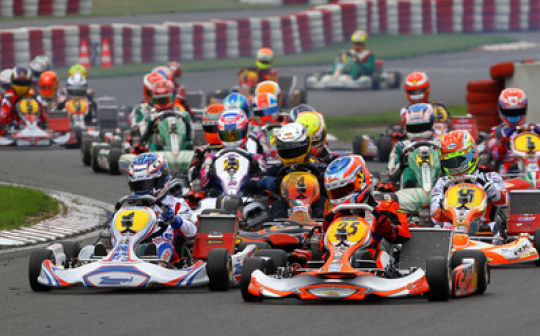 Two weeks after the gearbox KZ karts’ main event was held in Belgium, it will be the turn of KFs to reach the highlight of their season, with the CIK-FIA World Cups for KF2 and KF3.


Not forgetting KF1s, for which it will be the fourth of their five-round 2011 World Championship. It is on the 1,700 metres of the Circuito Internazionale of Sarno-Napoli (ITA) that everybody who is anybody in KF will gather on 16, 17 and 18 September for a meeting which will almost look like a marathon: with entry lists of over one hundred competitors, both in KF2 (102 entries) and in KF3 (119 Juniors), in addition to the big names of KF1, the official programme extends over three competition days busy with 33 (!) qualifying heats and 10 final phase races.

In KF1, the two current great hopes of international Karting who are the Dutchman Nyck de Vries and the Briton Alexander Albon will continue their duel. Even though one result achieved by de Vries is still submitted to an appeal to be judged at the end of October, the provisional classification of the championship makes one think that the title fight will be focused on these two young Drivers, who until now have ideally been both regular and fast. With the question mark hanging over the International Court of Appeal’s verdict until 27 October, which may deprive de Vries of one of his Genk victories, there will not be any room for a wait-and-see or strategic restraint race at Sarno, and it will make the show all the more intense!

In KF2, a great many Drivers will have their eyes on the World Cup. The list of potential winners amongst the 102 entries is as large as the number of competitors (34) who will be eligible for the Sunday final. The Belgian Sami Luka is keen on achieving a tremendous double after landing the European Championship of the category in July, whereas the Thai Tanart Sathientirakul is determined to overcome in Sarno his disappointment of having lost this European title because of a penalty for overspeeding during the start procedure. Among the favourites it is worth noting in particular the Brit Tom Joyner, Finland’s Pyry Ovaska and Niklas Tiihonen, France’s Enzo Guibbert and Victor Sendin, the Italian Antonio Maria Giovinazzi, the Spaniard Carlos Gil and a whole Danish delegation particularly fearsome on paper, with Nikolaj Moller Madsen, Michelle Gatting, Jacob Nortoft, Andreas Hansen or Max Klinkby-Silver.

In KF3, the succession of Alexander Albon, who claimed this World Cup for Juniors in 2010 in Portugal, will not be less open. The likes of Russell, Hansson, Jupp, Barnicoat, Scott, Boccolacci, Leclerc, Verstappen, Ocon, Graham, Olsen, O’keefe, Helgheim or Piccini are indeed tipped but many of the other 106 entries can create a surprise if they are in ideal form… a bit like Antonio Maria Niceta’s performance in 2008 on the same Sarno track in the maiden edition of the World Cup for KF3.

From Friday 16 September at 10 hours, you can follow qualifying practice of KF2 and KF3 live on www.cikfia.com. The schedule of the event is so busy that an initial wave of 12 qualifying heats will already take place on Friday afternoon! The Sunday finals will get live television coverage on the Sport Italia channel.