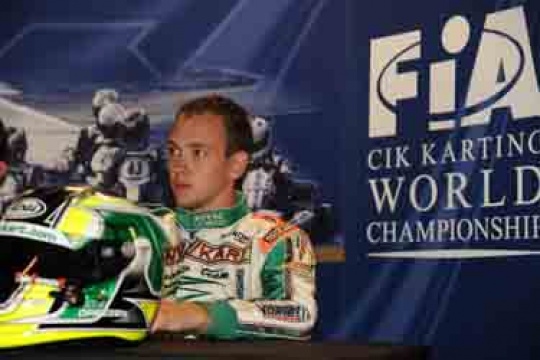 On the occasion of the rendez-vous of the KF1 category in Genk, we were winners in the first race on Saturday and got a podium on Sunday. By this result, our driver Flavio Camponeschi has now upgraded to the third position in the Championship’s classification. After a very good beginning on the dry track, we unfortunately missed the World Cup in KZ1 category, also because of weather conditions which made our technical decisions changing during the pre-final.

KF1 – The first day of competitions (Saturday 3rd) opens on the Belgian circuit with a final pole and another good success of Camponeschi. Our driver sprang from the pole also thanks to the perfect chassis, becoming unreachable thanks to the big gap between him and other drivers, after a few rounds. The success has been soon also enriched by a best lap obtained with a timing of 53.016.
In the second race, the final has not been so lucky for our colours. Camponeschi drove as leader over the whole race and in the last round he needed to fight against an attack from a rival (De Vries) which he fairly faced. Unfortunately, this made Camponeschi go off the track, losing the podium.
Our drivers Kanamaru, D’Agosto and Camponeschi confirmed to be the protagonists also is the Sunday races, showing off the high competitiveness of both Racer EVRR and all technical material. Our Japanese driver fought for the podium during the first final on Sunday but was then put out of the race due to a slight collision occurred in the last rounds.
Camponeschi still confirmed his top performances by gaining the second podium during the weekend, and a third position in the race-2 of Sunday.
The general classification (upon sub-judice’s decision ) sees then our drivers Camponeschi (129 points) and D’Agosto (113), third and fourth positions respectively, before the last appointments of this World Championship in Sarno (Sept. 14th – 15th , Italy) and Suzuka (Nov. 12th – 13th , Japan).


KZ1 – Despite the unlucky ending of the World Cup, our Racer EVRR chassis powered by Vortex engines, still give prove of the protagonists’ role they played, with Dreezen and Ardigò gaining the third and seventh positions, with a success that put them between the very first places. The heavy rain during the morning, fell right before the pre-final in KZ1 category, shifted our ground. During the pre-final Dreezen and Catt, coming from the fifth position too, were both eliminated from rivals which behaved quite threatening.
The fast and unforeseeable asphalt settings, due to the changing weather, got their last contribution to make the technical situation unmanageable, which in different conditions would have still confirmed its prime role.
Timetable and classification are available at the following link: http://www.cikfia.com/championships/cik-calendar/genk/event-guiausatide.html

Giacomo Aliprandi – Team Manager of Tony Kart Racing Team “In KF1 category we have always been competitive, with both of our three drivers and not only. Apart from the accident occurred to Flavio (Camponeschi), we raced in the first positions  and close to the leader in the classification.
In KZ1 category, dry track technical settings changed on Sunday morning as a consequence of the heavy rain. This matter together with a few collisions prevent our drivers’ chances to succeed..”