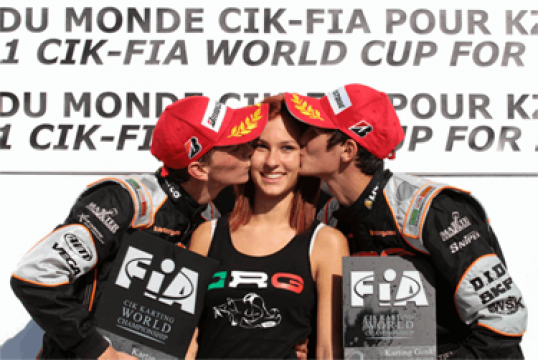 EXCELLENT THE COMPETIVENESS OF THE OFFICIAL TEAM IN THE THIRD ROUND OF THE KF1 WORLD CHAMPIONSHIP IN BELGIUM. LENNOX ACHIEVES THE FIRST WIN OF THE SEASON, WITH TIENE RUNNER-­‐ UP. CRG PLAYS A LEADINGROLE ALSO IN THE KZ1 AND KZ2 WORLD CUP.

Genk (Belgium). CRG has been always very confident and willing to redeem itself as soon as possible: in Belgium, for the third round of the KF1 World Championship and the KZ1 and KZ2 World Cup, CRG-­‐ Maxter was the team which showed the best competiveness in all the categories, starting from the KF1 where the all black team played a leading role and conquered an awesome triple podium and a first win with Jordon Lennox-­‐Lamb.

In the first of the two finals of the KF1, the English Jordon Lennox-­‐Lamb got onto the second step of the podium and, in final 2, the young English repeated his excellent performance finishing just behind Nyck De Vries (Zanardi-­‐Parilla) – moreover his teammate Felice Tiene arrived in third after a gripping recovery. After the end of the race, De Vries was disqualified for unsportsmanlike conduct with Camponeschi: he made the Italian driver spin touching his kart during the last lap, while Camponeschi was leading the race. So Lennox inherited the first place, Tiene the second.

Tomorrow – Sunday 4th September -­‐, there are the other two finals in schedule. There are great expectations for CRG, after this crescendo of performances which started in the end of July in the previous event of Zuera in Spain. Laura Tillett is definitely improving fast: she is now the third protagonist for CRG. Only the uncertainty of the weather, always nice so far, can somehow make the final result of the World Championship of Genk unpredictable. Forecasts say that there will be showers and sunny periods: let’s hope that the weather will not alter the sports results on the track.

In KZ1 all the three CRG drivers exchanged the top positions with each other, with David Forè always playing a leading role. He was the poleman in the time trials and won two qualifying heats; behind him his teammate Arnaud Kozlinski, who won one of the heats as well.
Fifth, in the temporary ranking, Jonathan Thonon, thanks to his two second places in the heats and showing to be more and more performing after an uncertain start due to an imperfect engine setup but, anyway, always ready to do his best in crucial circumstances. Surely, it will be a great final, to be followed from the beginning till the end and with all the three CRG drivers battling for the world title

IN KZ2 TORSELLINI IS THE NUMBER ONE FAVOURITE.

In KZ2, the Italian driver Mirko Torsellini from Siena is the king of the first racing day thanks to his two wins and a second place in the three qualifying heats that have been run so far and after his overall first place of the time trials. A great result which confirmed, once more, the competiveness of the young CRG-­‐Maxter driver, who has definitely entered the inner circle of the world top drivers.
Among Torsellini’s rivals in his challenge for the KZ2 world title there is his teammate Fabian Federer, the new KZ2 European champion with his CRG private team, always very fast here in Belgium. Federer even won one of the heats and placed second in the other two. We will have to wait until the result of the last series of heats of Sunday morning to know the driver who will start from the pole position in the final phase on Sunday afternoon. Also Luca Tilloca behaved well. The strong driver from Alghero (Sardinia) on the track of Genk has used for the first time the new chassis made by CRG which, from this event, deploys once again the Kalì-­‐Kart brand, a brand whose history goes back to the Seventies. Tilloca performed well especially in one of the heats placing third. Christian Hostert, on the other hand, did not so well: he overturned the kart in one of the heats.