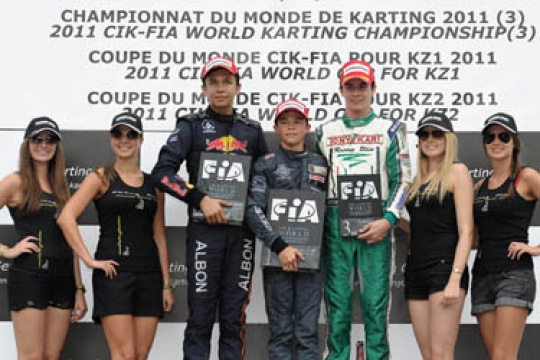 Notwithstanding the early morning rain, no less than 5,000 were on hand at the Genk circuit this Sunday (there had already been 3,000 the day before) to watch the third event of the KF1 World Championship as also the KZ1 and KZ2 World Cups, the two divisions for karts fitted with gearboxes. And they thoroughly enjoyed the visit, as the spectacle being provided by the best karting drivers was enough to take their breath away!

For this third round, the KF1 World Championship definitely retained its share of developments and spectacle on the Genk circuit. On Saturday the Italian Flavio Camponeschi (Tony Kart-Vortex) clinched the first Race ahead of the Brits Jordon Lennox-Lamb (CRG-Maxter) and Alex Albon (Intrepid-TM). As for the championship leader, the Dutchman Nyck De Vries (Zanardi-Parilla), he finished 4th after a splendid climb-up from the last place on the grid, as the result of a technical problem during the practice sessions. In the second Race however De Vries this time around was the first to take the chequered flag ahead of Jordon Lennox-Lamb and the Italian Felice Tiene (CRG-Maxter)… however Nyck was excluded from the Race as the result of coming into contact with Flavio Camponeschi. The Dutchman’s Entrant having made an appeal regarding the decision, the reigning World Champion recuperated his points whilst waiting an ulterior judgement.

On the spectacle front, the two Races held this Sunday were on a par with those of the previous day. Having grabbed pole position during the morning practice sessions, held on a drying track, Nyck De Vries got the better of everyone … Prior to committing a small error when braking too late in the first bend. Beaten by a mere 6/1000th during the timed laps, Alex Albon was only too pleased and slotted into the opening at the same time as the Belgian Sébastien Bailly (Kosmic-Vortex). For De Vries, matters became even more complicated seeing he was lightly nudged by another driver returning to the track and going into a full spin. Whilst Albon was building up some distance and a ferocious battle was going on between Sébastien Bailly, Felice Tiene, Yu Kanamaru (Tony Kart-Vortex) and Léo Roussel (Sodi-Parilla) for second place, Nyck De Vriees managed to climb back into the pack. At the end the Dutchman still managed to grab the lowest tread of the podium behind a determined Albon and Sébastien Bailly, Léo Roussel and Flavio Camponeschi completing the top-5.

Having taken full advantage of his pole position in order to have a good start in the fourth and final Race of the weekend, Alex Albon soon found himself being threatened by Nyck De Vries. During several laps the two championship leaders swapped the lead under the applause of the crowds. Taking advantage of the fight the Italians Ignazio D’Agosto (Tony Kart-Vortex) and Flavio Camponeschi went as far as to surprise the two leaders by taking over the race reins. But Nyck de Vries was too strong … Five laps from the chequered flag he recovered the command and flew off to clinch victory. At the end of the race Alex Albon managed to grab points for second place just a hair’s breadth ahead of Flavio Camponeschi, the Frenchman Anthoine Hubert (Sodi-Parilla), who put in a brilliant climb up through the pack from 21st place on the grid, and Léo Roussel.

In the championship Nyck De Vries and Alex Albon have distanced themselves and will continue their duel in less than two weeks time at Sarno, in the vicinity of Naples, which will stage the fourth and penultimate rendezvous of the season. 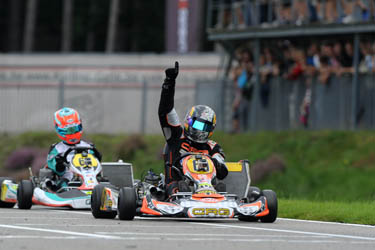 KZ1 : Thonon suspense all the way

Pure spectacle and suspense, the scenario of this KZ1 World Cup KZ1 (the karts fitted with gearboxes) was on a par with the very best of Hithcock’s films. After two days of sun and heat, the rain which had been forecast was at the rendezvous on Sunday morning and so it was on a rain soaked track that the 34 finalists took the start of the Pre-Final. Under pretty precarious road holding conditions these tightrope driving specialists proved their talents. For some the death toll was already sounding in this Pre-Final, with amongst others the regional driver Rick Dreezen (Tony Kart-Vortex) and his team mate the Italian Marco Ardigo, the former being a victim of an accident and the latter as the result of inappropriate tuning. On home soil the Belgian Jonathan Thonon (CRG-Maxter) performed brilliantly by clinching the pole position for the Final ahead of the Italian Sauro Cesetti (Birel-BMB), who had come back from 13th place on the grid, Arnaud Kozlinski (CRG-Maxter), the young Dutch female Beitske Visser (Intrepid-TM), the pole holder Davide Foré (CRG-Maxter) and the title holder Bas Lammers (Intrepid-TM), who in the rain managed to save a difficult start to the weekend by climbing back up from 19th into 6th place.

At the time of the Final the track had dried out and it would be anyone’s guess as to who would come out as the winner. During 22 laps the battle between these karting professionals enthralled the large crowd of Belgian enthusiasts who had come out to cheer on their representatives. Quickest at the start, Jonathan Thonon was soon disposed of by Beitske Visser. A few hundred meters further on it was Bas Lammers’ turn to take over the command ahead of his young compatriot and … Yannick de Brabander (Parolin-TM), who had come back from 8th place on the grid. In an incredible overtaking manoeuvre the Belgian got the better of the two Dutch drivers. Whilst Beitske Visser immediately threw in the towel, engine cut-off, four drivers managed to escape from the pack. Behind Yannick de Brabander, Davide Foré (four times World Champion and winner of the World Cup back in 2006), Jonathan Thonon (three times winner of the KZ1 World Cup) and Bas Lammers, the title holder, constantly swapped places, whilst at the same time putting pressure on the leader. At the beginning of the last lap de Brabander still had a small lead over Thonon and Foré, Lammers having been left behind. However Jonathan Thonon had not had his last say. Taking on a most improbable attack some two bends from the finish, Jonathan surprised Yannick de Brabander and offered himself his fourth World Cup! Obviously disappointed his rival did in fact provide for a one-two Belgian finish … to the great delight of the crowds who had fully appreciated one of the greatest Finals of these last few years.

On the lowest tread of the podium, Davide Foré has shown that notwithstanding his 37 years his passion and speed have remained intact! Following his victory in 2010, this time around Bas Lammers found himself at the foot of the podium ahead of Arnaud Kozlinski (CRG-Maxter), Antonio Piccioni (Parolin-TM), Marco Ardigo (Tony Kart-Vortex), Sauro Cesetti (Birel-BMB), Jérémy Iglésias (Intrepid-TM) and Thomas Mich (Monza-TM). 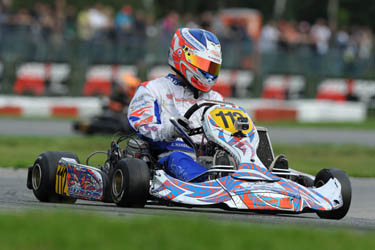 KZ2: Hanssen from one end to the other

Even though he was not exactly competing in his own country, the Dutchman Joey Hanssen (Lenzokart-TM) rather showed the impression of being at home in Genk, within the vicinity of the border, where the first edition of the KZ2 World Cup (the second division for karts fitted with gearboxes) was being held. Winner of the Pre-Final, Hanssen then put up an irreproachable performance during the Final which he practically led from beginning to end. Even though the Croatian Kristijan Habulin (CRG-Maxter) took the lead at the start, the Dutchman soon reclaimed his right as from the second lap to take off and head for an indisputable victory. Behind him it was another Dutchman Yard Pex (CRG-Maxter) who ensured another double for the drivers emanating from the Netherlands. Having set off from only 17th place following an accident at the start of the Pre-Final, the Italian European Champion Fabian Federer (CRG-TM) climbed back up through the pack to finally clinch the lowest tread of the podium in front of Kristijan Habulin and the Italian Yuri Lucati (BRM-Maxter). Having experienced mechanical problems in the Pre-Final, Mirko Torsellini (CRG-Maxter) and Joel Johansson (Energy-TM) were back up in 6th and 7th positions having respectively started out from 30th and 29th places on the grid. The top-10 was completed by the Frenchman Morgan Weber (Merlin-TM), the Italian Luca Tilloca (VSK-Maxter) and the Czech Jan Midrla (Birel-TM).