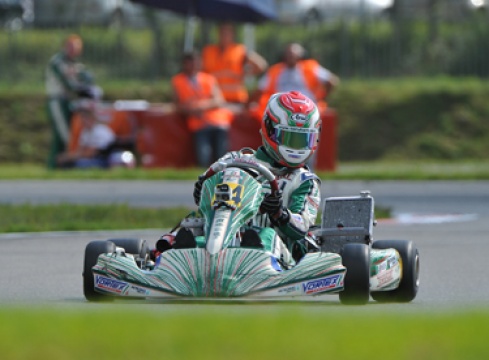 The World Championship has stopped in Belgium for its third round out of five. Italian driver Flavio Camponeschi is the fastest driver already from qualifying, while championship leader Nyck De Vries has a problem on the engine, which prevents him from taking part in the qualifying practice.

Camponeschi proves the man to beat and in Final 1 clears off all doubts as to who will take the win. The Tony Kart driver has a good margin already after few laps as Briton Lennox-Lamb is the best of the rest, with fellow countryman Albon a lonely 3rd. The race doesn’t provide huge excitement besides the De Vries’ comeback, who after starting from the back of field managed to climb back to 4th. But Genk circuit is quite different from Zuera, and the young Dutchman’s comeback stops there. Poland’s Karol Basz, second in qualifying, ends in the back due to a contact while fighting for 4th.