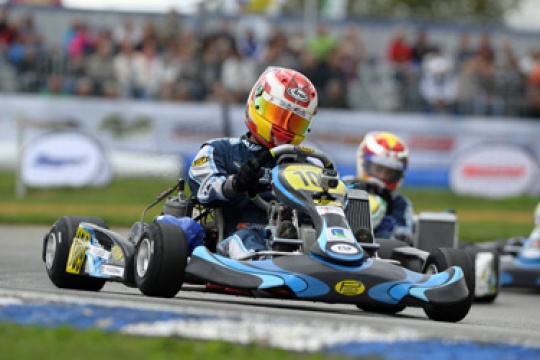 For its second event of the 2011 season, the CIK-FIA ‘U18’ World Championship (under 18) headed on down to the Essay circuit, located in Normandy. Notwithstanding cold weather interspersed with some rain, the qualifying sessions and the first qualifying rounds held this Saturday rather confirmed the hierarchy built up in Italy, during the first meeting. As such the Brit Matthew Graham (Zanardi), the Finn Pyry Ovaska (Maranello) and the Italian Antonio Giovinazzi (PCR) confirmed their strength for top speed as they constantly battled it out up front during their different qualifying rounds.

Amongst the major surprises of the day we noted a best qualifying time and winner of one round, namely the Dutchman Dave Blom (Intrepid), not forgetting the Finn Tomi Katajamäki (Maranello) as also the Italian Michelle Beccaria (Top Kart), who were also fastest in their respective heats. Last but not least the Frenchman Leo Roussel (Sodi) proved his ambitions in front of a home crowd with a second best time in the qualifying sessions, followed by two victories in the qualifying heats. The last three heats will be held on Sunday morning allowing the 34 finalists to be determined. The latter will then compete in two Pre-Finals (the second one with an inverted starting grid) followed by the Final at the end of the day.

During this last weekend of August the Essay circuit also welcomes the CIK-FIA Academy trophy.  The best timed lap by the Frenchman Esteban Ocon was later in the afternoon excluded from the meeting for technical irregularities. This allowed the Spaniard Mikel Azcona to convert his second time in the qualifying sessions (he had in fact produced the best time in his series during a partially wet track) to pole position for the first Race. The Monegasque Charles Leclerc, who had already created an impression with his two victories during the qualifying sessions, is next to him on the front row. The second row of the grid also saw two winners of the qualifying heats: the Brit Benjamin Barnicoat and the Albanian Aleksander Ndrio. Present leader in the championship, the Frenchman Dorian Boccolacci did not actually win any rounds, but he was constantly amongst the fastest runners. The top-10 at the end of the qualifying rounds was made up out of the Swede William Sward, the Austrian Florian Janits, the Ukrainian Oleksandr Tkachenko, the Spaniard Diego Rodriguez and the Rumanian Ioan Stefan. In this category where all drivers compete with the same material, two Races offering up the same number of points is scheduled for this Sunday afternoon.
For Media Information Purposes - No Regulatory Value
High resolution photos: http://www.cikfia.com/media/photos.html