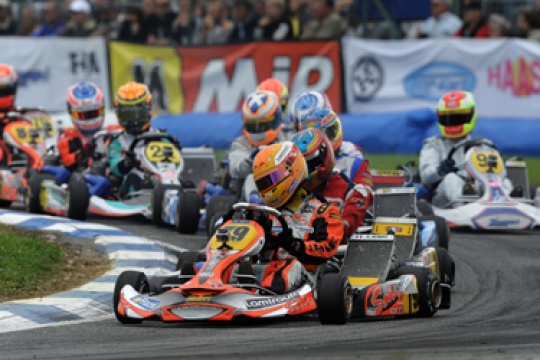 For any driver to hear one’s own national anthem played at the end of a World Championship on home soil is always a great moment. Something which Anthoine Hubert experienced this Sunday
when he took full command during the final of the World U18 (under 18) on the Essay circuit in Normandy.  Finishing second, the Finn Pyry Ovaska increased his lead in the championship whilst the Brit Matthew Graham confirmed his Italian victory by climbing up on to the third tread of the podium. In the CIK-FIA Academy Trophy the Brit Benjamin Barnicoat and the Monegasque Charles Leclerc shared the two victories of the day, and at the same time taking a lead in the championship.

Once again the “U18 World Championship” proved its worth on the Essay circuit, the stage for the second event of the season. The battle between the 74 entrants, all fitted out with the same FIM power unit, was quite simply superb and one needed to be strong to break away from the pack. Presently leader in the competition, the Finn Pyry Ovaska (Maranello) started off the weekend strongly ending the qualifying heats up front – and gathering a few points with a view to the championship – ahead of the Dutchman Dave Blom (Intrepid) and the Finn Tomi Katajamäki (Maranello). But it all rests on the Final to determine the winner of the meeting... Excellent during the two Pre-Finals, of which the second with an inverted starting grid, the Frenchman Anthoine Hubert (Sodi) took off from pole position for the Final and immediately took command of the situation. Notwithstanding a neutralisation in the race as the result of an impressive accident at the start, luckily without any serious consequences, the young Frenchman never let off crossing the finish line as overall winner – to the applause of the spectators. « After the neutralisation, I forced myself to attack to the full and not to look back », Anthoine explained. « It was only three laps from the finish that I looked behind me. I noticed that Pyry Ovaska was there and so I shut the door in order to stop him overtaking me. This world victory on home ground is truly a great moment in my career and it allows me an opportunity to become world champion when I race in the final round at Sarno. »

Less than one second behind the winner, Pyry Ovaska and Matthew Graham (Zanardi), winner of the opening race at Ortona, were delighted to score important points with a view to clinching the title.  Having started off from 9th place on the grid Léo Roussel (Sodi) just missed out on a podium which also the Italian Federico Savona (Top Kart) and the Swiss Yves Von Aesch (Swiss Hutless) had their eyes on prior to being forced to retire. The top-10 of this Final was completed by the Austrian Stefan Riener (Intrepid), the Brit Henry Easthope (Sodi), the Scot  Robbie Dalgleish (Top Kart), the Dutchman Dave Blom (Intrepid), the Spaniard  Toni Alarcón (Righetti) and the Dane Martin Mortensen (Mach 1).

Thanks to his great performances both during the qualifying heats as also the Final, Pyry Ovaska was able to build up a lead in the championship. With 131 points, he heads up Matthew Graham (106) and Anthoine Hubert (93) and he will be in a perfect position when he arrives at Sarno, where the third and final round takes place at the beginning of November. 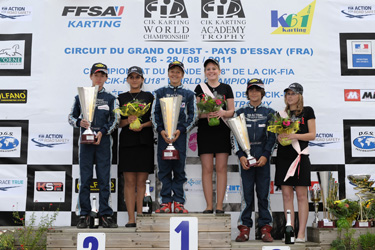 The second round of the CIK-FIA Academy Trophy held on the Essay circuit was not without consequences. Leader after the qualifying heats, the Spaniard Mikel Azcona also clinched the pole position for the first Race. On the grid he headed up the Monegasque Charles Leclerc, the Albanian Aleksander Ndrio, the Brit Benjamin Barnicoat, the Swede William Sward and the Frenchman Dorian Boccolacci, the competition leader prior to this French event.

Somewhat limpid, the first Race saw Mikel Azcona and Charles Leclerc get away, with the driver from Monaco finally taking the first tread of the podium three laps from the finish. However for not having respected the start procedures, the Spaniard received a 3 seconds penalty and had to let the second and third treads of the podium go to Benjamin Barnicoat and Dorian Boccolacci. Azcona finally finished in 4th place, ahead of the Swede William Sward, the Russian Vsevolod Gagen, the Finn Juho Valtanen, the Albanian Aleksander Ndrio, the Belgian Simon Mirguet and the Austrian Florian Janits.

The second confrontation was an entirely different scenario. Initial leader, Charles Leclerc had to give way to the attacks of Dorian Boccolacci. However it was the Brit Benjamin Barnicoat who came in between and took over the command of the race. But Boccolacci was not going to leave it at that and with some brilliant driving some four laps from the finish he retook the lead never to relinquish it. Unfortunately for him, the young Frenchman was later disqualified for insufficient weight on the scales after the race. And so Benjamin Barnicoat recovered the victory ahead of the Russian Vsevolod Gagen (amongst others winner of the education programme known as Edukart, similar to Hubert in U18) and Charles Leclerc. A highly emotional Benjamin wanted to dedicate his win to his fellow countryman Martin Hines, who had passed away following a painful sickness this weekend, and who had left his mark on the history of karting with his three world titles in Superkart 250cc as also his flair for discovering young British talent such as Lewis Hamilton, David Coulthard and Anthony Davidson. « Had it not been for Martin, I would not be here », the winner of the second Race, a mere 14 years old commented. « He was the one who discovered me allowing me to integrate the Racing Step Foundation. Thanks to him, I know that if I perform well and work hard I will have a true opportunity of reaching great heights. I could never thank him enough and I obviously want to dedicate this victory to him. I now hope to be able to repeat this during the final in Sarno to finish this Trophy on the highest tread of the podium. »

Behind this leading trio, the Finn Juho Valtanen and the Swede William Sward confirmed their form finishing in the top-5 ahead of the Spaniard Mikel Azcona, the Finn Aatu Moilanen, the Norwegian Martin Ellegaard, the Austrian Florian Janits and the Turk Kaan Onder.

The battle for the title between Charles Leclerc (173 points) and Benjamin Barnicoat (167) in Sarno should be superb, notwithstanding the fact that the Spaniard Mikel Azcona (141), the Greek Filipos Kalesis (134) and the Finn Juho Valtanen (131) haven’t had their last say. With still 100 points to share out, even Dorian Boccolacci (126) could still wipe out his difficult weekend in Normandy. So it’s rendezvous at the foot of Vesuvius from 4th through to 6th November!