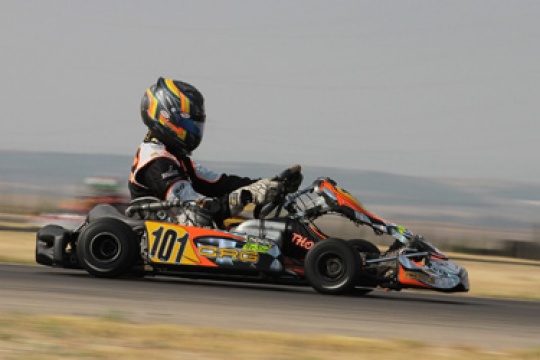 GREAT EXPECTATIONS FOR THE SINGLE ROUND OF THE KZ1 AND KZ2 WORLD CUP, WHERE CRG-MAXTER COMES BACK TO PLAY A LEADING ROLE. THE GOAL IS ENRICHING THE TEAM HONOURS. THERE IS OPTIMISM ALSO FOR THE CONCURRENT THIRD ROUND OF THE KF1 WORLD CHAMPIONSHIP

In the picture, Jonathan Thonon in KZ1.

Lonato del Garda (Brescia - Italy). One of the most important event of all the season – and for sure the most prestigious – for the gearbox categories (KZ1 and KZ2) is about to start in Genk. The Belgian town is, in fact, the venue of the CIK-FIA World Cup, a single round event from 2nd to 4th September.

CRG BACK IN THE GAME AND READY TO PLAY A LEADING ROLE IN THE KZ1 CHAMPIONSHIP.  After the gap year in 2010, CRG-Maxter official team comes back with terrific chances in this competition, where the team can boast numberless successes and an almost absolute supremacy in the last three years thanks to Jonathan Thonon in KZ1. It is him, the Belgian champion, the favourite one for the final win. Moreover, the CRG driver is willing to redeem himself after his unlucky participation both in the WSK and in the recent European Championship in Wackersdorf. On this track in his country, Thonon has always achieved excellent performances, and this time too, for sure, he will be able to get the most out of the competiveness of a top performing chassis such as the CRG one, together with the power of the prizewinning Maxter engine, assisted by the French Patrick Savard’s Tec-Sav.
There are two more world champions racing for the CRG Official Team: Davide Forè, always among the best also in this season (5th in the European Championship run in Germany), and the French Arnaud Kozlinski,
among the overall fastest and excellent test driver for the development of the Maxter engine, directly set up by the Italian constructor.
Also the young Jorrit Pex will be racing for CRG, with the CRG Holland Team; he made himself conspicuous in last year’s World Cup, where he got the pole position and was the runner up after the qualifying heats.

READY TO FIGHT ALSO FOR THE KZ2 WORLD CUP. For the first time, in Belgium, also the world cadet championship, with 78 entrants for the KZ2 World Cup. Here, CRG Official Team stakes it all on the young driver Mirko Torsellini, real discovery of this season after his excellent third place in the European Championship of Wackersdorf and the second place in the recent WSK Euro Series. On Torsellini’s side in  the Official Team, the driver from Luxembourg Christian Hostert, together with the Italian Luca Tilloca, a real fighter who, on this special occasion, will use a new chassis produced by CRG, with the VSK brand, introduced at the beginning of the year during the InternationalFair of Montichiari.
But in KZ2 everybody will be focused on another CRG driver: the new European Champion Fabian Federer from Sudtirol. He is a private driver but he is assisted by the Italian constructor in the supply of the chassis. After his triumph in Wackersdorf in the European Championship of the category, his season has got a boost and he is now the leader of the Italian championship ranking.
The competiveness of the CRG chassis is confirmed in a category such as the KZ; in Genk, the Italian constructor will be represented also by several private teams: CRG Holland (with the Dutch drivers Giovanna Bootjes, Yard Pex and Chantal Van Haandel, the Norwegian Emil Antonsen, the German Malk Slebecke), the KK1 Team (with the Croatian Kristijan Habulin and Nedjeljko Vucelic) and Renda Motorsport (with the Italian Francesco Celenta).


GREAT OPPORTUNITIESFOR THE KF1 WORLD CHAMPIONSHIP. The appointment in Genk will be completed by the third round of the KF1 World Championship, where CRG-Maxter Official Team fields its three standard-bearers Felice Tiene, Jordon Lennox-Lamb and Laura Tillett. They are all set and ready to redeem themselves after a troubled first part of season. In the second round of Zuera they already took a good step forward; in fact, the three CRG drivers turned out to be among the fastest in more than an occasion during the Spanish weekend. In Belgium, the results of the last developments are expected: results that will take CRG to the top of this category too.

THE DRIVERS AND THE RACE NUMBERS OF CRG OFFICIAL TEAM IN THE CIK-FIA WORLD CHAMPIONSHIP AND KZ1 AND KZ2 WORLD CUP - GENK (B) 2nd-4th.09.2011