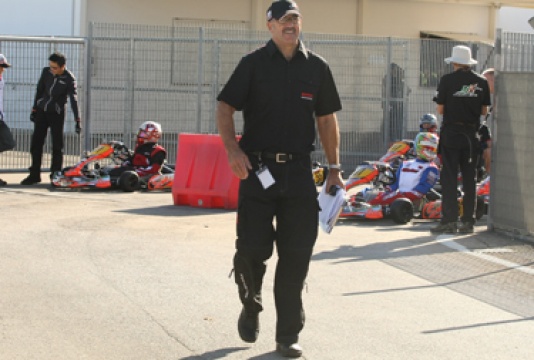 
As a race official, Nigel’s experience is vast.  Outside of his Rotax duties, Nigel has been sanctioned by the MSA (the UK’s ASN) as an International Clerk of the Course/Race Director and since 2000 has overseen some of the UK’s top Series and Championship events.  Indeed, it was his success in this arena that first bought him to the notice of Rotax and made him an obvious candidate to oversee the successful running of the EuroMax Challenge and World Finals.  In 2010 Nigel was named Clerk of the Course/Race Director for Britain's Super One Championship, whose past champions include Formula One World Champions Jenson Button and Lewis Hamilton.

This year, Nigel has been selected as the Race Director for The Viking Trophy in Norway and The Asian Cup in Macau. When not overseeing the action on the track, Nigel is well versed in the challenges faced by racers, officials and track owners alike.  As Chairman of the Trent Valley Kart Club, he lead the successful campaign to host the first CIK event on British soil in over twenty years in 2010 at the excellent PF International track and has been intrinsically involved in the circuit’s 350m expansion (including a flyover) which should be ready in time for the country’s third CIK event in 2012. Nigel is also a long standing member of the MSA Kart Committee.

From a racer’s perspective, Nigel is an excellent choice due to his own experience behind the wheel.  During a twenty year time span, starting in the sixties, Nigel won numerous National UK Championships working with the likes of Terry Fullerton as well as being crowned Middle East Champion in 1980.  In 1984, Nigel was selected as a member of the four man British Team that took part in the European Championships.
Nigel has also enjoyed considerable success in cars.  In 1990 Nigel secured the fiercely competitive British Metro Turbo Cup – a single make series that firmly places the onus on the driver.  Nigel followed this up with national level wins behind the wheel of both Rover 216GTis and Rover Turbo Tomcats capping his career with a memorable win at the 1994 Support Race for the British Grand Prix.

By enlisting the services of the Race Director for both the Rotax World Finals and the EuroMax Challenge, MAXSpeed is continuing its ongoing program of enhancing the Rotax Max Challenge Series in the US and believe that all will benefit from working alongside Nigel – whether as a Rotax Race Official or a competitor with dreams of one day racing in either Europe or at the World Finals. MAXSpeed firmly believes that Nigel will be a valuable addition to the “Team” for this year’s event and looks forward to the continued success of the Rotax Max Challenge Series and the US Grand Nationals.