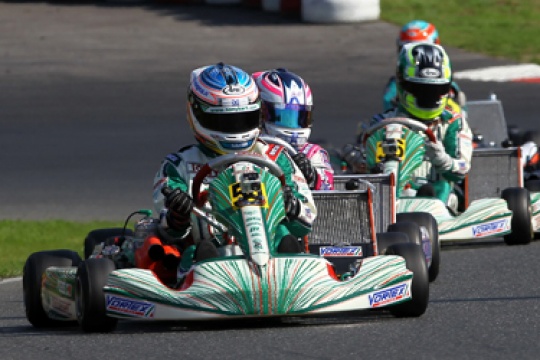 On the occasion of the CIK European Championship for the KZ1 class, held in Wackersdorf (Germany), our Racing Team constantly was at the top. Our drivers have been the great protagonists thanks to the excellent Racer EVRR and to the new Vortex RVXX.

Unfortunately, during the core-final stage, when our driver Marco Ardigò was so close to the title, the rear left side tire, defective one, broke thus making him lose any chance of success.
At Wackersdorf Pro-Raceland Circuit, the first round of the CIK World Championship for KF1 category took also place and during this competition too, our chassis proved to be competitive and reliable in any track condition.

KZ1 – Since the qualifying practices our drivers ran at their best, Dreezen (48.282) took the fourth position while Ardigò (48.591) got the second best timing of his group.
During the delicate rounds Ardigò was one of the fastest drivers, his Tony Kart-Vortex was always excellent, winning one round and taking the second position in the other one, finally gaining a third position at the starting grid. Dreezen raced even better, conquering the first row in the pre-final which represented to our driver, a preliminary phase “only” to be better trained for the decisive round.
Actually Ardigò easily took the second position, signing 48.193, as many times as he has had the chance to.
During the final, as previously said, our colours unfortunately took part in a bad scene. At the twelfth round anything seems to run perfectly, Ardigò hunted down the leader De Conto and is ready for the final fight, also thanks to his better running during the whole race
than his competitor’s. But the rear tire suddenly gave way compelling him to retire.

KF1 – For the whole weekend drivers running with Tony Kart-Vortex material stand in the first positions, evidence of very good performances. Camponeschi, Kanamaru, Lock and D’Agosto showed off during the 4 competitions, scheduled by the regulations, for this first world event.
In the first race D’Agosto resulted in a perfect recovery from the last position, where he had been put because of a minor accident during the qualifying heats. Actually, our Italian driver was at the end very close to the podium in race-1 but he succeed then in race-2 only, when he got the second position, in front of the Tony Kart of Lock, Junior Racing Team’s driver.
On the occasion of both Sunday competitions we got our drivers on the podium, with Camponeschi gaining the third position in race-4.
During the whole competition, our technical material gave evidence to be the best in terms of unchanging good performances, thus allowing our drivers to give their best on the track gaining the first positions. We would like to underline that any of our factory’s chassis, as well as Racer EVRR, twice took 50% of the top-ten positions (race-1 and race-4).

All these world events will be scheduled with a four-weekend format, including four races each, two on Saturday and two on Sunday. At the end of any world appointment, every driver will have the opportunity to reject his worst result out of fourth. The next scheduled CIK-FIA World Championship event in the calendar is on the next July 20th to 24th, at the Zuera Circuit, Spain.
Official CIK-FIA classifications at
http://www.cikfia.com/championships/cik-calendar/wackersdorf/event-guide.html

“When unlucky events happen, as the one Marco (Ardigò) incurred in, they are beyond our control and the work done, and that is why we are particularly disappointed. We did our best and we are well aware both Vortex engines and chassis perfectly ran, as our winning chances have proven.
Asphalt, due to changing weather conditions, never was the same and we continuously had to adjust the chassis set-up, nevertheless we had a good response in any condition, since the chassis is fast and versatile. A tire’s puncture during the final phase of the race is neither up to us, nor to the driver and nothing else has to be said. Concerning KF1 category, we cut a fine figure and we will go on working this way, to further ameliorate our next attendance in Zuera. The World Championship is long-term and we will never have to lower our guard.”