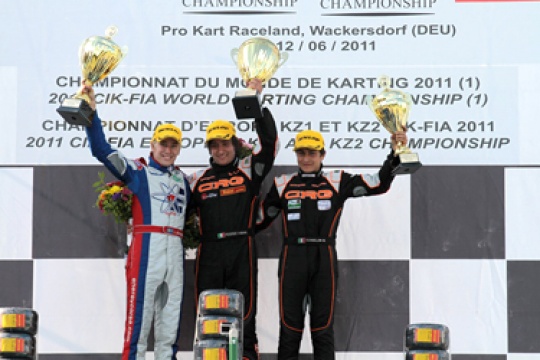 IN KZ1, FORE’ PLACES FIFTH WHILE THONON RETIRES FOR A PUNCTURE AND KOZLINSKI GOES OFF TRACK. IN KF1 THERE ARE STILL SOME TENTHS TO GAIN TO REACH THE TOP TEAMS.

Left, the podium the KZ2 with Federer European Champion, Johansson and Torsellini

Wackersdorf (Germany). Fabian Federer’s success and the third place grabbed by Mirko Torsellini in the KZ2 European Championship are the most remarkable CRG’s achievements on the Pro Kart Circuit of Wackersdorf (Germany), which was also the venue of the KZ1 European Championship and of the first event of the KF1 World Championship.
CRG Official Team managed to play a leading role not only in KZ2 but also in KZ1, where the CRG chassis and the Maxter engines were a perfect match throughout the whole weekend. Unfortunately Jonathan Thonon was stopped by a puncture, while Arnaud Kozlinski had to make the best of the fastest lap of the final: he went off track because of the poor grip of his tyres.
In KZ1 only David Fore’ crossed the finish line, getting an excellent fifth place. Despite the exceptional qualities of the chassis and of the Maxter engine (both the most performing of the whole pack), victory slipped off CRG’s hands.
Among the emotion to be remembered in Wackersdorf, Thonon’s feat in the second qualifying heat. The Belgian driver managed to grab the win with a thrilling overtaking just before the finish line which allowed him to win with a 9 millisecond lead over Paolo de Conto, who would then win the final becoming European champion of the category. 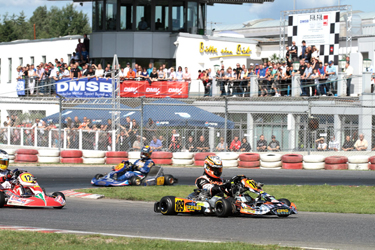 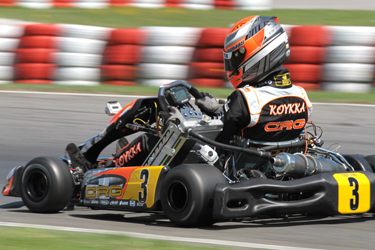 Left, Mirko Torsellini, third in KZ2. Right, Koykka in KF1In KZ2 the winner was the hard-fighting Federer, from Sudtirol. He is a private driver who had managed to make himself conspicuous since the qualifying heats and had showed to feel particularly at ease with a performing chassis in every condition. After placing second in the pre-final, Federer got an early lead in the final and kept it until the finish line. Mirko Torsellini, on the other hand, did not get as much as he deserved. He has just joined the CRG-Maxter Official team, and he literally dominated his rivals in the qualifying heats, winning all the five races. Then, in the pre-final, he got bumped into when he was leading the race and had to be content with a fifth place. In the final he recovered and eventually he fully deserved the third step of the podium, apart from achieving the fastest lap.
Definitely more unlucky the other two CRG-Maxter official drivers; the Brazilian Felipe Fraga was obliged to retire at half race, while Luca Tilloca was involved in a crash in the first part of the final, when occupying a good position.
In the concurrent event of the KF1 World Championship, in the first of the five events of the world series, CRG-Maxter Official Team had to cope with several troubles with the Maxter engine set-up. These troubles did not allow the CRG drivers to get remarkable results in the four finals of the event. It was Felice Tiene who got the best result with his 11th place in the first final and a 13th place in the fourth final. Anyway, all the CRG drivers - Jordon Lennox-Lamb, Matias Koykka and Laura Tillett – fought inch by inch, but they just needed to be a bit faster to reach the top drivers. All the four KF1 finals were dominated by Nyck De Vries on Zanardi. 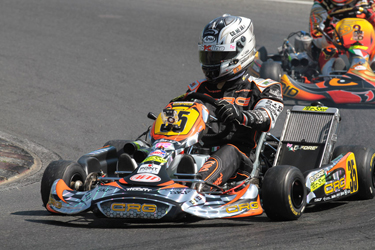 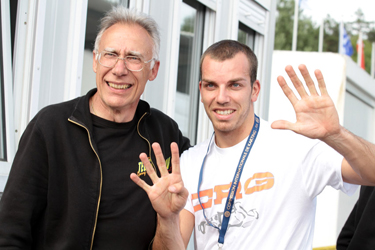 Left Forè in action. Right, Thonon (right) and Savard after the 9 millisecond win on De Conto.

Giancarlo Tinini, CRG SpA Chairman: “We did well in KZ2. CRG, once again, won the European title, this time thanks to Fabian Federer, while Mirko Torsellini completed the podium. Besides Federer and Torsellini, also Celenta, Tilloca and CRG Holland with Pex were rather performing. On the other hand, in KZ1 we did not gather what we expected: we always get better performances on fast tracks. Then we had those troubles with the tyres, and I think the federation should do something about it. It is also a matter of safety: we cannot keep on racing with tyres which blow up and worn out so fast in the finals. In KF1 we are still developing our engines. Let’s hope we can solve the problems we have as soon as possible.”


Davide Forè (KZ1): “I’m really happy with my fifth place. I was able to go as fast as De Conto, but I was slowed down in the tussle of the first laps. I recovered from the tenth position of the pre-final, but then we were all very close to each other, within a tenth of a second. I gave all I had and I pushed hard during all the race, but it was impossible to do more on such a winding and narrow track. I must say thanks to all the team, my mechanic and Tec-Sav for their assistance.”


Jonathan Thonon (KZ1): “Unfortunately we noticed immediately that there was something wrong with the tyres. Then I got that puncture and I had to retire. It is a shame, because I could have got a good result. I achieved the pole position and I was very confident. In the first heat I had a crash in the first lap, but I was able to recover in the second, where I won with a 9 millisecond lead over De Conto. In the pre-final I started 16th and I recovered up to the 8th position. In the final, while 5th after a good recovery, I got that puncture. I’m really sorry for the team, but I’m sure we stand good chances for the World Championship of Genk, in Belgium, on 4th September.”


Press Office
CRG SpA
www.kartcrg.com
All the results on www.cik.fia.com