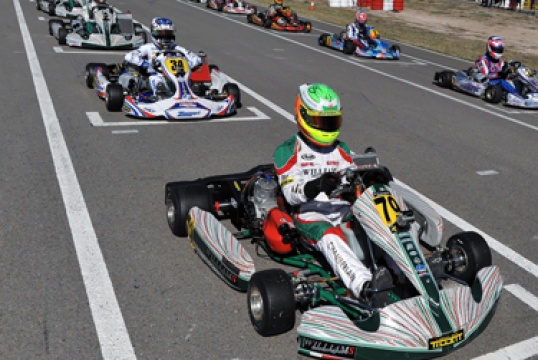 Following the postponement of the CIK-FIA World Championship opening round, German circuit ProKart Raceland in Wackersdorf is going to host the kick off of the 5 round championship, after nine years during which the World Champs has been run as a single round event. With the top direct drive class, the German circuit will also host the single round European KZ1-KZ2 Championship. In the top gearbox class, the world’s best of the last 20 years will fight for the title, as 111 drivers will take on the grids in KZ2. If the weather allows it, the show is guaranteed!


The World Championship 5-round format is back in 2011 after nine years during which it has been run as a single round event. The kick off in Wackersdorf was decided after the Suzuka original opening in May was postponed to November following the nuclear disaster in Fukushima, Japan last 11th March.
The last time the World Championship was held over more than one round was in 2002, when Dutch Van der Garde (Crg/Maxter) won the title. The same format was also in place for the WC of 1967/68/69 and 2001, when another Crg/Maxter driver, Tonio Liuzzi took the crown. Considering the importance of the title, being one of four recognised as FIA World Championship together with F1, Rally and GT, the multiple round format seems to be the most suitable to represent the value of such event.

Despite this, entries are not mind-blowing, as only 35 drivers will take on the grids in Wackersdorf. Above all, the two protagonists of last year WC held in Zuera, Spain, Nyck De Vries and Jordan Chamberlain. The British driver will certainly try to take his revenge for that last lap that cost him the crown in 2010. Besides the Dutch and the Brit, other drivers such as Bailly (Belgium), Litchfield (UK), and Toman (Czech Republic) will fight hard and surely come into play using all their experience. Not only veterans, as the starting grid will also see 2010 World Cup for KF3 winner Alexander Albon, his compatriot Jordon Lennox Lamb, as well as Maranello Teemu Suninen and the Italians Flavio Camponeschi, Felice Tiene and Matteo Viganò all in search of glory.

Super racing weekend in Germany, with both gearbox categories racing for the European Championship title. In KZ1, the world’s best will take on the challenge and we will be able to see the rematch of Thonon-Lammers fight started in 2009 that we were not able to appreciate last year, as a result of Crg, Birel and Tonykart boycott of CIK-FIA events. The list of likely winner includes pretty much the entire list of entries – 53 drivers in total – if we were to consider the Hall of Fame. The likes of Foré, Ardigò, Toninelli, Piccini, Cesetti, Kozlinski, Iglesias, Hanley, Lavanant will be joined by the up and coming De Conto, Dreezen, Visser, Abbasse, Piccioni, Guerts and Pex, as well as other veterans like Puhakka, Hajek, Giulietti, Leijtens, Mich, Catt and Convers.
In KZ2, the guess is just as difficult, if we were only to consider the number of entries – 111 in total. Top names include Joel Johansson, Viktor Oberg, Ricardo Romkema, Daniele Delli Compagni, Marco Zanchetta, Alessandro Spenga, Riccardo Negro, Ryan van der Burgt, Marvin Meindorfer, and one of last year’s protagonists, Luca Tilloca.