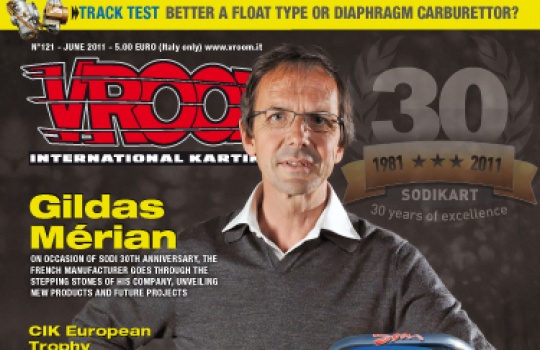 Similar events deserve a grand celebration, and this is why we celebrate Sodi 30th Anniversary dedicating the front cover and a special report to the French manufacturer. 30 years in the karting business are a superb achievement made possible by great vision, ambition and innovation, always searching for new solutions to bring more and more people in the sport. Also in this issue, the European Trophy for KF2 & KF3, a look into CRG new chassis production department, a chat with Danilo Rossi, and much more

CLOSE UP – Sodikart 30th Anniversary
This year Sodikart celebrates its 30th anniversary. The French company has built its reputation on a daring development strategy and constant pursuit of innovation under the sign of quality for both products and services. Driven by Gildas Mérian, its founder and a true visionary on the karting market, the company has been able to define its own development according to an ambitious and daring strategy. Today, Sodikart is the world’s number 1 company in karting, the result of a successful marketing policy thanks to which it can plan the continuation of its activities with serenity.


RACE REPORT – CIK North & South European Trophy for KF2 & KF3
At last, the Euro qualifiers is a serious business. The trophy, which gives access to the European final to be held in Zuera, Spain on 24th July, has certainly made a decisive leap in standards, giving drivers a reason to race for victory instead of just being satisfied with the final event. Also, the new platform is more equal, leaving less to chance.


HOW IT’S MADE – Chassis
How do you make a chassis? To tell you the truth, the column How to make it should have been inaugurated by the chassis, the element that makes the kart stand out more than any other accessory: it is the base on which the most original vehicle in the field of road racing is set up. But, when the column started the new CRG production department had yet to be finished, as we thought it would be and we had to post pone the article.  I hope the waiting has not been in vain, and that you like this column we, also because we managed to shoot exclusive pictures of the new department.


TALKING TO – Danilo Rossi
DR Racing comes from an impressive string of successes in national championships, from Germany to France, all the way to the US and Australia. We talked to DR owner Danilo Rossi to find out more about it, and about the new chassis ready for the next homologation.


CLOSE UP – Eric Lazar
We met Eric Lazar, former stunt driver and Teamster for the movie industry, who told us about his life changing injury and his renewed love for life, helped by a strong feeling of brotherhood he found in the karting community.


TRACK TEST – Diaphragm vs. float-type carburettor
Always been strong supporters of diaphragm carburettors of the direct drive class, we’ve decided to try these carburettors again on a 60cc and on a Tag 125. The choice has fallen on the popular Tonykart/Vortex and Tryton carburettors. Over 1 second per lap and many other advantages for drivers.


TECHNICAL SIDE – Carburetion in the 125 gear class
Many kart drivers are going over to the 125cc with speed gears. Certainly can’t blame them because up till now it is the only class that reflects the performance expectations of most Italian drivers, both professional drivers and amateurs. Tuning carburetion for these karts, though, isn’t as easy as one may think. Here is where to start from and what to take along to the track…


S.O.S. KARTING – Overhauling 125cc gearbox engine – part 1
This month the topic that we are dealing with is overhauling a gear-class 125cc engine... 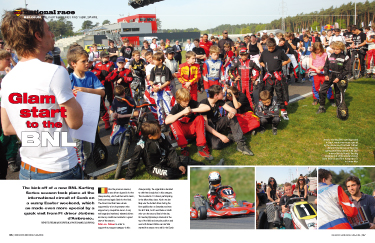 NATIONAL RACES
With the racing season in full swing, we open the National Races section with Belgium BNL opening round, which saw F1 driver Jerome d’Ambrosio as special guest during the prize giving ceremony. Denmark saw the Baltic Cup drivers hitting Grindsted circuit. From Portugal, we report on the 2nd round of the Rotax national trophy, as the Polish Kart Cup stopped at Gostyn for the inaugural race. Australia gives us round 3 of the Rotax Pro Tour, now in its third year, while Singapore saw the opening round at Kartright Speedway, and Malaysia’s Speedway Plus played host to round 2 of the Rotax Asia and Malaysia Challenge. 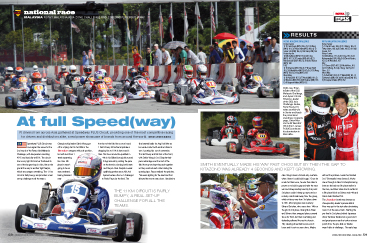 COLUMNS – Mondokart, July National & International racing calendars
The news section is introduced by a series of latest from national and international federations and ASNs. We kick off with British MSA, which announced the date of the single event for the KF2 national championship. The CIK presents the Viking Trophy, introducing the Lotta Hellberg Award for the best recovery in KF3. The Australian Karting Association met up to discuss on the achieving parity of engines in a few categories, while the German DMSB introduced promotion packages for young guns. Also, we take a look at the 24H Karting at Le Mans, scheduled in mid October.
Last but not least, July racing calendar presents 45 national events from 19 countries around the world, as well as 6 major international events.