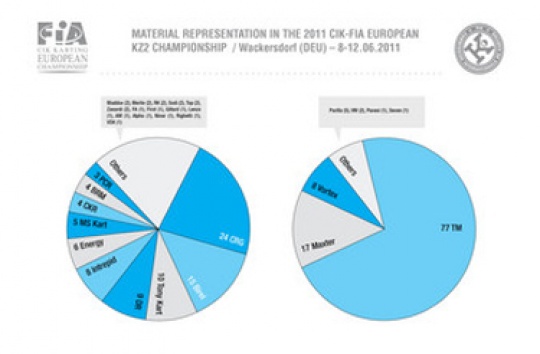 With 111 entries, the CIK-FIA European KZ2 Championship has reached a participation height it had not enjoyed for several years. The revival of a Championship held over one single-event meets the expectations of gearbox kart fans – at least in KZ2 – as they seem to prefer the focused format to that of a series held over several events, obviously more costly in both money and time.


Be that as it may, the European Championship will not be the only opportunity for KZ2s to claim a CIK-FIA title. In early September the same 111 Drivers – and additional ones – will be eligible to enter the maiden World Cup dedicated to that category. The event will take place at Genk, in Belgium, in parallel to the World Cup for KZ1 and third round of the World KF1 Championship.

Whereas in the two top categories (KF1 and KZ1) the direct involvement of factories results in the Drivers having to choose amongst a more limited number of makes, there is a rich variety in KZ2 with private Drivers and Teams, small Manufacturers and Importers. And so there are no fewer than 27 chassis makes represented. In addition to the Zanardi, Intrepid, Tony Kart, Birel, CRG, Sodi or Kosmic brands, omnipresent in the top categories, some younger makes, less known, more “small scale” or seeking to take a new start will want to have a say in the matter on 11 and 12 June at Wackersdorf and may even create a major surprise. Just like the one created by the small Ninar firm in 2010 when the Finnish Manufacturer landed an unexpected but very well deserved third place in the World Cup for KZ1 at Braga.