Author: Vroomkart International
Two to beat: August issue features the first act of the exciting duel between Thonon and Ardigò. In the European KZ1 Champs, Thonon-CRG-Maxter are one above the rest. The strong CRG team gathers around Thonon, outstanding in Mariembourg too where he takes KZ1 European Championship win. In the meanwhile, Ardigò has taken the WSK KZ1 title. Varennes will settle the matter! 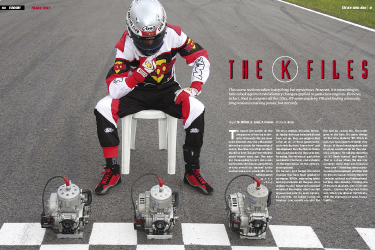 TRACK TEST – TM K9-K9b-K9c   The course we have taken is anything but mysterious, however, it is interesting to take a look again at evolutionary changes applied to gear-class engines. We have, in fact, tried to compare all the 125cc, K9 series made by TM and finding obviously, progressive increasing power, but not only. 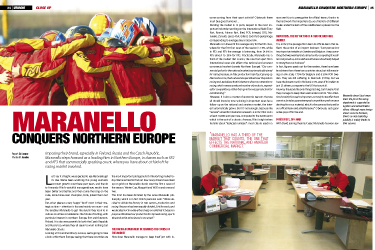 CLOSE UP – Maranello conquers Northern Europe   Imposing their brand, especially in Finland, Russia and the Czech Republic, Maranello steps forward as a leading firm in Northern Europe, in classes such as KF2 and KF3 that commercially speaking count, where you have about a third of the racing market involved. 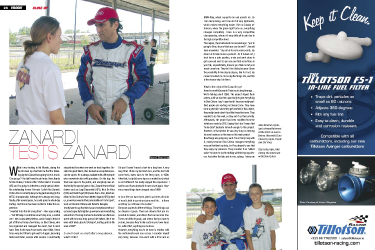 CLOSE UP – Zanardi tests Zanardi   While I was testing in Val Vibrata, during the lunch break my chief told me that the following day Alex Zanardi was going to be in Jesolo. ‘Can you go?’ He didn’t need to ask twice. 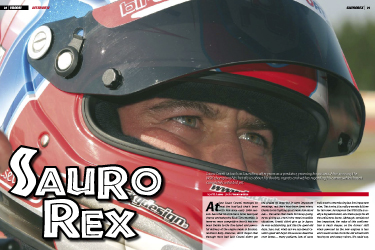 INTERVIEW – SauroRex   Sauro Cesetti is back as SauroRex, after years as a predator, yearning for success. After winning the WSK championship, he tells us about his doubts, regrets and wishes regarding his career, which hasn’t completely unfolded yet. 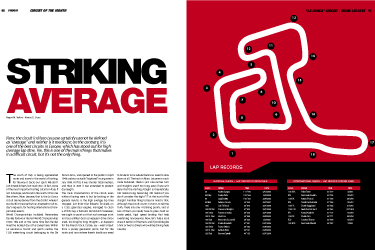 CIRCUIT OF THE MONTH – La Conca   Now, the circuit in Muro Leccese certainly cannot be defined as “average” and neither is it mediocre: on the contrary, it is one of the best circuits in Europe, which has stood out for high average lap time. Yes, this is one of the main things that makes it a difficult circuit, but it’s not the only thing. 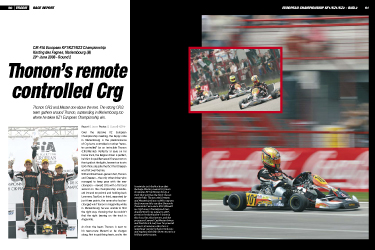 RACE REPORT – European KF1/KZ1/KZ2 Championship   Thonon CRG and Maxter one above the rest. The strong CRG team gathers around Thonon, outstanding in Mariembourg too where he takes KZ1 European Championship win.
Also, all about the European KF2/KF3 Championship Qualifications in Val Vibrata (I), Goteborg (S) and Alcaniz (E). Italian drivers and teams stand out. Out of 76 drivers holding an Italian licence, half of them managed to achieve their aim in qualifying, 17 in KF2 and 21 in KF3. 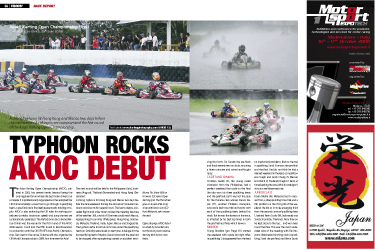 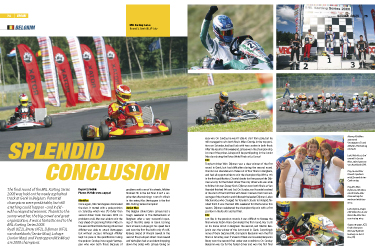 NATIONAL RACES   After 3 great rounds, the first BNL Series championship awarded the titles: a spectacular conclusion to a very successful series. Report from England tells of Mark Litchfield in top form in MSA Series KF1 class, and huge scraps in KF2 and KF3 at Rowrah. The Finnish Championships features Spirit drivers on fire in KZ2, with great fights in KF classes. The Catalonia Championship (Spain) experiences an exciting round 5, with four classes still wide open for the final round. Hungary presents Tibor Nagy as king of the last two rounds; Brazil awards the first national champions of the season; and Thailand National Championship moves to Khorat for round 3.


COLUMNS – Mondokart, Gallery, In&Out, September national racing calendars   From the UK, the Shenington Historic Revival Meeting takes you back to the golden age of karting. A spectacular event with many rare karts on and off the track. As for products news, Unipro releases the Beta version of its new PC Analyser V2, featuring new functions and graphics to analyse Unipro laptimer data. Also, the new manometer by Prisma Electronics, and the Leatt-Brace neck protector for extraordinary protection, studied for motorcyclists and applied to karters. From the racetrack, ME-Shifter F1 by Mechatron Kart makes its European Championship debut with a positive performance; Lets Go Karting hosts several celebrities at Buckmore; SK!USA is ready to rock in November at Las Vegas; Elkmann dominates the British Superkart GP; Birel makes a strong statement in July taking the top of the podium in the USA, Germany, Czech Republic and Japan!
Plus, a fantastic Gallery from Michel Petrochenko, and a selection of the most curious pictures from the paddock and the racetrack. To end with September national racing calendars, featuring over 30 events from 17 countries around the world.


CARTOON – Studying adjustments   Free practice: the competition is fast, TardyBraker is slow and decides to spy on his rivals during the break… he finds no clue, but he gets a good reception!