Author: Vroomkart International
This month, the cover is dedicated to Sauro Cesetti. At WSK Rnd.4 in Mariembourg he grabs all against a very determined Kozlinski to take first in KF1. There’s no doubt about it, a wide lead means that no one can challenge his power. Has the spell of bad luck that has been accompanying him, for some time now, at last, been broken? 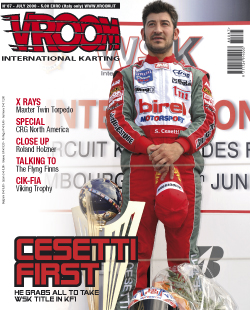 CESETTI FIRST - WSK Mariembourg Rnd.4
Cesetti – man of the day. He grabs all against a very determined Kozlinski to take first in KF1. There’s no doubt about it, a wide lead means that no one can challenge his power. Has the spell of bad luck that has been accompanying him, for some time now, at last, been broken?
Marco Ardigò makes KZ2 prefinal his, second to Jonathan Thonon at final chequered flag, who gets excluded from final results due to combustion chamber found to be non conform. KF2, Harvey puts in a brilliant performance, from row eight start, he comes through to take final win. Smarrazzo, championship point leader is just one point away. 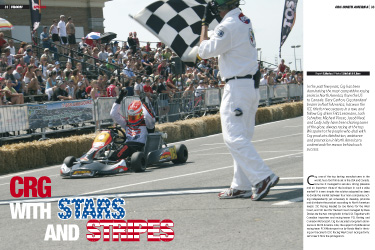 SPECIAL – Crg North America   In the past few years, Crg has been dominating the most competitive racing series in North America, from the US to Canada. Gary Carlton, Crg standard bearer in North America, has won the ICC title for two seasons in a row, and fellow Crg driver Fritz Leesmann, Josh Schreiber, Michael Vincec, Jacob Neal, and Cody Jolly have been sharing some of the glory, always racing at the top. We spoke to the people who deal with Crg products distribution, assistance and promotion in North America to understand the reason behind such success. 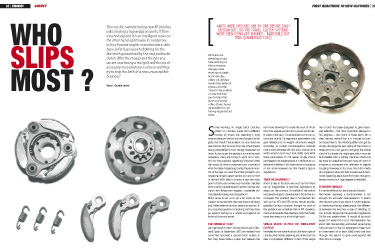 SURVERY – Clutches: Who Slips The Most?   The race for manufacturing new KF clutches risks creating a big wedge in sports. If from a technical point it is an intelligent move on the other hand, sports wise it could prove to be a boomerang for manufacturers, who have so far been used to fighting for the last tenth guaranteed by the new particular clutch. After the chassis and the tyre era, we are now facing a real gulf: will the era of accessory-manufacturers come or will they try to stop the birth of a new unsusceptible business? 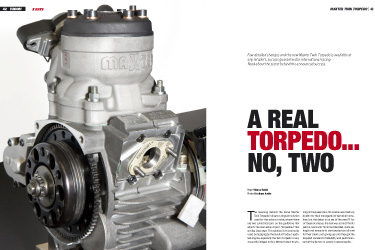 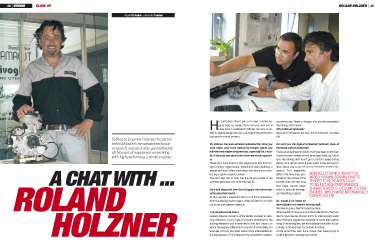 CLOSE UP – Roland Holzner   Talking to Engineer Holzner, the person behind Maxter’s remarkable technical re-launch, success is also guaranteed by all his years of experience on working with high performing 2-stroke engines. 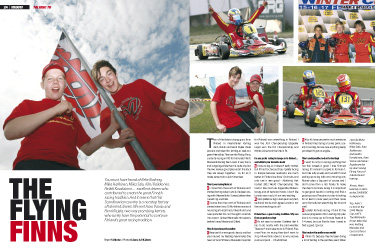 TALKING TO – The Flying Finns   You must have heard of Keke Rosberg, Mika Hakkinen, Mika Salo, Kimi Raikkonen, Heikki Kovalainen… excellent drivers who contributed to create the great Finnish racing tradition. And it seems that this Scandinavian country is a nonstop factory of talented drivers. We met Aaro Vainio and Henri Rajala, two very promising karters, who surely have the potential to continue Finland’s great racing tradition. 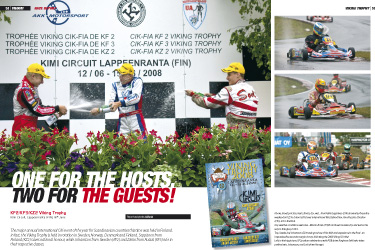 RACE REPORT – Viking Trophy   The major annual international CIK event of the year for Scandinavian countries this time was held in Finland. In fact, the Viking Trophy is held in rotation in Sweden, Norway, Denmark and Finland. Seppänen from Finland (KZ2) saves national honour, while Johansson from Sweden (KF2) and Zimin from Russia (KF3) rule in their respective classes.
Also, the second round of the Rotax Euro Challenge held in Wackersdorf (D), with Lock, Ryuya, Bourquard and Poulter winning in their respective classes after a fantastic racing weekend. 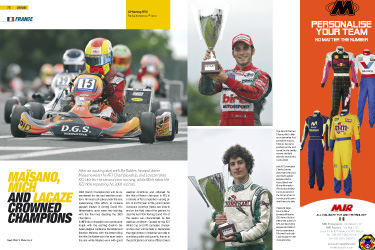 NATIONAL RACES   With the racing season well under way, we have the first champions from France in the FFSA GP, and Brazil in the Sul-brasileiro Championship. A great performance of DeLaO is worth the US Stars of Karting Race of the Americas JICA win, while Simpson claims a double win in the British MSA Super One Series. Report of the second round of the Finnish national Championship tells of another double win by Mustonen, Rask and Antilla; in Germany, Wildkart Thum takes the win in Rotax DD2. Plus reports from Denmark, Portugal national Championship, and the ever-growing Thai Super Kart Championship. 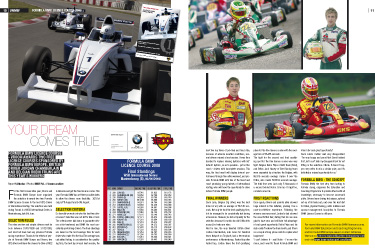 COLUMNS – Mondokart, Technical Queries, August racing calendars   Starting with the 3rd edition of Vroom drivers selection to award two free Formula BMW Licence Courses, Mondokart is full of latest news from around the world. A presentation of AMV future projects; Wildkart and Alpha Karting new catalogues; 2009 World Champs to be held on the Chinese track in Macau; a special lap at the Euro Challenge; news from the upcoming 2008 PRI Trade Show; 2008 Rock Island GP update; 24h endurance race in Mexico; the super Open RACC in Spain; Wildkart Canada Racing Team and First top performances in North America. And last but not least, we interviewed Vamec owner Vincenzo Vannini and Tillotson Engineering Manager John Mason on “Special” Carburetors.
Plus, our top Engineer Marco Natoli answers all your questions in the Technical Queries sections. Ending with August national racing calendars, including over 40 events from 22 countries around the world.

CARTOON – Fully absorbed   Tardy Braker goes over the circuit while on starting grid, but he concentrates too hard, and you can only guess what happens…