For the third consecutive year, Vroom and Formula BMW Europe have organized the selection to award two free Formula BMW Licence Couses to the best KF2 drivers of international karting. The selection was held during Round 4 of WSK International Series in Mariembourg, last 8th June.

SELECTION RULES
The rules are few and simple: drivers must be born between 01/01/1990 and 31/12/1993, and must not have had any previous Formula racing experience. Thanks to the efforts of people at Formula BMW Europe and Vroom, two KF2 drivers will have the chance to drive a FB02 in Valencia and get the free licence course. This year Formula BMW has set three possible dates to allow the drivers more flexibility:  30/31st July, 6/7th August and 8-9th August.

SELECTION CRITERIA
So how did we work out who the best two drivers were? Selection was not left to fate or luck. The criteria were laid down to guarantee drivers a fair treatment, and BMW the most consistently performing drivers. The final standings are based on the best average time for each driver who made it to the final. The average was calculated taking in consideration the qualifying time, the best lap of each heat session, the best five lap times of pre-final and final. Also, because of adverse weather conditions, several drivers missed a heat session. It was then decided to replace missing laptimes with 58” default laptime, so as to penalize - yet not too much - drivers with incomplete sessions. This way, the final result display drivers’ performance through the entire weekend, and provide Formula BMW with two of the finest and most promising young talents of international karting, who will have the opportunity to shine before Formula BMW people.

FINAL WINNERS
Sami Luka, Belgian Crg driver, was the best driver of all, with an average of 56.745 seconds. However, he did not qualify for the selection because 6 months too old! Difficult to accept, but rules are rules.
Next in line, the talented British driver Jordan Chamberlain, on Tonykart, takes the first qualifying place for the free licence course with the average time of 56.856 seconds. The fight for the second and final qualifying spot was very tight. Belgian Robin Frijns and Briton Jack Harvey were separated by a fraction: the Belgian, with 56.916 seconds average makes it over the Briton, who marks 59.9163 seconds average. The total time sees Jack only 5 thousands of a second behind Robin. 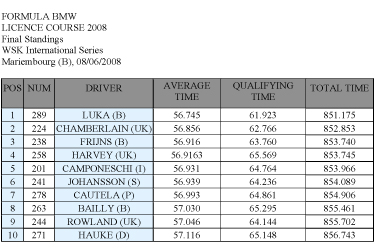