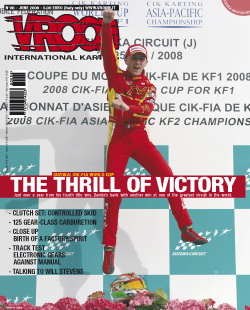 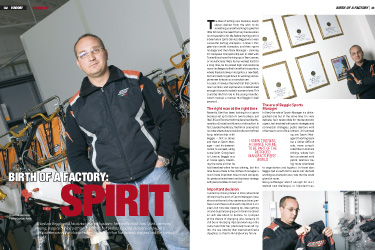 BIRTH OF A FACTORY: SPIRIT   Gianluca Beggio and his contagious enthusiasm: here we find out how Spirit came into being; reasons behind particular difficult, but perhaps, sound decisions and what’s behind the scene that characterises this factory that has recently stepped into the karting world. 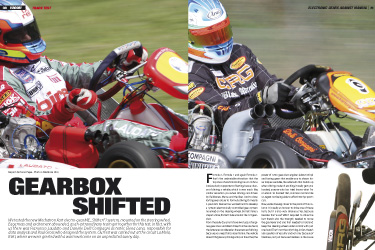 TRACK TEST - Electronic Gears vs Manual   We tested the new Mechatron Kart electro-gear ME_Shifter F1 system, mounted on the steering wheel. Eagerness and excitement abounded, as an extraordinary team got together for this test, in fact, with us there was Francesco Laudato and Daniele Delli Compagni as tester, Elena Lana, responsible for data analysis and Paul Gross who designed the system. Our test was carried out at the circuit in Mola, Rieti, where we were greeted with a warm welcome on an unpredicted sunny day. 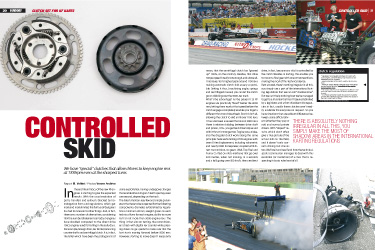 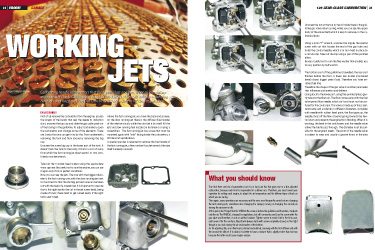 125 GEAR-CLASS CARBURETION - Working Jets   Calibrating needle carburettors that feed gear-class engines, is not so immediate as one might think. Carburetion depends on a series of factors, among which you have jets and nozzles of the Dell’Orto VHSH30 according to KZ class regulations. 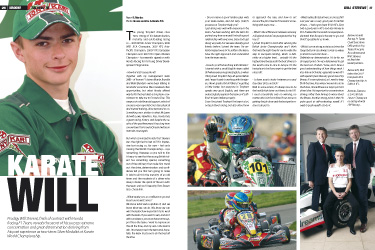 TALKING TO - Will Stevens   Prodigy Will Stevens, fresh of contract with Honda Racing F1 Team, reveals the secret of his success: extreme concentration and great determination deriving from his past experience as two-times Silver Medalist at Karate World Championship. 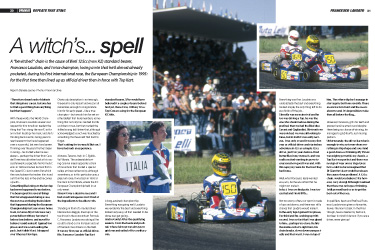 DEFEATS THAT STING - A witch’s... spell   A “bewitched” chain is the cause of Birel 125cc (now KZ) standard bearer, Francesco Laudato, and twice champion, losing a win that he’d almost already pocketed, during his first international race, the European Championship in 1995: for the first time then lined up as official driver then in force with Top Kart. 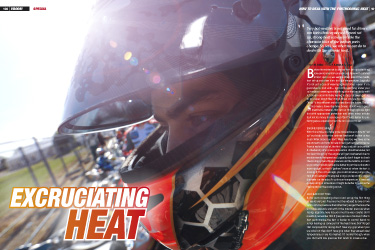 SPECIAL - How to deal with the forthcoming heat   Very hot weather is not good for drivers nor karts that require a different set up, strong heat can even make the characteristics of the various parts change. So, let’s see what we can do to deal with the summer heat. 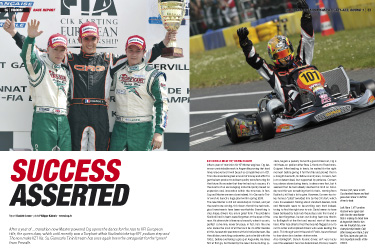 RACE REPORT – European Championship Rnd.1, WSK Rnd.3, MEKC Rnd.3   After a year of transition, now Maxter powered Crg opens the dance for the race to KF1 European title, the queen class, which until recently was a Tonykart affair. Kozlinski take top KF1 podium step and Thonon make KZ1 his. So, Giancarlo Tinini’s team has once again been the antagonist for the “green” from Prevalle.
In the WSK, winning three heats out of three, Brandon Maisano is the driver to beat on Saturday. Then along came a perfect race, and Maisano had to shoot in an open goal. Perfect, ten ad laudem. Now he tops the championship.
Last but not least, MEKC series finale! If you think Austrian driver Kevin Reichard had an easy time becoming the first Middle East Karting Cup champion, you should have spoken to him. Well, we did! 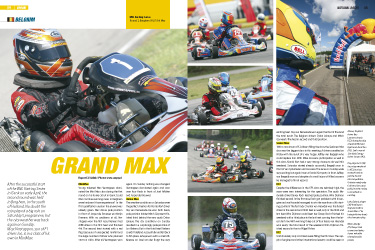 NATIONAL RACES    May racing calendar has been very busy, and so have we, getting all reports of the major national series from across the globe. US Stars of Karting opened up in Ocala (FL) with the East Zone Rnd.1-2, as well as the West Zone, held in Toele (Utah). All major English series are in full sway: here we have BRDC Stars of Tomorrow Rnd.1, and Super One TKM series Rnd.2-3. Finnish season got underway with KF/KZ classes; Czech Republic featured Rotax for the first time ever; while Denmark celebrated Michelle Gatting domination in KF3. French top series FFSA GP, and Benelux newly established BNL Series are taking shape with strong leaders. Plus Japan, Thailand and Hong Kong provided great racing despite fewer entries than expected.


COLUMNS – Mondokart, July racing calendars    Racing news from Spain, with Spirit drivers success in KF3 and KZ2 in the first round of the Campionato de Espana in Alcaniz; from Germany, with Energy drivers on top in KF2; and Round 2 of CIK-FIA Superkart Championship at Lausitzring (D). Plus the Euro Challenge promoting the Manufacturers Cup trophy; Stars of Karting big hit at Indianapolis 500; UK Racing Steps Foundation; New Zealand’s Hart signing on with Intrepid Force Rotax team; and July national racing calendars with over 30 dates from 21 countries around the world.