Author: Vroomkart International
As anticipated, the October issue takes a deep look at the spectacular racing of the protagonists of an intense last part of the season. 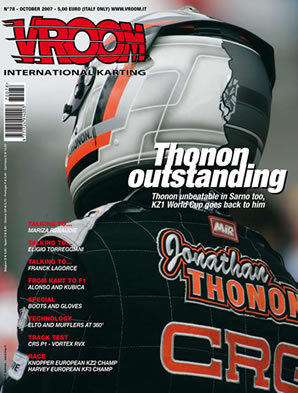 Thonon unbeatable in KZ1. In Sarno also two continental titles assigned
As anticipated, the October issue takes a deep look at the spectacular racing of the protagonists of an intense last part of the season. KZ1 World Cup, dominated once again by Crg/Maxter factory driver Jonathan Thonon from Belgium by keeping at bay his main rival Marco Ardigò, who missed the opportunity to stand right next to Rossi and Foré and the few others (very few) who managed to win the world title in both direct-drive and gearbox classes in the same year. A full 14-page special on this event, which also saw the European KZ2 and KF3 titles assigned respectively to the Dutch driver Knopper (Pcr/Tm) and to the Brit Harvey (Maranello/Xtr).

From Kart to F1 – Second appointment with the famous karters who lived up to expectations and made it to the top of motorsport, Formula 1. Fernando Alonso and Robert Kubica demonstrated their full talent already in karting. Of course we could have never thought they would become flagship of their respective country. Thanks to Alonso, Spanish karting movement has been shaken to a level that the future is likely to be bright, while Kubica is the first-ever Polish driver to race in F1.

Mariza re-launches Swiss Hutless – Close-up with Mariza Renaudie, who talks about the projects for next season at Swiss Hutless after the debacle at the beginning of the year, following the divergences between Nicola De Cola, former racing department manager, and Jurgen Leibinn, new managing directore

The interview of the month – Franck Lagorce, the captain of the Equipe de France, explains his role in the French Federation. A successful karter, Formula Renault and F3 driver, he made it to the top in F1 with the Ligier F1 team...no wonder why we call him The Right Man.

Technology – Elto and mufflers at 360° ?The muffler might seem a component without parts in motion, yet it requires high technology manufacturing process, a defined choice of materials, an in-depth study of geometries and fluids dynamics. Eligio Torreggiani’s Elto is one of the most important muffler manufacturers for 2-stroke engines, particularly for karting.

Races - Besides the event in Sarno, this issue features the national race reports from around the world. The Rock Island GP and Snap-on Stars East Division final from the USA, the BRDC, Rotax and MSA Series from the UK, plus the national championships from Hungary, Brazil, Denmark and Japan.

International Column - And there’s much more. You find the 2008 CIK calendar and the main international events in October and November. Plus latest news and previews from the world on the Mondokart section.

The Cartoon: Bad influence – Just like icing on the cake, the exhilarating stories of the “Sacra Biella” team. This time Tardy Braker is protagonist, teaching Zig Zag’s nephew on driving techniques. And the tiny driver learns the lesson very quickly... “Brakes are for cowards!”