Marco Ardigò and Davide Forè on front row fighting for the prefinal win. The longed for duel didn’t come because mechanical problems force Tony’s number 1 driver to take an early exit. After lots of attacks and place swapping Catt takes over the lead with Cesetti and Parrot on his tail. The three cross the finish almost aligned, while a couple of seconds separate Stevens, Forè and Toman. Piccioni, Laine and Ishii duel to the very end, only a few tenths separate them at the chequers. Disappointment for the other two Italian drivers on the field, Giacomello (Zanardi/Parilla) and Bressan (Kosmic/Vortex) who didn’t end the race, the first retired after two laps and the latter only concluded one lap. 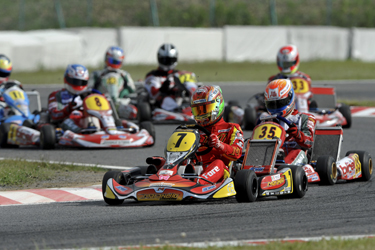 A 10” penalty puts Catt on row five start. Cesetti, Parrot, Stevens and Foré line up on front grids. Parrot storms off to lead, but Catt is fantastic, up from ninth to third in no time. Cesetti and Foré keep a watchful eye on each other as Ardigò follows further back in the field. Parrot is unable to hold back Foré, Toman, Cesetti and Laine. At this point Forè’s determination is outstanding. Maranello standard-bearer robs lead from Catt taking Toman and Cesetti up with him. Places remain basically the same; more excitement as Laine drops three places to Bressan, Ardigò and Parrot – who later gets eaten by the Finn three laps from flag.  Stevens slowly drops places ending tenth behind Ishii. Cesetti stopped best lap both in prefinal and final. More was expected of Piccioni who retired after the first lap and Giacomelli who didn’t finish the race. He was out on the penultimate lap. 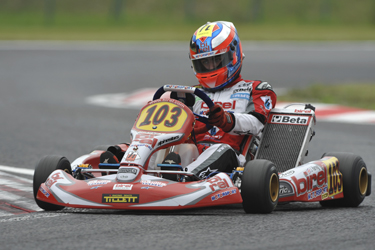 KF2 is less exciting considering announced win on behalf of Britain’s Harvey (Birel/Parilla) and Birel super power throughout the weekend. Intermediate results see Italian Patrono together with Harvey and Japanese Otani and Katsuta, all on Birel, leading the scoreboard. Matteo Viganò (Birel/Parilla) and the Finn Suvanto (Tonykart/Vortex) come through repechage for the final stages. Harvey and Patrono are brilliant in prefinal, with the latter taking over the lead from his team mate for 5 laps, after which he’s forced to retire. Harvey pulls away; behind him Camponeschi gets the better of Otani, a very determined Basz, and Giaguaro Nero – all within 1”. The final is quite straightforward, more excitement from mid-field. Harvey storms to win after swapping the lead with Camponeschi who maintains second place to lap 9, when Yamashita, Katsuta and Giaguaro Nero attack him; lots of excitement during the final laps, as Camponeschi in second suffers the attacks of Katsuta in the last lap... the two touch and Patrono and Giaguaro Nero take advantage of the situation cutting through to grab flag 2nd and 3rd with just 0.045” separating them. 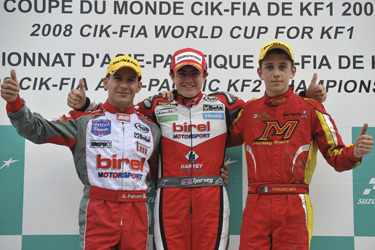