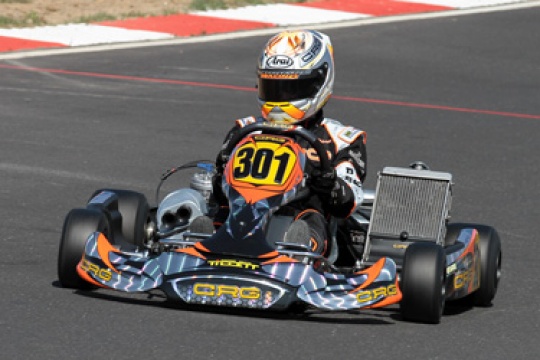 In the british event, a crash denies Verstappen the podium. He qualifies anyway for the European Final of Zuera. All qualified the other CRG official drivers. Also the japanese Jinya Yamakawa – who has recently joined the team – grabs the qualification.


CRG Official Team missed the podium, but this is the only stain in an otherwise spotless performance. A podium could have given the team full satisfaction for the result of the first 2011 international event of the CIK-FIA Championships, in the two qualifying races of the KF2 and KF3 European Championships. The two races took place last 1st May on the international circuit of Brandon in England (for North-Eastern Europe) and on the Jean Brun circuit of Varennes sur Allier in France (for South-Western Europe).

The result of the qualification was fully achieved by the CRG drivers running on the British circuit, even though this time they could not rejoice for getting on one of the steps of the podium: it would have been a good way to put a final seal on the good results obtained in the race.


Most of the disappointment comes from the result of the KF3 final, with Max Verstappen (in the picture) who had been regarded as the driver to beat throughout the whole weekend. He had left five hundredths of a second to the English Russel only in the time trials; then, in the qualifying heats, the Dutch driver was simply – and as usual – unbeatable on his CRG, winning all the four qualifying heats. Eventually, in the final, he took an early lead starting from the pole position, but in the last laps he was reached by his pursuers. There was an awesome tussle for the victory, with frequent changes at the lead of the race. With few curves to go, Verstappen, who was third at the moment, in an attempt to regain at least the runner-up position, tried to overtake the English Scott who “shut the door” on his face. The two collided, putting an end to their race. So, it was the Norwegian Dennis Olsen who won the race.

Despite this unfortunate episode, Max Verstappen qualified for the European Championship final, due next 24th July in Zuera.


In KF3, the young Japanese driver Jinya Yamakawa made himself conspicuous. It was his first time on CRG-Maxter and he placed 20th in the final, after getting good results in the qualifying heats and the best time in the time trials in his group. In KF3, also the other CRG young Dutch driver, Max Koebelt, qualified. He placed eighth in the aggregate ranking of the two B-finals.

In the KF2, very good performances for the CRG chassis and the Maxter engine used by the Danish driver Michelle Gatting, ninth in the final after being obliged to recover many positions in all the heats because she did not manage to get a good time in the time trials. It was the English Tom Joyner who won the race.


In the French race, which was run in  Varennes sur Allier at the same time of the British one, among the participants for the CRG private teams, Nicolas Gonzales qualified in KF2 (excellent eighth place in the final after a recovery from the 20th position), together with Giovanni Martinez, classified 12th thanks to the B-finals aggregate result. The winners of the two categories were the French Enzo Guibbert in KF2 and the Spanish  Alex Palou Montalbo in KF3.