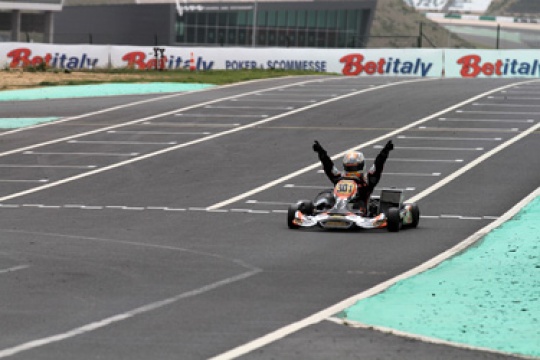 Good results also for Lennox in KF1 and for Michelle Gatting in KF2. Thonon obliged to retire in KZ1 after winning the saturday final. Torsellini stopped by a crash in KZ2

In the picture, Max Verstappen arrives first on the finishing line. Below, the Dutch driver on the KF3 podium.


Portimao (Portugal). It was an eventful and rich of technical indications weekend for CRG. In Portugal, for the second event of the WSK Euro Series season on the international circuit Algarve (Portimao), CRG got good responses to the technical evolution carried out on the CRG chassis and to the competitiveness of the Maxter engine, especially regarding the KZ1 and KF1 categories. It was right in these two categories that the Italian constructor got satisfactory results with the podium of Arnaud Kozlinski in KZ1 and of Felipe Fraga in KZ2, besides the good result of Jordon Lennox-Lamb in KF1. 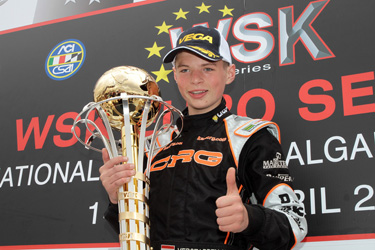 In KF3 there was the good success obtained by Max Verstappen, whose leadership in the category was confirmed in this Portuguese weekend: he is now definitely launched towards his second success in the championship.
CRG’s “booty” (three podiums) could have been even richer if a technical trouble (uneven wear of tyres) wouldn’t have stopped the race of Jonathan Thonon in KZ1- winner of the first final on Saturday in KZ2 – and if Mirko Torsellini woudn’t have got involved in an accident in the Sunday KZ2 final, while leading the ranking of his category.
The result obtained by Kozlinski, excellent runner up in the Sunday final after placing fourth in the Saturday final 1, was the deserved reward for the good work carried out on the Maxter engine, set up directly by the Italian constructor. Obviously, without Thonon retirement the overall result for CRG would have been much better. Also David Fore’ had to make the best of his 11th place, a result greatly due to a wrong set-up choice. 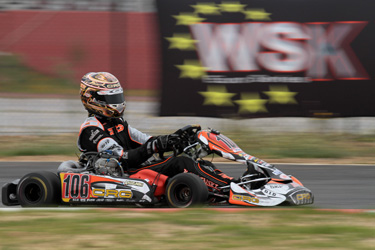 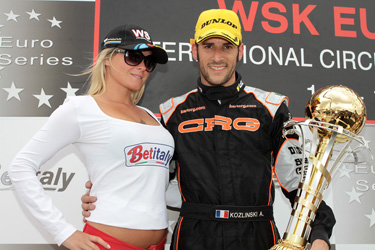 Good performance for the Brazilian Felipe Fraga. He was at his first experience in an European race but despite that he managed to be the runner up in his category, the KZ2. On the other hand, in this category, it was Mirko Torsellini who missed the win. He was stopped by an accident with Jorrit Pex – always on CRG - while occupying the first place in the KZ2 drivers ranking.
In KF1 the best performance for CRG was obtained by the English driver Jordon Lennox-Lamb, seventh after running a good final. Interesting performance also for Andrea Dalè, but he was victim of several misfortunes throughout the whole weekend and ended 22nd before a convincing and skilled Laura Tillet. The Finnish Mathias Koykka was slowed down by an accident, while it was a technical trouble which stopped Felice Tiene, absolutely unlucky in this Portuguese event of the WSK. 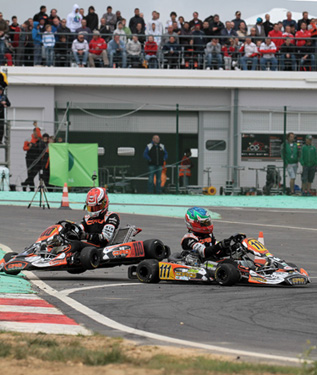 The crash between Torsellini and Pex KZ1-KZ2 final of Portimao.


In KF2, Michelle Gatting did her best in the final for CRG, but despite her talent she was involved in the start tussle and couldn’t get anything better than a 12th place, even though she confirmed once more to be one of the best drivers in this category.
Max Verstappen, on the other hand, did not miss the appointment with the win. Always competitive in every occasion, he was even obliged to recover in all the heats because one of his heats did not go well for him. Verstappen showed all his talent especially in the final phase: he won the pre-final and then in KF3 dominated the final, with his rivals all kept well far away from him.
In KF3 Max Koebelt behaved quite well, improving decidedly his performance.


-THE INTERVIEWS-
Giancarlo Tinini, CRG SpA chairman: “We have taken a step forward in KF1, but there is still something missing. Anyway, we have gathered important elements for the future. In KZ1 Kozlinski went well with the engine developed directly by the constructor. There some disappointment for Thonon who had some technical troubles with his chain ring when he was among the top drivers, and anyway he achieved the fastest lap. The same can be said for Mirko Torsellini, stopped by an accident, who achieved the overall fifth fastest lap. In KZ2 the Brazilian Fraga behaved well and he was at his first experience in the WSK. In KF2 Gatting was fast throughout the whole weekend: it’s a pity she didn’t manage to gather what she deserved. If we will be able to make progress in KF1 she will enjoy it and her performance will improve. In KF3 Verstappen was excellent and also Koebelt did well.”


Arnaud Kozlinski (KZ1): “The work we did on the engine for the Winter Cup and that we kept on doing during the first event of the WSK Euro Series of Sarno has given us its first positive feedbacks. We can still improve, but for the time being a podium gives the team the strength to keep on working.”


Jonathan Thonon (KZ1): “Since the beginning of the final I was hindered by a technical trouble with my chain ring. Without that problem I would have won: I was constantly the fastest and mine is the best lap.”

Jordon Lennox Lamb (KF1): “I did a good race, I’m satisfied. With a new set of tyres, in the final, I had a really good pace. Now I hope my engine can have a further development, so I will be able to compete for the win.”


Max Verstappen (KF3): “I do thank my team for their excellent job. At the beginning of the weekend I wasn’t so fast, but I kept on improving and I managed to get very far in the event. Now I have a good lead in the championship. I’m really glad.”


All the results on www.wskarting.com