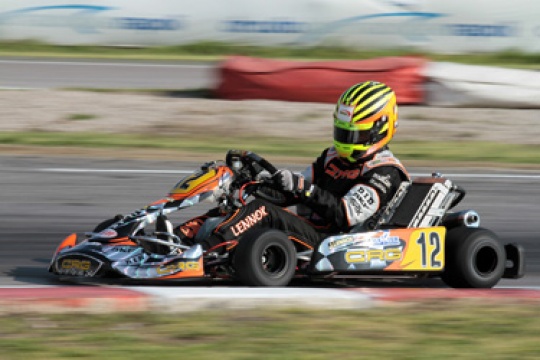 CRG goes to Portugal with new ambitions and aiming to a full sucess in the WSK Euro Series in all the categories. The further developments of the Maxter engine in KF1 were rather satisfactory.
Lonato del Garda (Brescia - Italy). After a month break, the great International karting comes back with the second event of the WSK Euro Series, in schedule from 14th to 17th April on the International Circuit of Algarve, on the breathtaking track set in southern Portugal, venue of one of the events of the WSK for the second year in a row.

Left, Jordon Lennox in KF1 in action in the last race of the WSK Euro Series of Sarno.

CRG-Maxter official team fields its best drivers and equipment on this occasion too, aiming to achieve great performances and confirm its leadership in all the categories in an event with more than 220 drivers coming from all over the world. Just few days ago, Felice Tiene and Jordon Lennox-Lamb, both CRG’s drivers, gave the kart a series of rather satisfactory tests on the International Circuit Sarno. The session was meant to test the recent development of the Maxter KF1 engine.
And it is right the KF1 category which will be the focus of everybody’s attention, given that the Portuguese WSK event , besides being very important for the championship ranking, represents another occasion to test the karts before the CIK-FIA world championship which is due to start on 12th June in Wackersdorf (Germany). The opening race of the championship was postponed after the Japanese event was put off to 13th November.

In Portugal, in KF1, the CRG-Maxter official team has in its ranks five determined drivers ready to battle on the track: besides Felice Tiene and Jordon Lennox Lamb, there will be also Laura Tillett, Andrea Dalè and Mathias Koykka. 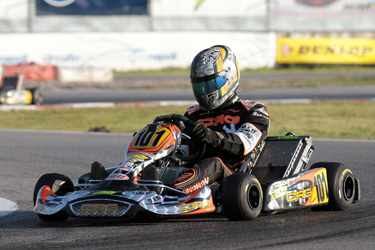 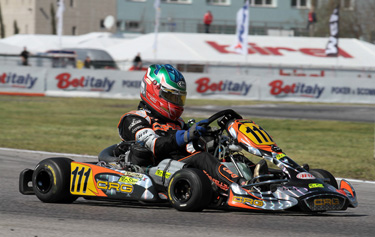 The Portuguese round it is crucial for CRG in the KZ1 and KZ2 categories too. In KZ1 the category champion Jonathan Thonon has to redeem himself after the delusion of the second final of Sarno, while Arnaud Kozlinski has the chance to confirm the progress of the development of the Maxter engine set up directly by the Italian factory. In KZ1 there will be Davide Forè too, after his podium in the first event of Sarno, as well as in KZ2 the young Mirko Torsellini will be able to confirm his talent and attempt to climb up the ranking – he is second at the moment. In Portugal, with the CRG-Maxter official team, in KZ2 there will be also the Brasilian driver Felippe Fraga, while Jorrit Pex will be racing for CRG Holland and the Spanish Alvaro Gomez Rubiera with the Jamkart Tenerife Team.

In KF2 among the protagonists of CRG there will be the quick Danish driver Michelle Gatting and the Russian Ivan Nikitchenko. For the CRG Junior Team there will be the two Belgian Correntino Gilson and Julien Lefort, besides the Spanish Diego Martinez De Luca for the Jamkart Team from Tenerife. 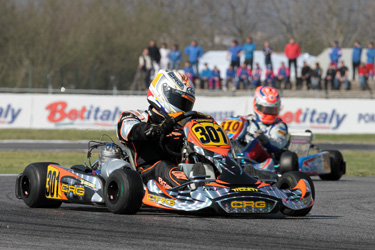 
In KF3 the protagonist is still Max Verstappen, reigning world champion of the category, who wants to forget his unlucky performance on the wet track of Sarno. Anyway, he is third in the general ranking, just five points behind the first two; for sure in Portimao he will have the chance to go back on top of the ranking. Together with Verstappen, there will be another Dutch driver: Max Koebolt, who has already taken several steps forward. Another driver running for the colours of CRG is the Japanese Jinya Yamakawa, besides the young Dutch Stan Pex for CRG Holland and the Belgian Max Defourny for the CRG Junior Team.

All the results and the programme details on www.wskarting.com