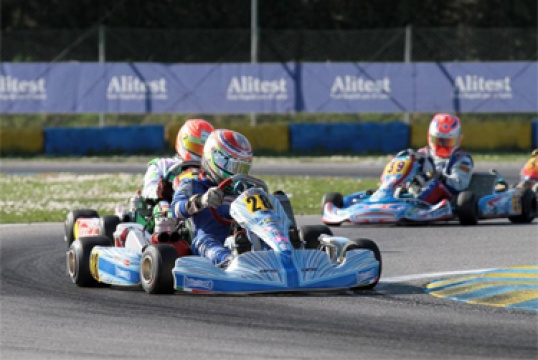 With the record number of 33 countries represented, the 22nd edtion of the Andrea Margutti Trophy took place at 7 Laghi Circuit. The trophy is run in memory of Andrea Margutti, the young kart driver tragically deceased in 1989. The winners were all foreign drivers in the 4 categories of the event.


Castelletto di Branduzzo (Pavia - Italy), 20th March 2011. Once again the Andrea Margutti Trophy ended with a series of awesome finals and, as usual, the event – part of the CIK-FIA calendar – was gripping and full of interesting aspects, both from a technical and a sports point of view. For this 22nd edition too, the promoter Parma Karting and the Margutti family were fully rewarded by the excellent results achieved by the event, which enjoyed the participation of 213 drivers and a record number of countries represented: 33. The races were all spectacular and gripping, with some surprises in the finals. The race will be aired on Nuvolari, Sportitalia, Rai Sport, Odeon and other TV networks.

For the third year in a row, the race took place on the 7 Laghi Circuit of Castelletto di Branduzzo (Pavia – Italy), continuing the tradition of an event created in memory of the young Andrea Margutti, who died in 1989, and enriching the honours ever since.
The four categories, with some unexpected results after what happened in the trials and in the qualifying heats, were all won by foreign drivers: the Czech Adam Janous (Intrepid-Tm) in KZ2, then the Swiss Alain Valente (Swiss Hutless-Bmb) in KF2, the Danish Slavco Ivanovic (Tony Kart-Vortex) in KF3 and the Rumanian Marco Dionisios (Top Kart-Lke) in the 60 Mini.

In KZ2, the Czech Adam Janous had already made himself conspicuous in the qualifying heats, winning one of the races; anyway, he could perform at his best in the final after being the runner-up in the pre-final. On this occasion it was the Dutch Beitske Visser (Intrepid-Tm) who missed the win. She had troubles with her brakes in the last Sunday morning heat, then she was obliged to make a big recovery until sixth place in the final. Anyway, two Italians managed to step onto the podium: Massimo Aceto (Crg-Tm) and Alberto Cavalieri (Intrepid-Pavesi), as usual great performers in this category and always among the top drivers.

In KF2 everybody thought Brandon Maisano would walk it. He is the Italian champion of the Formula ACI CSAI Abarth 2010 and was back on a kart to try to repeat in KF2 his 2009 success. But the French driver on Intrepid-Tm, after winning the pre-final and after taking an early lead in the final, was slowed down by technical troubles and had to settle for the fourth position. So, it was the Swiss Alain Valente (Swiss Hutless-Bmb) who won; the runner-up was his fellow countryman Pascal Eberle, third the Russian Ivan Kostyukov, both on Tony Kart-Vortex. The Belgian Yannic De Brabander (Parolin-Tm) was obliged to retire after being second behind Maisano.

In KF3 it was the Danish Slavco Ivanovic (in the picture above) on Tony Kart-Vortex who confirmed to be the fastest and one of the top drivers in the final too. One of the few drivers who seemed to be able to challenge the Danish was the French 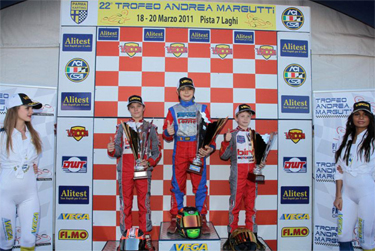 Esteban Ocon (FA Kart-Vortex), excellent in the qualifying heats but then fourth in the final. On the podium, right behind Ivanovic, the Swedish Robin Hansson (Energy-Tm) and the English Harrison Scott (Intrepid-Tm). Kevin Lavelli (Top Kart-Comer), who started from the front row, was obliged to retire after a crash.

In the 60 Mini, the Rumanian Marcu Dionisios (Top Kart-Lke) played a major role in the final too, winning the last race arriving before the two Russian drivers Alexander Zhirkov (Birel-Bmb) and Robert Shwartzman, the latter also on Birel but powered by Lke.
During the drivers’ presentation, in the flurry of flags of the 33 countries of the drivers participating in this 22nd edition of the Andrea Margutti Trophy, a minute’s silence was dedicated to the victims of Japan’s earthquake. Together with the Margutti family, the Trophy enjoyed the presence of the CSAI Vice President Bruno Longoni, CSAI sub-commission President Vittorio Loriga and Mrs Alessandra De Vito, besides the member Paola Acerbi.

Highlights of the 22nd Andrea Margutti Trophy will be broadcast on TV from 27th March, with reruns until 3rd April on the satellite and DTT channel Nuvolari, besides Sportitalia, Rai Sport, Odeon and other important national networks for the programme weekend racing by Aci Sport.
Andrea Bertolini, FIA GT world champion on Maserati and test driver for Ferrari – and who can boast a great career in karting -, endorsed the 22nd Andrea Margutti Trophy.
All the results on www.trofeomargutti.com