In what will likely be the biggest meeting of the year in terms of numbers, the 2011 Victorian Sprint Kart Championships were held at the Go-Kart Club of Victoria, Port Melbourne on the 11th-13th of March. The event can only be described as a demolition by Arrow drivers, with Australia’s premier Kart again leading the way with 11 State Championships wins out of a possible sixteen, with only one other brand scoring more than one victory.

Newly recruited Arrow driver Brendan Nelson started 2011 on a high by completing a double victory in the premier Clubman Heavy class as well as Rotax Heavy. The Queenslander placed his Arrow X1-30 on the front row of the grid in Clubman Heavy and shared the heat wins with fellow Arrow driver Zeke Edwards. At the start of the final, Nelson got the jump heading into turn one and lead the field around for the first lap. Pole Sitter Zeke Edwards and Lee Mitchener crashed out of the race on lap two, handing Nelson a five kart length lead that he never relinquished. Finishing second was ten times Australian Champion Matthew Wall, with Richard Muscat finishing a creditable fourth after fighting for the podium throughout the 20 lap race.
Nelson took his second State Championship of the weekend aboard Arrow’s latest chassis the X1-E in Rotax Heavy over fellow X1-E compatriot Zeke Edwards who rounded out the podium in third.
Providing Arrow with two more victories was David Sera who won Rotax Light and Leopard Light. In Rotax Light, Sera led home an Arrow X1-E trifecta with Luke Rochford and Brad Jenner finishing in second and third respectively to maintain Arrow’s dominance in the category over recent years.
Leopard Light proved to be a one act affair in the final with the factory Arrow driver dominating proceedings from the beginning to open up a three second lead at the chequered flag to claim his fortieth state championship of his career.
Matthew Wall collected his second podium for the day, this time going one better to claim victory in the high performance Leopard Heavy class. The ten times Australian Champion was too powerful over the 20 lap final, eventually finishing over two seconds clear of his nearest competitor. Shane Price charged his way through the field to claim fourth place after not finishing the pre final, with Arrow driver Daniel Stein on his bumper in fifth.

Joseph Mawson took off from where he did last year winning Junior Max and Junior Clubman. The 14 year old New South Welshmen had to chase down race leader Liam Morey before the two of them went to battle over the closing stages. Both drivers shared the lead at different times in the last few laps but Mawson held on for victory by a slender margin to claim his 11th State Championship.
The same two drivers led the way in Junior Clubman with Mawson once again prevailing over Morey. The reigning Australian Champion in the class sent an ominous warning to his competitors in the lead up to the Australian Titles held in Perth next month. Morey returned to the Junior Clubman class after a year on the sidelines, and shadowed Mawson throughout the heat races before eventually settling for second position. Recent KF3 graduate Anthony Martin made a late race charge on Arrow driver Todd Hazelwood to finish in third place with Hazelwood in fourth.
Nicholas Ellen (right) was victorious in Senior National Light and Senior National Heavy to claim his first two State Championships of his career. Having been on the podium on numerous occasions throughout 2010, Ellen finally went one better as he led home Jarryd Ebzery in Senior Light with former National Champion Darsey Kondopirakis fourth ahead of recent Senior graduate Thomas Allen in fifth.
Ellen had an easier time in the final of Senior National Heavy opening up a clear advantage early in the race to cruise to victory to score his second blue plate of the afternoon.
In one of the closet races in Victorian Open history Liam McLellan (below) outgunned his more experienced rivals to score victory in Junior National Light by a mere 0.006 of a second. The young Melbournian produced some daring moves over the final laps to score his second State Championship in Junior National Light since graduating from Rookies last November. Fellow Arrow Drivers Jake Klein and Luke Marquis finished third and fourth respectively after leading the race at different times. All of the Arrow Junior drivers showed maturity well beyond their years and showcased the talent coming the ranks in coming years.

Todd Hazelwood got the jump at the start of the Junior National Heavy final, and by the halfway point established a handy lead over Arrow pilot Matthew McLellan. With three laps to go, the hard charger was Anton DePasquale (right) who overcame his ninth starting position to find a way past McLellan and set upon chasing down Hazelwood. At the start of the final lap, Hazelwood still maintained a three kart length lead but with DePasquale fighting hard, he made a bold move and passed Hazelwood at the double right hander and kept that to the greet the chequered flag first.
Arrow Racing Drivers greeted the podium on many more occasions throughout the meeting with Thomas Bennett, Chase Wooley and Dylan Hollis finishing second, third, and fourth in the Midgets category after all leading the class at different times throughout the weekend.
The Rookies podium was well represented with Thomas Schou leading the way for Arrow finishing second to go along with his win in last year’s Victorian Open in Midgets. Third place was taken by Nikola Mitic with New South Wales State Champion Jayden Ojeda in fourth. The hard luck story of the weekend was Rhys Wooley who encountered engine issues while leading the final aboard his Arrow kart.
Other Arrow drivers to score podiums at the meeting were Nathan Van Hulst (Clubman Super Heavy), Chris Sanderson (Clubman Over 40’s), David Sera and Mitchell Wilmot (Clubman Light).
Overall it was a hugely successful event for Arrow Racing Karts. Winning 11 of the 16 classes confirms Arrow position as the benchmark in Australian karting at every level.
Arrow Racing Karts would like to thank all who contributed to the fantastic results and express our gratitude and appreciation to all who continue to support our products. For more information about Arrow Karts and dealer contact details please visit our website at www.arrowkarts.com 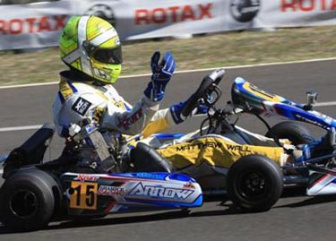