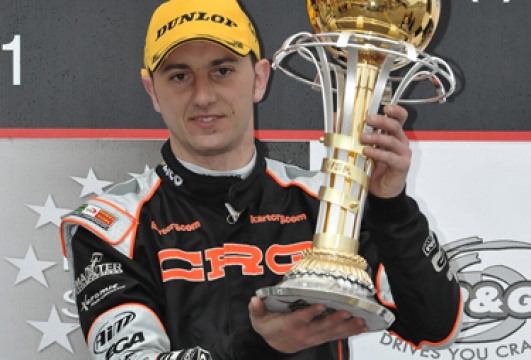 Rarely had an international race gathered such an amazing group of participants. First of all in terms of quantity, with almost 250 entered drivers, but far and foremost in terms of qualify. There were a countless number of World and European champions at this first round of 2011 WSK Euro Series in Sarno.


In this very stimulating context for karting, CRG chassis and Maxter engines led CRG Racing Team drivers to the top. Jonathan Thonon won a particularly important final race preceding the world elite. Mirko Torsellini did likewise in KZ2. As for Max Verstappen, the driver who races for CRG in KF3, he continued to extend his list of podiums: already three in as many races since the start of the season.
"With its 1,700 m, its long straight stretches and its varied bends, the Sarno circuit puts equipment to hard test. It is one of the places where we wanted to win to show all the qualities of our karts, and now it's a done deal! And when we think of the amazing level of this meeting, it is even more rewarding. What is more, our CRG chassis won in the dry on Saturday with Thonon and Max Verstappen made it to podium in the rain on Sunday. It's a very good omen for the continuation of the season, and we are not going to let up!" This is how CRG team commented the night of the race.

KZ: 1 Final, 2 Victories
On Saturday, Jonathan Thonon was magnificent in KZ1: pole position, winner of his two heats and then of the final with best lap time in all three races! It was definitely a brilliant performance for the Belgian driver and his CRG-Maxter/Tec Sav kart. Thanks to an engine coming straight from Maxter's workshops, Arnaud Kozlinski won a heat, too. He then ended up against the bumpers of his team mate in the final, before he retired after an incident that happens once in a million times: his seat broke! On Sunday, it was Davide Forè's time to show his ability. The Italian climbed to the third step of the podium after Sunday's rainy race. Another brilliant performance came from Mirko Torsellini, who won Final 1 in KZ2. He also set the pole position as well as the best lap time in his category.

KF1: Looking for Top Performance
In a category that now adopts engines identical to those in KF2, Felice Tiene, Mathias Koykka and Jordon Lennox-Lamb managed to return to the top 10 in one of the two finals. And again, they had to catch up to achieve their results after some qualifying sessions where they would have deserved better. "Next time, we will have to do better in timed qualifying", the drivers admitted. As for Laura Tillett, she was among the five fastest drivers in Final 1, but overall her performance was not totally satisfactory during the weekend.

KF2/KF3: Third Podium for Verstappen
After conquering the pole position in the dry, Max Verstappen was also the fastest on track in the rain in the whole final phase of KF3. Though he was bumped into at the start of the pre-final, he staged an incredible catch up to second at the wheel of his CRG. A slight mistake in difficult conditions deprived him of a victory that was within his reach in the final. However, with this other second place, Max has made a very good start at his WSK Euro Series. Also noteworthy are Michelle Gatting's encouraging performances in KF2, considering that the Danish girl decided to enter the meeting at the very last minute!