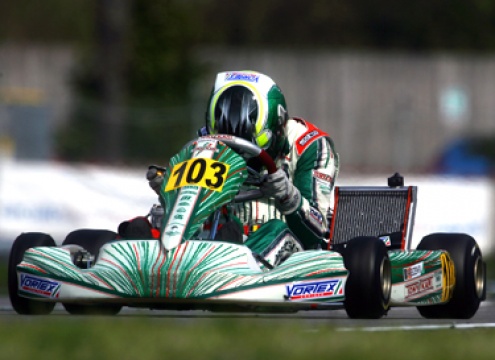 Euro Series begins for Tony Kart Racing Team with a wonderful double win in KZ1 category. In the most demanding and selective class Rick Dreezen preceded Marco Ardigò at the end of a solo-competition led by our colours. Tony Kart-Vortex’ success was live on Rai Sport Channel and on the web tv stop&go.


The winning day has been also framed by the success of Ocon in KF3 category, the French driver won at the drive of a chassis manufactured in our factory, the FA Kart. In KF2 and KZ2 categories we also gained the podium with Sendin and Doubek, respectively, both with a third position.

The week end’s facet is made up of two distinguished moments, different according to weather conditions. The first part of the big WSK event, from Thursday to Saturday, was under the sun and with a very well rubberized. The last part, regarding the final competitions on Sunday, was featured by rainy weather, and consequently raced on a wet track.

In both conditions our chassis proved to be highly competitive allowing our drivers, from all categories, to race at the top.

In KZ1 category Dreezen gains the second time during the heats, with 1.3.371, Ardigò takes the fourth position while Catt is twelfth. At the end of the qualifying heats, necessary to define the line-up at the starting grid in race-1, Dreezen leads a success and a second position while Ardigò is third, always in the fight for the success.

In the final-1 our drivers obtain an important podium, second position for Dreezen and third one for Ardigò, thus gaining the first important points for the Euro Series.

During the heats for the very final’s line-up on Sunday, the most important race giving full scores, Ardigò is leading both races and springs to the pole position.

The Final, run with rain tyres, sees us to be the very protagonists. Actually Ardigò gets involved with a competitor which tries to resist, and it is Dreezen, very fast, who takes the control while Ardigò’s spinning round and easily overtaking Forè, at the moment the leader.

Ardigò is now livening up the fight for the second position with fastest rounds and overtakings, but nothing is possible against the teammate Dreezen who wins and signs the best lap.

A further shiver comes at the beginning of the race, on Sunday, when Gary Catt runs out violently, after a collision, completely unintentional. Apart from a big fright, anything concerning our driver has been finally solved.

In KF1 category we did well during the qualifying heats, with a best lap and the Super Pole of Flavio Camponeschi.

Both Camponeschi and D’Agosto raced at the top during the qualifying in Final-1, with a success (signed by Camponeschi) and a real fight for the other races.

In Final-1 D’Agosto struggled for the podium, after leading the race, and ended up with a fourth position. Camponeschi, in the puzzlement for the win, has been obliged to stop for a technical inconvenient.

During the rounds for the starting grid classification, for the Final race on Sunday, our drivers were amongst the fastest, D’Agosto gaining a third position, behind Lock (Tony Kart Junior Racing Team) and Camponeschi, seventh. Unfortunately, what we expected to be a protagonists’ race, had a different consequence revealed during the very first beginning of the race, with the several collisions happened because of the slippery ground. D’Agosto had a hand to hand struggle with its front fairing detached and Camponeschi was pushed right away in the lawn. By the way, it is under the chequered flag that Camponeschi obtains its first points, important as they are in a so long WSK Euro Series’ Championship. In KF2 category Sorensen and Damiano Fioravanti are hardly working to get the better from the new category. Actually they showed off performances of fast and top drivers, racing as best drivers do, and just a few hitches, due to their lack of experience, prevented them to obtain the full success. Fioravanti both during the Final and the Pre-Final was in the top ten positions, obtaining some points and ending with a seventh position. Also Sorensen, thanks to a good recovery after the initial accident, obtained a quite good success.

Haruyuki Takahashi, at his debut in our Racing Team, clearly proved to have all the qualities to better take advantage of the Racer EVRR and gain the first position in KF3 category. Indeed, after entering the very Final, the Japanese driver showed off a very good performance during the race, which we hope it is just the prelude of a positive championship.

What we would also like to underline is also the Japanese drivers’ pride, Yu Kanamaru (KF1) e Haruyuki Takahashi (KF3), clearly upset for their Country’s tragedy, who raced wearing the black arm band.

Those who wish to see Tony Kart Racing Team’s success can follow the event on the web tv at www.stopandgo.tv.

All official classifications of the opening WSK Euro Series’ event at http://www.wskarting.it/

“KZ1 category’s success is clearly satisfying, I consider the Euro Series championship very important for KZ1 category, since it will assign the title in just four appointments and, as I previously said, it will be very important to be at the top with several drivers to yearn for the final success. In KF1 category, we were not so lucky, first we had a little accident and then a few collisions which prevented us to go straight to the podium. By the way we proved to have a winning potential and we will redeem ourselves in the next competition at Portimao. We can be satisfied with the final balance, our chassis were competitive both on dry and wet track.”