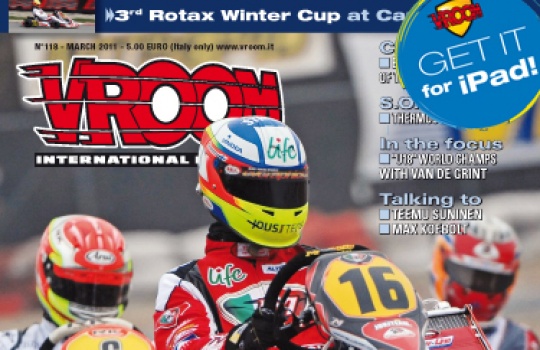 Numbers never lie! The Lonato Winter Cup, now at its 16th edition, has not lost in interest, as 248 drivers took on the grids for the first major title of the season. Teemu Suninen stood out in KF2 for Maranello grabbing his first international title, but all classes proved extremely competitive. All this, plus a lot more from the circuits around the world, together with the usually brilliant technical section, in Vroom March issue.
And don’t forget that Vroom is also available for your iPad on www.zinio.com

RACE REPORT – 16th Winter Cup
The kick off to the international kart racing season started with the 16th edition of the Winter Cup hosted at the South Garda Karting Circuit in Lonato, Brescia (I) with 248 drivers on grid. Everything went according to expectations on the eve of the event: very competitive, at all levels and a lot of uncertainty for the final result, with many protagonists ready to do their best.


TALKING TO – Teemu Suninen
Teemu Suninen, the new rising star of Maranello Racing Team, makes of pragmatism his trademark. Well before standing out in international racing with Maranello Finnish importer Redstep – the same one where World Champion Aaro Vainio moved his first steps – Teemu hit a strong series of successes at national level, which demonstrate a simple truth in racing: winning is what matters!


RACE REPORT – 3rd Rotax Winter Cup
2010 Euro DD2 revelation Simas Juodvirsis had to work hard to take the glory in Spain, as the next generation of young drivers in the 2-speed class forced the competition to be extremely close in the battle for the 2011 Winter Cup title.


CLOSE UP – Behind the scene of the Winter Cup
There was great curiosity to see the new colours of some teams. And it’s here at the Winter Cup that you get an idea of what the karting movement that is taking part in the titled races for this season is going to be.


TALKING TO – Max Koebolt
This is why Max Koebolt, born in 1997, and for the first time in force with CRG, chooses “Bolla”, acknowledged as one of the veterans out of the mechanics … one of the best, for his launch into the international field.


CLOSE UP – Australia tracks flooded
Extreme weather has ravaged the entire country over recent times with extreme flooding throughout Queensland, Northern New South Wales and Victoria. As the clean up phase continued, Queensland was then hit by tropical cyclone Yasi. 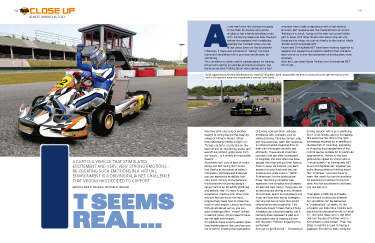 CLOSE UP – Kart simulator
A kart is a vehicle that stimulates excitement and very, very strong emotions… re-creating such emotions in a virtual environment is a DrivingItalia.NET challenge that Vroom has decided to support. 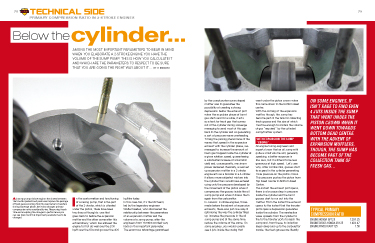 TECHNICAL SIDE – Primary compression ratio in 2-stroke engines
Among the most important parameters to bear in mind when you elaborate a 2-stroke engine you have the volume of the sump pump: this is how you calculate it and which are the parameters to respect to be sure that you are going the right way about it…


S.O.S. KARTING – Thermostatic valve and union tee
Here we are again trying to give you a bit of technical advice or even the solution to one or two “seasonal problems”…


VINTAGE – 125 Double-cylinder – part 1
125 double cylinder engines have written an important page in the history of karting. Which were the most powerful? Why did they leave the scene? How would a double cylinder work in karting today? 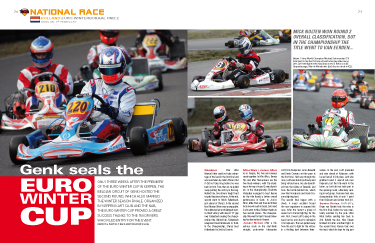 NATIONAL RACES
Despite kart tracks all over the world are being hit by awful weather, drivers cannot longer wait to wear their helmets. So national series waved the first chequered flag of the season, and we report on the Gatorz Challenge of the Americas from the USA; the Brian Farley Memorial and Rotax Pro Tour from Australia; and the second round of the Winter Bokaal from the old continent.


COLUMNS – Mondokart, April National & International racing calendars
We open the news section with a feature on AMV presence at the Offenbach Show, a real mind-blowing experience for the many who visited the classic fair in Germany. Also, not to miss, a global outlook of the Rotax experience novelties. Plus, the Easykart European final turned into a two-round series.
Ending with April national calendars: 47 events from 19 countries around the world, as well as 4 major international races.